Last week, I shared my Spotify and Apple Music playlists that attempted to put Louis Armstrong's 1929-1934 output in the context of revolutionizing more than just jazz, but popular music as a whole. The goal was to illustrate how Armstrong transformed the same songs and arrangements utilized by many of the white popular dance orchestras and crooners into the swinging embodiment of Black American Music at its finest.

By the end of the playlist, Armstrong was over in Europe dealing with fading chops and managerial drama (all detailed in my new book, Heart Full of Rhythm: The Big Band Years of Louis Armstrong), but his impact was finally being more fully realized back home as the pop music world was about to morph into "The Swing Era." Yes, Benny Goodman soon began creating a stir with the arrangements of Fletcher Henderson, teens started dancing at the Palomar and the music world was overtaken by the likes of Count Basie, Duke Ellington, Jimmie Lunceford and other great big bands and jazz lived happily ever after as America's popular music.

Well, that's true to an extent but it's not the full story. The pop sound of the likes of Guy Lombardo didn't exactly disappear overnight and though jazz and swing was more accepted into the mainstream than anytime before (or after), they weren't the only sounds on the airwaves.

Enter Louis Armstrong, back from Europe, his lip recovered and his career now in the hands of Joe Glaser. Glaser signed Armstrong up with Jack Kapp's new label, Decca, home of pop artists Lombardo, Bing Crosby, Ted Lewis and Victor Young, in addition to jazz stars like Lunceford, Henderson and Art Tatum. Kapp immediately identified Armstrong as a versatile artist like Crosby, one who could record love songs, novelties, swinging instrumentals, Hawaiian music and much, much more.

On October 3, 1935--85 years ago today--Armstrong began his long association with Decca, recording four songs with Luis Russell's Orchestra--soon to be turned into Louis Armstrong's Orchestra. Armstrong's Decca recordings are wonderful on their own--I recommend The Decca Singles 1935-46 as the best way to listen to them, as they're pitch corrected unlike almost all other reissues (here are links to Apple Music, Spotify, Amazon and YouTube)--but once again, for this series, I created another playlist putting Armstrong's Decca sides, and 1946-47 RCA output, alongside "poppier" versions of the same songs from the same era or earlier. 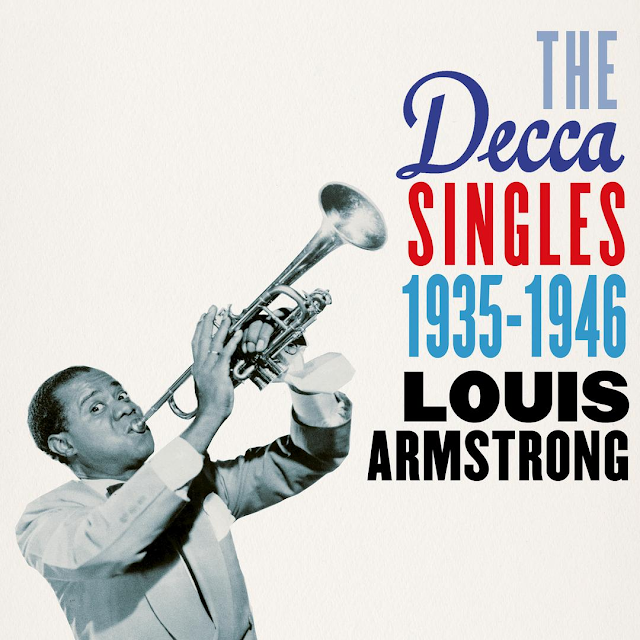 However, unlike last week's efforts, I was stymied by Apple Music and Spotify. I'll admit, I was actually pleasantly surprised at how easy it was to put together those 1929-1934 playlists because both of those streaming services have loads of pop and dance band music from the 1920s and early 1930s. But when I attempted a similar playlist for 1935-1947, it was impossible on either Spotify or Apple as there's almost none of the pop sides up there, all of it understandably obscured by the jazzier recordings of the Swing Era.

But then I went to YouTube and struck paydirt. I don't know who they are but God bless the folks who have uploaded hundreds of 78s of just about everything from the 1930s and 1940s. Once I started, I couldn't stop and ended up putting together a playlist of 254 tracks covering 1935-1947!

I will admit, it was tricky because some of the contemporary versions of songs Armstrong recorded were done by other jazz geniuses of the era and I wanted to avoid those when possible; we know Fats Waller and Billie Holiday are great and we know that they were both both influenced by Armstrong, too, I usually left those on the cutting room floor in favor of pop versions (Fats introduced "I've Got My Fingers Crossed" and his record is fantastic but I chose one by Alice Faye to juxtapose with Pops). But in some cases, where other versions were difficult to find, I went with the jazz side.

Enough from me--listen along by clicking HERE or just start the playlist rolling below!

And that's it, with this playlist, last week's playlist and the individual "Soundtrack to a Book" chapter-by-chapter playlists I shared last month, you now have way more than you'll ever need to listen along while you read my book.