The Eternal Debate: Louis vs. Louie

I get asked a lot of questions about Louis Armstrong but one in particular stands as the most oft-asked of them all:

"How do you pronounce his name? Louis or Louie?"

Oh boy. I can hear the guns coming out of their holsters as I type this.

I've kind of perfected my personal answer over the years but I'm not sure if I've put it in writing. So here goes.

The correct way to pronounce the first name of Louis Armstrong is......who cares?

Now, was that so hard? Now, not only are the guns out of the holsters, but I'm sure they're being cocked and aimed in my direction. Before you shoot, though, let's consult the evidence.

THE CASE FOR "LOUIS"

I admit, I tend to call him LouiS Armstrong with that hard "s" sound. Why? It really does seem to be his preference. Almost every single time he spoke his name, it came out "Louis." More importantly, in the June 13, 1947 issue of P.M., Armstrong reminisced about his mother, Mayann, and said this: 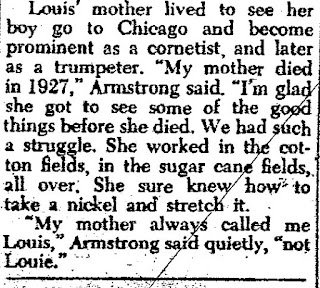 In case the image doesn't load, the article ends with Armstrong saying, "My mother always called me Louis, not Louie."

Point in favor of Louis.

Then there's the famous story of "Hello, Dolly!" Producer Mickey Kapp had the idea that Louis should change the lyrics to "Hello, Dolly, this is Louie, Dolly." In fact, we have Armstrong's original part at the Louis Armstrong House Museum and sure enough, where it states, "Hello, Dolly, Well, Hello, Dolly," someone scratched out the second "Hello" and wrote "It's Louie." But according to Kapp himself in Terry Teachout's Pops, Louis hissed back, "It's Louis!" And sure enough, when he sang it, he really holds that "s," "Hello, Dolly, this is Louisssssssss, Dolly." He continued the trend, referring to himself as "Louis" on "So Long Dearie" in 1964 and "The Life of the Party" in 1965.

We rest our case. And because of those three pieces of evidence--Louis's pronunciation of his first name in interviews, his statement that his mother never called him "Louie" and the saga of "Hello, Dolly!"--is enough for many to feel more comfortable in calling Armstrong "Louis." I know that's my reasoning for tending to stick with "Louis." (There's also a couple of quotes that come from Lucille Armstrong that have appeared in multiple bios, namely arguing that Louis wasn't French and that he once said, "All white people call me 'Louie,'" but we'll come to Lucille in a second.)

THE CASE FOR "LOUIE"

Okay, we've established that Louis Armstrong himself tended to go with "Louis." So who called him Louie?

Not just "all white people" but the black press often called him "Louie" during the Swing Era, something that surprised me when I started researching my second book. Here's a Pittsburgh Courier page from 1935: 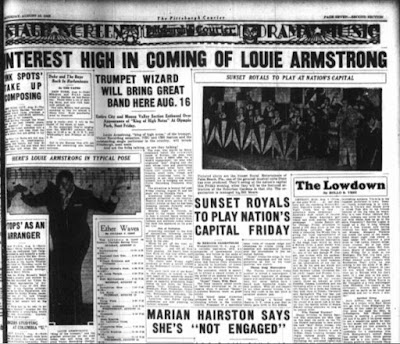 And then there's the other recordings. "Dolly" is a strong story.....but what about "Laughin' Louie" from 1933? The Mills Brothers shouting, "Louie!" before the trumpet solo on "Marie"? Gordon Jenkins's choir chanting, "Louie" on "Chloe-E"? And what happens AFTER "Dolly" becomes a hit? Armstrong refers to himself as "Louie" on "Mame" in 1966 and records "Louie's Dream" in 1967!

What have we learned? My takeaway is Armstrong preferred "Louis" and that's how he gave his name but he never bristled at being called "Louie." In fact, the man himself admitted as much. This whole post was inspired by a message I received from Jim Syoen, a wonderful tuba man in New Orleans. Jim said that a 90-year-old clarinetist he knows once spent an hour with Armstrong before a concert in St. Louis during the All Stars era. This clarinetist asked the question directly and this is how he remembered the answer: "I prefer to be called Louis. A lot of people call me Louie, which is fine, but my given name is Louis."

So there you have it...maybe. I feel like this is some kind of Rorschach test--"Louis" folks will see "I prefer to be called Louis" and "Louie" folks will see "which is fine"--but that leads me back to my original answer:

If you are talking about Louis Armstrong and call him Louis or Louie or Pops or Satchmo (don't you DARE start that nonsense that Louis "hated" Satchmo.....he loved it, had it on his stationary and told the press that it was part of his name and to never put it in quotes), I am THRILLED! In this already divisive era, can the pronunciation of Louis Armstrong's name be something we don't fight about?

Anyway, thanks for reading......Am red beans and ricely ours.....Ricky Riccardi. (I don't usually sign off on my blog posts but just wanted to remind readers of my own first name: my birth certificate says "Ricky" and that's what most people call me and that's definitely how I always give my name. But almost my entire family, and a lot of friends I went to school with, call me "Rick." Do I hate them? No! Does it bother me? Not at all. Ricky Ricardo on the other hand......)