It all started 25 years ago today....I think. Well, in all truthfulness, the events of August and September 1995 are almost just as important as what happened on this date. For those unfamiliar with my "origin story," in the late summer of 1995, I was going through phases of watching both Woody Allen and James Stewart movies (for someone born in 1980, I might have been the only 15-year-old going through those phases at the moment). My father had already introduced me to Louis Prima and I loved his Capitol recordings (still do!) but then I saw Woody Allen's "Sleeper" and heard the jaunty music on the soundtrack and immediately responded to it. The credits said "Preservation Hall Jazz Band" which was all I needed to go to the local library and check out their Greatest Hits on a Columbia cassette. Completely coincidentally, the Preservation Hall Jazz Band was on tour and hitting Harrah's casino in Atlantic City in mid-September. That was the weekend hangout for my grandparents so they got us comp tickets for my birthday and I had my first live experience with live New Orleans jazz on September 16, 1995. I was hooked. (Side note: the band included Ben Jaffe, Joe Lastie, Rickie Monie and Wendell Brunious, all friends today!)

Now I wish my memory was better at this point but somewhere in the second half of September, my Jimmy Stewart phase led me to The Glenn Miller Story. In the middle of the film, Louis Armstrong appeared on screen and did "Basin Street Blues." Whoa! The whole thing fractured me. My ears heard the trumpet-trombone-clarinet thing and my brain immediately made the connection, "Oh, this sounds like Preservation Hall and Louis Prima--cool!" But then Louis sang and again--whoa! What a voice, what a smile, what a personality. Then the tempo change, a drum duel between Gene Krupa and Cozy Cole took place and Pops led the way out with a high note. The seed was firmly planted--I needed more.

Which brings me to today's anniversary, October 9, 1995, Columbus Day. Off from school, I asked my mother to take me to the place all the cool kids congregated: back to the Ocean County Library. Once there, I made a beeline for their Armstrong cassette section. There was a bunch of "greatest hits" releases and I didn't know which one to choose so I grabbed this one, "16 Most Requested Songs." 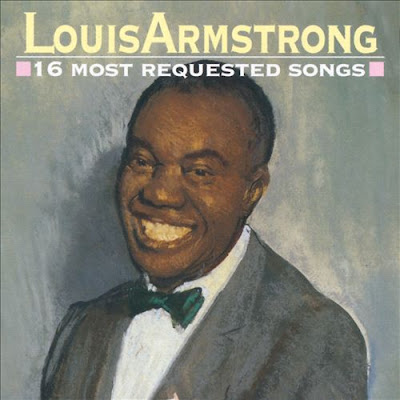 It turned out to be a compilation of Armstrong's 1950s Columbia recordings, produced and with liner notes by George Avakian. I still remember being grabbed by opening, Louis intoning "Dig man, there goes Mack the Knife!" Then a few tracks later, "All of Me," my grandfather's favorite song! On and on it went as I really enjoyed the fireworks on songs like "Indiana" and the live feel of stuff like "Do You Know What It Means to Miss New Orleans" (Billy Kyle's piano interlude made an impression on this budding pianist) and "That's My Desire" (where Armstrong's use of "chops" gave me a laugh). All was going well and I just knew that this was going to be the start of something.
And then IT happened.
Track 14.
"St. Louis Blues" from Louis Armstrong Plays W.C. Handy.