My book, Heart Full of Rhythm: The Big Band Years of Louis Armstrong, has been out for about a month now and I've been extremely gratified by the initial reactions coming in from friends around the world. JazzTimes ran a lengthy excerpt in its latest issue and I've done interviews about it  with Library Journal, Josh Jackson of WRTI, on Marcus Smith's radio show Constant Wonder and on Larry Powell's StudioHFL (a fun 68-minute conversation). The Amazon reviews have been unanimously five-stars and though it might sound silly, they do mean a lot so if you like what you're reading, feel free to hang a rating on it (and if you don't like what you're reading, pretend I never said anything).

In my last blog, I provided a "Soundtrack to a Book," with links to chapter-by-chapter playlists on Spotify and Apple Music that contained just about all the Armstrong recordings I reference in the text. I thought it was a fun way to listen along while reading but it didn't hit me until a few weeks later that those playlists were too concentrated on Armstrong. I know, too much Armstrong can never be considered a bad thing but context is key, especially in the periods I deal with in the book.

A big theme is that Louis was bigger than jazz and that the recordings he made between 1929-1934 had a titanic influence on not just jazz but pop music in general (a bigger influence than the Hot Fives and Hot Sevens....yeah, I said it). Coming from a jazz background, we normally want to take out Louis's solos on these big band sides and compare them to what's going on with Bix Beiderbecke and Jabbo Smith and Coleman Hawkins and all the great jazz soloists.

That's fine, but it's kind of missing the larger picture. When OKeh switched Armstrong from making "race" records to making "popular" records in 1929, they were setting him up to compete with the likes of Guy Lombardo, Rudy Vallee, all the dance orchestras and crooners of the time. Armstrong was given the same songs and in many cases, the same stock arrangements to work from. What he did with them, to my ears, represents the height of what Nicholas Payton refers to as the impact of Black American Music on the pop music scene. It's bigger than jazz.

Some writers have used this period as the start of the "tragedy" of Louis Armstrong, forced to adopt Guy Lombardo's saxophones and other "white" elements to get ahead. If you read my book, you'll know how I feel and more importantly, how Louis feels about such arguments (I won't spoil it, but the initials are B.S.). To me, it's a much more fascinating and rare example of something that usually happened the other way around. Think of jazz finally getting acceptance in the mid-1930s once all the big "Swing" bands became popular. Then think of the 1950s with all the lame white covers (Pat Boone, we're looking at you) of all the big R&B and early rock hits.

But here's it's the opposite. Louis is saying, "Fine, I'll play your songs, I'll sing, I'll improvise, I'll use a big band and a stock dance orchestration.....but what I'm going to do with it is unlike anything you've ever heard before."

And the biggest thing is the visibility OKeh gave him by putting him on the pop side. Jazz historians will always leap over themselves to make sure Louis doesn't get all the credit--"Hey, he wasn't the first great soloist, Bechet was!" or "Jabbo was more interesting," that kind of stuff--but they can't deny the visibility Armstrong had. Who knew Sidney Bechet and Jabbo Smith by name in 1930? But Louis Armstrong's records SOLD.

I reference this in the book but thought I'd share a visual here. Record companies didn't release sales information in this era and the music trades didn't care as published sheet music sales was much more important than the number of records sold. But in December 1931, Variety began listing monthly best sellers by label in three major cities: New York, Los Angeles and Chicago. Here is the list of the most popular records from April 1932: 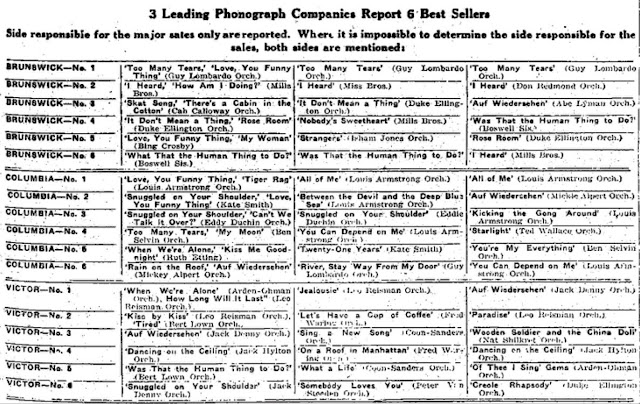 Look who is topping the Columbia pop charts in each city: Louis Armstrong! That's New York on the left with "Love You Funny Thing" backed with "Tiger Rag" in the number one slot, while "All of Me" was number one in Chicago (middle column) and Los Angeles (right).

But that's not all: "Between the Devil and the Deep Blue Sea" was number two in Chicago, "Kicking the Gong Around" was number three on the West Coast and "You Can Depend on Me" was number four in Chicago and number six in L.A. Domination.

Now look at the rest of the charts: there's some Ellington, some Mills Brothers, the Boswell Sisters, but that's it from the jazz world. Louis was competing with Kate Smith and Ben Selvin and Ruth Etting and Eddy Duchin and even his "inspirator," Guy Lombardo....and was winning. The man was already a pop star in 1932. In January 1932, Victor A&R man Eli Oberstein said under oath that Louis Armstrong was the biggest selling recording artist of 1931, bar none. Yet, these are the "tragic" years, marred by subpar bands, love songs and all that jive? Nah.....

This brings us to the point of this whole post. Last week, utilizing Spotify (love it or hate it), I put together a massive (nearly 10 hour) playlist featuring just about everything Louis recorded between 1929-1934 but in each case, I preceded Armstrong's recording with 1, 2, sometimes 3 or even 4 contemporary pop versions of the same song. I largely eschewed some of the more famous jazz performances of these numbers, though you'll occasionally hear from Bix or Jack Purvis or Duke Ellington.

I've been doing this in my lectures and classes for years but with the release of the book, my theories are now out there for the public to debate and I thought this playlist was a good way to really place Louis in the proper context. I posted it last Sunday and the reaction has been quite wonderful. Of course, the anti-Spotify crowd (I get it) is quite vocal so last night, I created an extremely similar playlist on Apple Music. Of course, each service was missing certain songs--there's a "Song of the Islands" on Spotify that knocked me out because the arrangement is so similar to Louis's but it wasn't on Apple, Apple didn't have any other versions of "Mississippi Basin" and neither provider had Louis's "Wrap Your Troubles in Dreams"--so the two lists aren't exactly mirror images, but it's close. (And for those who started listening to the Spotify playlist when I first posted it last Sunday, I've continued tinkering with it, adding more performances and substituting other transfers in better sound quality when possible.)

S'all for now--listen along below and let me know your thoughts!