It all started 25 years ago today....I think. Well, in all truthfulness, the events of August and September 1995 are almost just as important as what happened on this date. For those unfamiliar with my "origin story," in the late summer of 1995, I was going through phases of watching both Woody Allen and James Stewart movies (for someone born in 1980, I might have been the only 15-year-old going through those phases at the moment). My father had already introduced me to Louis Prima and I loved his Capitol recordings (still do!) but then I saw Woody Allen's "Sleeper" and heard the jaunty music on the soundtrack and immediately responded to it. The credits said "Preservation Hall Jazz Band" which was all I needed to go to the local library and check out their Greatest Hits  on a Columbia cassette. Completely coincidentally, the Preservation Hall Jazz Band was on tour and hitting Harrah's casino in Atlantic City in mid-September. That was the weekend
Post a Comment
Read more 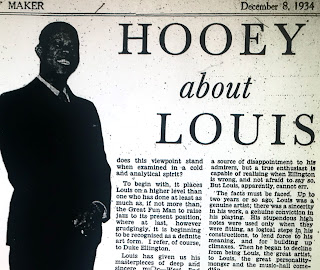 Hooey About Louis: The "Jazz World" vs. Louis Armstrong