We're getting closer by the minute to the April 10 release of The Complete Louis Armstrong Columbia & RCA Victor Studio Recordings 1946-66 by the good folks of Mosaic Records. Earlier this month, I posted three videos of me discussing the minutia of set, explaining some of the crazy amounts of splicing and editing and discographcial detective work that went into putting the set together.

I did it just to get these stories down for the record because putting together this set was a dream come true--and one gigantic headache. Somehow, there's been a positive enough response to my blathering that I decided to keep going.

This blog will my feature my latest two soliloquies, each one weighing in at just under a half hour (so plan accordingly). The first one actually bridges the two Mosaic sets worked on, the first one being Columbia and RCA Victor Live Recordings of Louis Armstrong and the All Stars 1947-1958. That set included Louis's complete 1956 Newport Jazz Festival set, released in full for the first time. If you're of a certain vintage, you might own this Columbia LP produced by George Avakian: 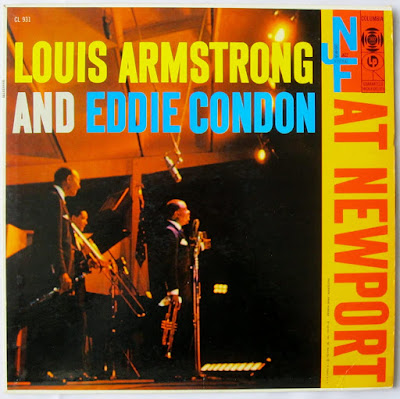 Alas, that wasn't exactly truth in advertising, as two of Armstrong's four songs were from different occasions. And in the case of "Mack the Knife," George Avakian pulled off one of his most audacious uses of splicing, using the opening and closing choruses from an unreleased performance at Lewisohn Stadium (actually recorded after the Newport date) and the vocal from a leftover studio performance from September 28, 1955! None of this was deliberately George's fault as the Lewisohn version and the Newport version each had insurmountable problems when it came to the vocal. What kind of problems? That's the subject of this first video, which explains just exactly what we went through to reconstruct those performances for the 2014 set, while also previewing the complete studio take that will be a part of this April's set:
This next video though might be my piece de resistance, a 29-minute deep dive into one of my desert island Armstrong tracks, "Blue Turning Grey Over You." The master take is a masterpiece but it's another Avakian Frankenstein creation with a first chorus from take 4, a vocal from take 5 and a concluding trumpet solo that was 95% from an insert take in between takes 3 and 4.
However, that 5% of the trumpet solo proved to be quite a challenge for Avakian. He must have made an an edit and, unsatisfied with the results, attacked the pristine session tapes to take a few more chunks needed to finish the job. He then stuck some of the chunks he didn't end up using back on the reels. When we listened to the session tapes and the work reels, there wasn't one single version of the insert take or take 5 that had a complete, unedited trumpet solo.
What to do? Well, after more careful listening, I identified that the missing mystery bits were on the album...and constituted only a handful of notes. I created a roadmap for the geniuses at Meyer Media, followed to perfection by Nancy Conforti. The finished results will be on the Mosaic set, but you can hear a taste of it towards the end of this video.

That's all for now but I've already gotten some requests to do "Long Gone" next, plus I'd like to do a short one on "Tain't What You Do" and I've promised a written, not spoken, blog about the differences between the 1954, 1955, 1986, 1997, 2000, and 2021 reissues of Louis Armstrong Plays W. C. Handy and Satch Plays Fats as I'm sure there's some folks out there like me who will have all of these (not to mention the Spanish bootleg "Complete" editions of each album which the Mosaic will render far from complete).

Get those pre-orders in, we're almost there!