Behind the Scenes Videos - The Mosaic Way!

Last week, I nearly exploded with glee on this here blog when given the green light to finally announce the new 7-CD Mosaic Records boxed set, The Complete Louis Armstrong Columbia and RCA Victor Studio Recordings, 1946-1966, due out April 10. The reception has been gratifying to say the least. Look at that cover again--it's a beaut! 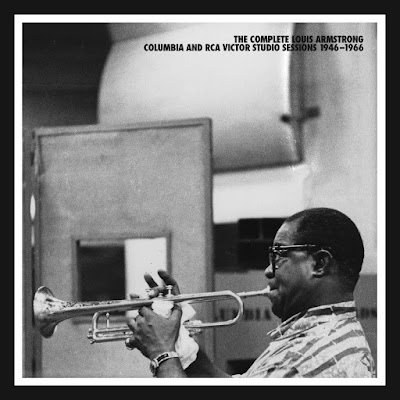 Co-producer Scott Wenzel, a Mosaic legend, has called this the most difficult set he ever worked on. I think that's probably an understatement; untangling the discographical nightmare of the 1950s and 60s tape sessions was a nightmare. Aside from the music on the set, check out Scott's final discography, up on the Mosaic site now. I don't even want to guess how many drafts it went through as we kept discovering stuff right up until the final deadline but if you ever wanted to know how Louis Armstrong Plays W. C. Handy, Satch Plays Fats and The Real Ambassadors went down, the whole story is there.

Why all the headaches? For Handy and Fats, the answer is complicated. First off, my hero, producer George Avakian, used his controversial methods on each album--splicing and editing together the best portion of each takes to make the ultimate master tracks--though it's always worth pointing out that the artists were fully in favor of George's techniques as it resulted in the most satisfying listening experience....and a discographical nightmare.

George aside, Columbia Records didn't do any favors when in the late 60s, they "enhanced" the master tapes with the electronic nightmare known as Dolby, rendering them unlistenable. On top of that, the work reels were absolutely gutted. George kept some complete unedited takes but other ones had chunks ripped out as they were spliced directly onto ruined masters.

This is the situation Michael Brooks, an industry legend who passed away recently, found himself in when he was hired by Columbia in 1986 to oversee the first compact disc reissue of each album. The masters were unusable and the leftover work reels were missing material that only existed on the finished album. Brooks did his best to use unedited takes and to make new composites, but in the end, was crucified by those who were intimately familiar with the original LPs.

In the 1990s, Columbia, now owned by Sony, enlisted the help of George Avakian himself to straighten it out. George was aided and abetted by tubaist and Armsrong worshipper David Ostwald for an incredible crusade detailed in the liner notes of the eventual 1997 reissue of Handy. Basically, George found clean master tapes of the Extended Play version of the album, which was pretty close to the original Long-Playing version but did feature some tracks edited down for time. George and David used what they could from the EP tapes and to fill in the chunks, borrowed a pristine first pressing LP from Jack Bradley and just did a pretty incredible "needle drop" transfer.

When Sony hired Avakian and Ostwald again to oversee the 2000 reissue of Satch Plays Fats, the Gods looked down upon them and a complete, pristine set of the master tapes turned up in another country (I believe France but might be wrong). They just had to do a straight transfer, but had some fun with the "edited alternates," a subject for a future post.

Thus, when putting together this set, we were actually in good shape with the master takes of each album thanks to George and David's original work. But trying to make alternate takes from the session tapes....THAT was the struggle. However, I was confident it could be done because George and David gave me a cassette dub of the session tapes in 2008 and I memorized every second of them and made my own quick-and-dirty edits, taking segments from the original LPs and filling in the gaps that were missing on tape.

I've already written more than I planned--this story is complicated--but it's more fun to listen. To demonstrate what I lovingly refer to as "The Mosaic Way," I've started making videos on my personal Facebook page. I've done three since the summer and got a nice response but I also heard from some folks who wanted to share them with friends who don't have Facebook. Thus, I've uploaded them to YouTube and am now sharing them here.

First thing you have to know--this music is serious business but when I start getting into the minutia, I hear myself and I can't help but turn on the self-deprecation because really, who is the audience for detailed discussions of splices and edits? Not helping the matter was the fact that my kids filmed the first two and couldn't hide their glazed looks, inspiring some lowbrow spit takes in the second video, which broke up the monotony. The presence of the kids also helped me keep it streamlined lest be accused of child abuse. Left to my own devices in the final video, I went on for 23 minutes about "St. Louis Blues"; proceed with caution. Donuts are also present in each video; if you know me, you'll understand, if you don't, don't worry about it.

I mention their names multiple times in the videos but the final edits were performed by the geniuses at Meyer Media, led by Andreas Meyer and his team, Nancy Conforti and Noelle Byer. Bless 'em all!

In this first video, I explain how we fixed something on "Atlanta Blues" that had been driving me crazy since 1997. When putting together that reissue, the nearly 80-year-old Avakian had to break out his old razor blade to go from Armstrong's vocal (with overdubbing) on the pristine record to the clarinet solo by Barney Bigard on tape (the tape didn't have the overdubbed vocals). George just missed it by a hair, resulting in the shaving off of part of a beat that threw off the momentum for a second. Meyer Media fixed it!

In this next video, I discuss "Beale Street Blues." It only took Louis two full attempts to get through it. On the LP, it's almost entirely take 2 except George cut to take 1 for the very end of the vocal and the interlude before the trumpet solo. Unfortunately, on the session tape for take 1, that entire chunk was removed. The Meyer Media crew used the spliced LP take to take that chunk out and place it back in take 1 where it belongs.

And finally, my 23-minute opus on "St. Louis Blues." I tried my best to explain it and even confused myself a few times but basically, this is the story in writing. To my ears, the 1954 LP take always seemed like it was splice-less, a pristine take 4. Then George and David gave me the session tapes and there was a take 3 alternate that was completely different than the LP version; I A/B'd it and everything. There was something that sounded a tiny bit like a splice going into the rideout but I had an explanation. When Michael Brooks did the 1986 reissue, he, too, could only find the shorter EP edit, which eliminated Barney's clarinet solo, the second vocal and Trummy Young's trombone solo, so he must have taken that whole chunk for the alternate take 3 and just shoved it into the EP take, then must have had to splice it back into take 3. Makes sense to me!

But while doing the transfers, Matt Cavaluzzo noticed TWO splices in take 3, the one in the rideout, and one towards the end of the vocal. I just explained my conspiracy theory from above and we went ahead with it, right to the final step of mastering, the booklet and the discography: two takes, an alternate take 3, and the LP take 4, the end.

But while mastering it, Nancy Conforti could not get around that during Louis's first vocal, Trummy Young's trombone abruptly disappears and wanted to be sure we were aware of it. As I say in the video, "Captain Mansplain" rushed in to explain the above nonsense and still paid it no mind....until I listened more carefully to the original LP and in the spot Nancy mentioned, heard Trummy Young's trombone abruptly APPEAR from out of the blue!

It was at that point that I consulted George Avakian's originally handwritten notes and noticed that he did like elements of take 3 better and sure enough, I was wrong. The original LP features take 4 to that Trummy moment, then take 3 until the end of Trummy's trombone solo, and then went back to take 4 until the finish. The 1986 Michael Brooks CD turns out to have a complete unedited take 4. And now, using FOUR different sources--tapes, the CD, a pristine LP--we were able to reconstruct take 3 as it went down in the studio.

Got it? If not, here's my 23-minute explanation with plenty of audio clips!

At the time of this writing, I'm already planning some more. The saga of "Blue Turning Grey" would also take about a half hour. There's a wild "Mack the Knife" story that relates to Newport and the 2014 Mosaic set we put together that would require 15 audio clips. I don't know if I can even accurately describe the untangling of "Long Gone." George also did a little chicanery on the "rehearsal" version of "Loveless Love" that this set undoes and that I can explain.

Thus, in a month or so, I'll have a post with some more videos. I'd also like to do a post definitively comparing the takes on the 1954/1955, 1986, 1997, and 2021 editions. Any questions from the public? Any requests? Let me know and I'll do my best to explain between now and April 10. Thanks for reading and watching--have a great weekend and PRE-ORDER, PRE-ORDER, PRE-ORDER!