Celebrate the New Year with Pops!

2009 is upon us, my friends, but it's too late to squeeze in one last post in the old year. I know I've disappeared for the last week but after well-over a hundred posts this year, I think I could be forgiven for taking a little holiday break, the highlight of which came on Sunday night as I spent the evening with Margaret at David Ostwald's holiday party in New York. Naturally, it was a Pops love-fest with Ostwald, Dan Morgenstern, Joe Muranyi, Michael Cogswell and others in the house. And of course there was non-stop music, with a band full of revolving personnel, including Muranyi on clarinet, Sam "Leroy" Parkins on tenor saxophone (he made the 1933 Coleman Hawkins come alive), Dan Block on clarinet, Andy Farber on saxophone, Jim Freyer on trombone, Howard Alden on banjo, Cynthia Sayer on banjo, Alan Cary on guitar, Ed Polcer on cornet, Charlie (didn't get his last name but he was great!) on cornet, Giampaolo Biagi on drums (well, really, snare, hi-hat and ride, but oh did he make 'em swing) and Vince Giordano on bass, piano, guitar, drums and vocals.

The highlight of my night, and one of many from 2008, was when Ostwald asked if I wanted to sit in. I play frequently around the sleepy suburbs of south Jersey, but these guys were the pros so there was more than a little nervousness involved. But I hung in there and managed to have an incredible time jamming on the blues, "I Got Rhythm," "When Day is Done," "Dinah," "Sleepy Time Down South" and "Avalon." It was amazing, jamming with my heroes, and fortunately, I have a few photos to prove it! Here's myself and drummer Biagi getting the final jam of the evening started: 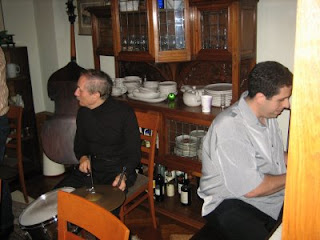 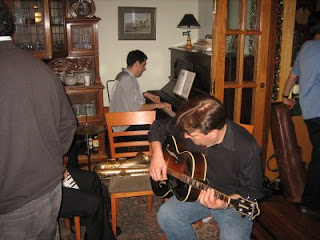 Joe Muranyi couldn't resist and took the lead on "I Got Rhythm": 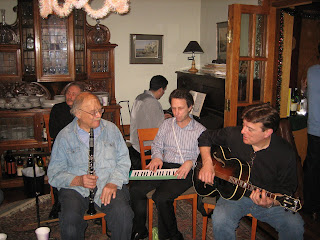 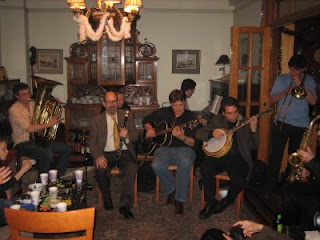 A great time I'll never forget, that's for sure. 2008 was a year I'll never forget, of course, with the pregnancy, the new house, the New Orleans trip, the book deal and the general growth of this blog from completely unknown to marginally unknown. The anniversary posts got a lot of positive feedback and next year should be no different. It will be the 50th anniversary of Armstrong's mammoth 1959 tour of Europe and I have so much material from that trip that you can expect multiple postings on the subject. But there will be more: 85 years of "Everybody Loves My Baby" and "Cake Walking Babies," 80 years of "Mahogany Hall Stomp," "Ain't Misbehavin'," "Black and Blue," "When You're Smiling" and "Rockin' Chair," 75 years of "On the Sunny Side of the Street," 70 years of "What Is This Thing Called Swing," 65 years of the Esquire Metropolitan Opera House concert and the V-Disc jam session, 60 years of "Blueberry Hill" and so on. I don't know how many I'll get to do with the book and the baby increasingly taking up more time, but I'll definitely get to most.

But today is New Year's Eve and that's always a big day for a musician, including Pops. In my files, I have four separate Armstrong broadcasts from different New Year's Eves, which should give me at least something to post for the next four years. But where to start today? 1953? 1954? 1962? 1967? They all have great moments but right now I want to share one that recently came to make courtesy of the great Armstrong discographer Jos Willems. It's from December 31, 1967, fairly late in the game, but I think it's a wonderful little show.

Armstrong's health had been up and down for most of 1967 but by the end of the year, it stabilized and he continued working at his old non-stop rate. He didn't blow as much as he used to and sacrifices had to be made here and there but when he was on, he was on and on this broadcast, he's on. The All Stars consisted of Joe Muranyi on clarinet, Tyree Glenn on trombone, Marty Napoleon on piano, Buddy Catlett on bass and Danny Barcelona on drums and the venue was Las Vegas. Like everything else, the show began with "Sleepy Time":


And then it was on to "Indiana," the standard opener for so many years. I didn't have this version when I did my massive "Indiana" blow out a few months back but I think it's a great one. By this point, Armstrong stopped playing the famous solo, saving his chops for the two ensemble choruses up front and the rideout at the end and I think he sounds damned good throughout:


Then it was time for one of his most recent records, recorded in August 1967, "What a Wonderful World." Do I have to say any more?


Next was something to get the blood pumping, "Tiger Rag," which had lasted about 90 seconds since the early 60s. Armstrong used to blow like mad on this one but time and age took its toll a bit as Armstrong mainly stayed in the background and played a lot of quarter and half-notes. It's hard to hear much of what he plays but it's still a good feature for Muranyi and Armstrong does manage to hit the high note at the end:


Next, time for a feature as Buddy Catlett gets to "boot one out" on "Wrap Your Troubles in Dreams," featuring some more nice Pops towards the end:


And finally, my favorite moment of the show and one of my favorite moments from the period. The band goes into "Sleepy Time" and the announcer says that the broadcast is over. However, the announcer is a little premature and there's about a minute-and-a-half left so Armstrong keeps it up until he gets the signal that the show is over. He responds by improvising more than he usually did on his theme and I think he sounds wonderful. Enjoy it:

And that's that, a nice, short and sweet broadcast from 1967 showing that Armstrong was still getting it done so close to the end. I hope you enjoyed it and everything else shared year throughout the preceding year. Thanks to all those who have written with kind words and suggestions and I hope it continues into next year. Here's to 2009!
Labels: Louis Armstrong Jazz Swing Trumpet Satchmo Ricky Riccardi