Baby, It's Cold Outside

It's raining where I live in New Jersey but it's snowing pretty bad in New York City, causing Kathie Lee Gifford on the Today Show to sing a few bars of "Baby, It's Cold Outside." I've been hearing the tune in every mall I enter these days and it just made perfect sense to do a quickie entry on the tune. Frank Loesser wrote the famous duet in 1944 but it didn't reach the public until the 1949 film, Neptune's Daughter. After that, numerous duet recordings were made...go to YouTube, type in the song's title and enjoy the 1,400 results, including Ella Fitzgerald and Louis Jordan, Hot Lips Page and Pearl Bailey, Margaret Whiting and Johnny Mercer, Jessica Simpson and the guy she divorced, and most disturbingly, one by Martina McBride and a dead Dean Martin (I hate technology).

The song blew up on the charts in May 1949 with dueling versions of Dinah Shore and Buddy Clark vs. the aforementioned Whiting and Mercer rendition. The song continued to be recorded throughout the summer of 1949 with a bunch of different recordings making the charts, but for our intents and purposes, our story starts on August 12, 1949 at The Click in Philadelphia. It's from this nightclub that Armstrong and Velma Middleton's first surviving broadcast of this duet survives. The two were a natural pair when it came to innuendo-filled duets and already had two in the books, "That's My Desire" and "Don't Fence Me In." With "Baby It's Cold Outside" all over the radio, it was a no-brainer to have Louis and Velma put their own spin on it. Unfortunately, it doesn't seem like they rehearsed much; Pops seems to forget some of the words and much of routine is sloppy. Still, as an artifact, it's interesting and it still received from laughs. Give it a listen:


It's good but it's not great. But Armstrong was a genius as working a routine over until it was just right and by January 1951, Armstrong and Middleton were slaying audiences with it. The change? They slowed down the tempo to a crawl, allowing Armstrong to really milk his responses. Timing's everything in comedy and with the new tempo, Armstrong was better able to show off his comedic talents. Also, they had a whole new interlude in the middle, a little comedy sketch complete with pantomime of the two looking out a window at the winter weather. Even Earl Hines got into the act, interrupting Armstrong by claiming he saw Middleton hanging out at (fill-in-the-blank of a local neighborhood close to the theater).

On January 30, 1951, Armstrong and Middleton recorded their duet live before Decca's microphones at a Pasadena "Just Jazz" concert. The resulting album gave the pair a new song to be requested at most shows. In fact, at a North Carolina show in 1954, all Velma had to do was announce the word "Baby" and many in the audience began screaming their approval! The Pasadena version is great though the audience is a little stiff for my taste. Four nights earlier, the All Stars did it in Vancouver and tore the place down. Just listen to the ovation! I mean, it's the kind of performance that would make jazz critics hold their noses, but as pure entertainment, it's hard to beat. Without further ado, enjoy "Baby It's Cold Outside" and a have a great weekend! 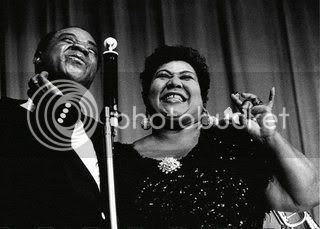 Roger Owen Green said…
I was listening to Coverville, which attributed the song to Satchmo, but I knew about the Ricardo-Esther connection - http://rogerowengreen.blogspot.com/2008/10/m-is-for-montalban.html - so I was looking for verification, and you've provided it. Thanks.
December 19, 2008 at 11:56 AM