Today's "Encounter with Louis" comes from Facebook friend, Frederick C. Wemyss, who originally wrote this piece in 2010 and is gracious enough to allow me to share it here. Did you encounter Louis? Please let me know all about it by e-mailing me at dippermouth@msn.com. Take it, Fred (and stay for the updated ending)!

The year before he died, Louis Armstrong made a surprise appearance at a jazz concert at Walt Whitman High School here in Huntington, New York. I was ten and got to see him. This was 1970.
My mother was a speech teacher at BOCES. A friend of hers who taught at Walt Whitman High told her about a charity event for autistic children. It was going to be a concert featuring Arvell Shaw, a bass player. She gave my mother secret information. Louis Armstrong was going to appear at the end. This was very much on the Q. T.

I was just old enough to remember "Hello, Dolly" as a hit single. My brother Bob and I used to imitate Louis Armstrong's raspy voice whenever the song came on. We loved the song. When my mother told us we might have a chance to see Louis Armstrong we were very happy. We kept imitating "Hello, Dolly" for two days. I was in my school band and played the cornet. I was always listening to the Tijuana Brass, so I related to the trumpet (and, hence, the cornet.)

Twenty-five years later, when I had become a collector of Louis Armstrong music, I learned that Arvell Shaw was the bassist in Louis Armstrong's All-Stars, the small combo which began in the mid-1940s.

I liked the concert, but, child that I was, I was distracted, waiting for a surprise appearance by Louis
Armstrong. If there was an intermission, I'm sure I began thinking he wasn't really going to show. Word was he was ill. Putting it together, I imagine he came in from Corona, Queens, where he lived. This was an hour away and is now the Louis Armstrong House Museum. I imagine most of the audience did expect him. It was not a capacity crowd. It was, if I remember, an afternoon concert. There was a teenager in the audience with a huge scrapbook.

Finally, an announcement was made and suddenly Louis Armstrong came out between two curtains. I can't remember if he had his trumpet with him, but, whether he did or not, I am quite certain he didn't play it. He sang "Hello, Dolly." The audience clapped along. I can't remember if he sang anything else. I feel he only sang that. Then he walked into the audience and sat down next to the kid with the scrapbook. The kid showed him every page in it. It had pictures of Louis Armstrong, newspaper clippings about him, placards and index cards, 8 by 10 glossies and Louis Armstrong signed every picture on every page, talking to his fan in a quiet voice. My brother and I saw this from a few seats away.

"I want to get his autograph," I said.

"I told you not to bother him," my mother said.

"I want his autograph, too," said my brother.

We took our flyers and ran to him.

We watched him sign a few pages of the fan's scrapbook. "Can I have your autograph?" said my brother. Louis Armstrong looked up, quietly took the flyer, wrote a giant signature and handed back the flyer.

I had that flyer, with the giant "L" at the start and the giant "A" for "Armstrong," for twenty years. I moved from one room in my house to another and, somehow, couldn't find the flyer when I'd finished moving. I used to open it up and look at it. It was next to the mute for my cornet, an instrument I abandoned at the age of thirteen.

The Christmas after he died, a 45 of his reading of THE NIGHT BEFORE CHRISTMAS appeared at our supermarket. My mother bought it. Each Christmas Eve since then, we play that record. It was one of the last things he ever recorded, There's no music on it, just the voice of Louis Armstrong, giving the poem a charm and drama no one else had ever given it. I wonder if there had been a plan to put music behind it. It's great the way it is.

About ten years ago I dreamed there was a knock at my old bedroom door. It was the room I'd lived in when I still had the autograph. I opened the door and Louis Armstrong was there. He held out his hand and whispered something. I took the flyer from its place next to my mute and handed it to him. He looked at it, folded it up and put it in his shirt pocket. He turned and walked downstairs.

I can hear his autograph, however, on those signature licks waxed during the lifetime of the great jazz pioneer.

************
Now, for the 2014 update, Fred writes, "At the end of the essay, I mention that I lost the autograph. Shortly after I wrote it, I found it, and I'm including a picture of it. (It is now somewhere in my stacks of books, CDs and what have you. I wish I'd taken a picture of the reverse side of the flyer Louis Armstrong signed, which shows that this was at a concert led by Arvell Shaw at Walt Whitman High School in Huntington Station, NY in 1970.)" Here's the pic! 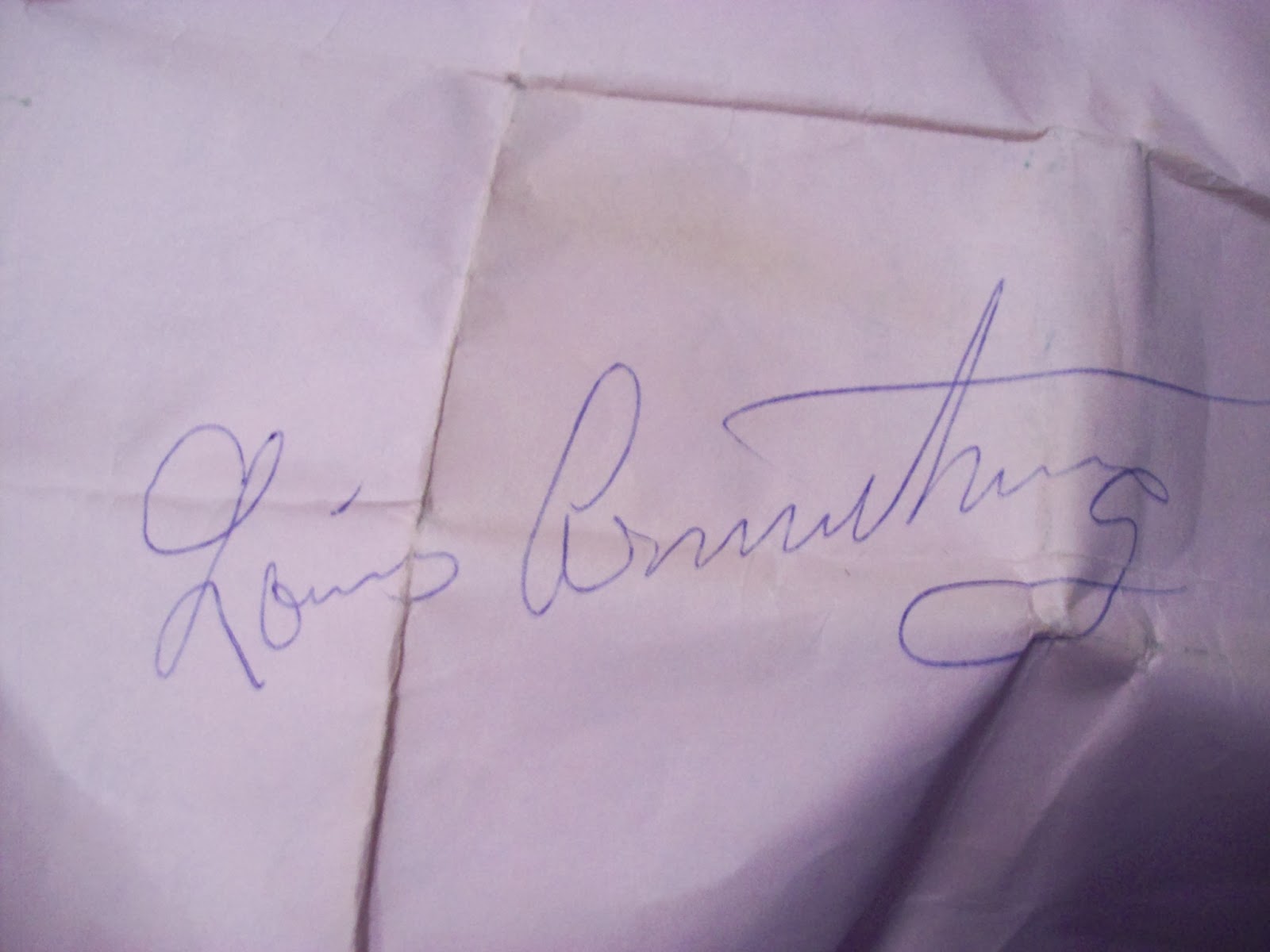 Thanks, Frederick! I hope to have another encounter to share soon, as well as an update on the Mosaic box and some of my usual blatherings about Pops.But one final question....who was the kid with the scrapbook and where is he--and the scrapbook--now!?!?