Dear friends, I have big things on the blog burner for the upcoming weeks. I've hinted at a massive Armstrong boxed set in the works and I'll have some details about that. Also, more or more people write to me saying that they're digging my book, but wish they could hear the music I discuss in it. This might take a while, but I'm going to start uploading stuff chapter-by-chapter so you can listen along as you read to some stuff you probably won't hear anywhere else.

But before that, indulge me for just a little longer as I'm about to be let loose on the world in a barrage of publicity in the next few weeks. If you're here (and if you've been with me from the beginning), you probably don't need to see or hear me run my mouth on dear old Pops, but if you're into that sort of thing, some recent things I've done have begun popping up on the web. The great Leonard Lopate engaged me in some fun debate about Louis's later years, if you'd like to listen along. Last week, I had a 20-minute phone interview with Cyrus Webb all about my history with Louis and the themes of the book, a session that's also available online. And just the other day, I sat down for a really great chat with the legendary Bob Edwards on his satellite radio show. I don't know when it's going to air, but keep checking Bob's site to find it when it's ready, probably sometime this coming week.

After eating up so much time on the radio, it's time for me to make some public appearances as I'm setting out on a little book tour this week. First up, I'll be in Washington D. C. on Tuesday. For those of you near a radio or computer, I'll be live on the
Kojo Nnamdi Show for a full hour (!) at 1 p.m., which should be a blast. Then, at 7 p.m. that same evening, I'll be at Politics and Prose in Washington D. C. on Tuesday night, which I'm really looking forward to (and they will offer autographed copies of the book if you request them). After a TV appearance in Baltimore on Wednesday morning, it's off to Atlanta for a full-blown lecture for the Margaret Mitchell House. You can purchase tickets in advance to that event, which will find me dipping into my bag of video tricks to bring Pops down Georgia way. And speaking of my endless supply of Louis videos, I'll back at the Satchmo Summerfest for the fourth consecutive year in August, always a highlight of my year.

If you can't get out to D. C. or Atlanta or New Orleans and you still have a strange desire to see me talk about Pops, thank my friend Michael Steinman for bringing his camera to my book party at the Louis Armstrong House Museum on June 26. I already mentioned that it was one of the great days of my life, meeting so many wonderful people and spending time many friends and family members. But in the middle, I took to the podium for a 30-minute mini-presentation, armed with my trusty Ipod, a few choice videos and a short reading from the book. Michael captured the whole thing, which you can watch by clicking here.

And though the video is great, I'd like to close this entirely too Ricky-centric post with a photo that's worth a thousand words to me. It's a gathering of the gang at the end of the book party and it's pretty much my entire life in one picture. From left to right: Uncle John Jackmore, Aunt Pat Jackmore, Louis Armstrong's neighbor Selma Heraldo, my nephews Tyler and Connor Mees, my mother Marilyn, my father Dan, me, my wife Margaret, my brother Jeff, my sister Michele, her boyfriend Ray, Louis Armstrong House Museum Director Michael Cogswell, my mother-in-law Ann holding my two-year-old daughter Ella, my brother-in-law Mike and his wife Stacy, my old friend from high school (and former bassist), Jon Kahnt, my mentor, the great jazz historian Lewis Porter and another old friend from high school, Mark Ipri. Oh, and Louis at left, enjoying the party. What a day! 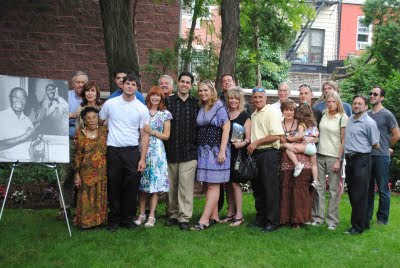 Have a great weekend and I'll be back with more on Wednesday, the four-year anniversary of this blog (and if you thought when I started this blog four years ago, I'd be spending an anniversary on a book tour, well, you'd be nuts). Til then!