I've Got My Love To Keep Me Warm

The snow is snowing
The wind is blowing
But I can weather the storm.
What do I care how much it may storm?
I've got my love to keep me warm.

You can't blame me for having those lyrics rolling around my head for the last day or so as my sleepy community of Toms River, NJ has been pelted with two feet of snow. No exaggeration. Two feet. We even made the CBS news the morning which, out all of the cities and towns in the Garden State, picked Toms River for a photographic representation of the havoc of this storm. Need proof? Here's the parking lot of my development, the family car on the left, my car on the right: 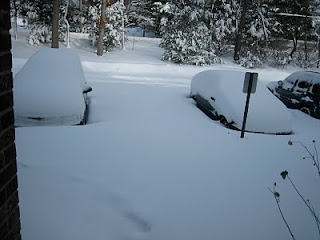 And here's a view of our back porch: 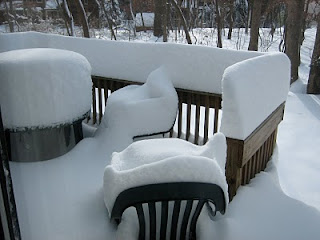 (The small pillar to the left used to be a table.)

Thus, in the middle of a weekend of cabin fever with the wife and baby (endless viewings of Dora the Explorer), Irving Berlin's lyrics to "I've Got My Love To Keep Me Warm" shot into my mind. It was definitely apropos; the snow was indeed snowing, I honestly could not remember a worse December and between duel combinations of Margaret and Ella and Louis and Ella, I had plenty of love to keep me warm and sane. So let's go back to Los Angeles in August of 1957 (not exactly a wintery) scene and listen to the magic conjured up by the unbeatable team of Louis Armstrong and Ella Fitzgerald, with swinging backing back Oscar Peterson, Herb Ellis, Ray Brown and Louis Bellson.


Now if that doesn't heat things up, I don't know what will. There's no trumpet playing (Armstrong's lip was going through a tough time and he didn't pick up the horn once on that August 13 date) but the sound of two of the greatest voices in jazz history more than makes up for its absence. Speaking of those voices, my eight-month-old baby daughter could tell you that they are quite different. On all their pairings, Ella and Louis usually found common ground when it came to keys but "I've Got My Love To Keep Me Warm" is a pretty wide-ranging outing, resulting in some quick switches. The song begins in Bb, with Pops reaching way down low to hit some of those notes. For his chorus in the sun, the group modulates up to C, but then back to Bb for Ella's reentrance. The piece stays in Bb until the end with Pops having no trouble with the bridge in that key and coming up with some nice harmonies in the final A section. The rhythm section is hot enough to melt all the snow in Jersey. Not exactly a historic performance but it's still incredibly enjoyable.

That's all for me. I hope to be back on Tuesday with my third annual "Very Satchmo Christmas" posting. I hope to have left the house by that point but you never know. My wife, a schoolteacher, has already had her high school closed for Monday. As for me, the Armstrong Archives will be wide open but my 2 1/2 hour commute could easily turn into 4 so don't be surprised if I take a one-day hiatus from the dream job. Thus, another day off with the wife and baby will insure plenty of love to keep all of us warm.

Now if only that love could dig out my car...