As usual, I'm armed with apologies and excuses for my latest absence from the blogging scene. I wish I would say that I've been furiously working on my manuscript and finally came up for air, but that would be a lie. Life has been crazy lately, in a good way, with frequent gigs, a studio session for a friend, doctor's appointments for my wife (three months in and the baby is healthy!), family functions, you name it (and for those I've e-mailed personally, you probably noticed that my e-mail was hacked on Saturday...sorry for the spam!).

Anyway, when I'm walking around with my Ipod, I've been charting the differences between Armstrong's various "Royal Garden Blues" performances and I hope to have something coherent about it to post by the end of the week, complete with pictures, video footage and more audio clips than you can shake a stick at. But since I literally have five minutes to write this before I go to work, I decided to share something that many Armstrong nuts might not be familiar with as it's kind of buried on Itunes.

There's a disc titled "The Liberty of Jazz" that features some heavy hitters (Art Farmer, Zoot Sims, Phil Woods, Bob Brookmeyer) playing "Soviet jazz compositions over Radio Liberty." I've never actually seen it as a physically C.D., but it is available to download on Itunes and Amazon. Armstrong's name was on the album cover so I quickly spent the 89 cents to download "Five Minutes, trumpet solo - L. Armstrong." 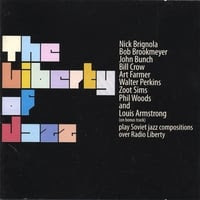 I've done a little bit of digging and this is all I can find. The song, "Five Minutes," was from a very popular Russian movie, "Carnival Night" and is from the year 1958. I did a further Google search and found this excerpt from a Gene Sosin book, "Sparks of Liberty": "Before the Radio Liberty transmitters in Spain began operating in the early 1960s, the relative weakness of our signal and the strength of the Soviet jammers had inhibited the use of music on the air (...) One memorial exception in the 1950s was the appearance in our New York studio of Louis Armstrong, who announced in his gravel voice – in carefully rehearsed Russian – that he was speaking over Radio Liberty. Then he put his trumpet to his lips and played a popular Soviet tune called “Five Minutes” from a film hit, “Carnival Night."

Thus, from that excerpt, Sosin seems sure it's from the 1950s. It's possible that the record was a hit in 1958 and Radio Liberty asked Louis to contribute something to it that year. Regardless, Armstrong clearly loves it. Much like "Luna" on the private recordings portion of the Fleischmann's Yeast set, it's an example of Pops playing along with a foreign song that is clearly not jazz...yet he makes beautiful music throughout. His chops are in prime 1958/1959 shape, nailing that high C towards the end. In the middle, it sounds like he's ready to end it so perhaps he hadn't listened to it many times. But he pauses for a few seconds, regroups, and wails til the closing. Again, this was pretty unknown to me so hopefully it'll be new and exciting for you. Enjoy!