"Heart Full of Rhythm" - An Update

The hardcover edition of my new book, Heart Full of Rhythm: The Big Band Years of Louis Armstrong, is still due to be delivered on September 1, but I'm thrilled to announce the it is available as an ebook NOW! This even caught me by surprise, but I happy it's out there. Personally, I'm a purist and don't believe I've ever purchased an ebook, but I know it's how a lot of folks read in the 21st century so if that floats your boat, pick it up on Kindle or Apple Books or wherever digital books are sold. 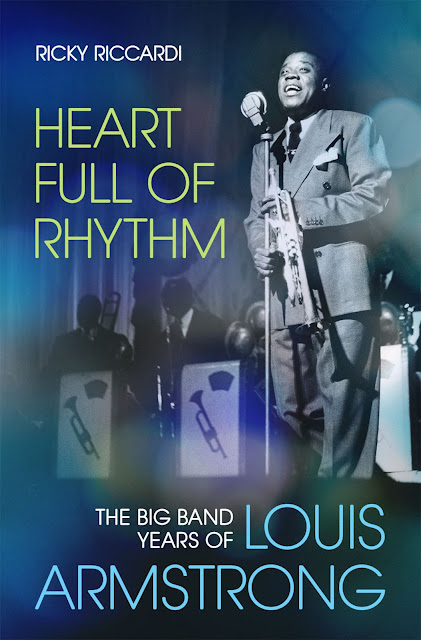 Since my last update in July, Michael Steinman came through with the review to end all reviews on his "Jazz Lives" blog. Read it here--thank you, Michael!
And hot off the presses, Eugene Holley Jr. wrote about the book and interviewed me about my Armstrong work for Publisher's Weekly. Check it out here--thank you, Eugene!
Finally, this past weekend would have been Satchmo Summerfest, always the highlight of my year since my first trip in 2008. Alas, the festival was canceled because of Covid, but the dedicated crew there still put together an excellent virtual series of programs titled "Seven Days of Satch." I appeared on WWOZ with Sally Young to talk about the book, the Armstrong House "That's My Home" site and the upcoming Mosaic set (which don't worry, will get its own update soon!). It's still on the WWOZ 14-day archive through August 13 so if you're reading this in that window, head here to listen.
Over the weekend, the virtual Festival provided lots of fantastic music by some of my favorite New Orleans musicians; all of it can be watched on the French Quarter Festivals YouTube channel. I was asked to film two fresh presentations, doing one that combined a look at "That's My Home" and a tour of the Armstrong House and Archives, but to stay on topic for today's theme, I also took part in a wonderful conversation about the book with one of my favorite people on the planet, Maxine Gordon. Maxine's Sophisticated Giant is a superlative biography of her husband Dexter Gordon and we thought it would be a lot of fun to talk biographer to biographer. Here's the results:
I think that's the latest but I'd like to say I'm almost overwhelmed by the interest in this book and sincerely hopes it lives up to expectations. I've been doing more interviews for radio, podcasts and other media formats but those are all going to post around the September 1 release date so I'll be back with another update then. And at that point, once the book is out, I'll do what I did back in 2011 and provide soundtracks for each chapter, thanks to Spotify and Apple Music playlists. Lots to look forward to--stay tuned and thanks for your support!