One year ago, I warned my Facebook followers that if they loved Louis Armstrong, they should start saving their money. I'd like to think I made good on that promise:

*The end of December 2016 saw the digital release of The Decca Singles 1949-1958, the first time Louis's "pop" sides for Decca were ever issued in complete form.

*Soon after came another Universal-produced digital release, Louis: Expanded Edition, a reissue of Armstrong's Mercury recordings, including all the surviving session takes, alternates, rehearsals and breakdowns.

*April saw the launch of "The Louis Armstrong Legacy Series" on Dot Time Records, kicking off with The Standard Oil Sessions, a choice 1950 recording with Armstrong, Hines and Teagarden. November 2 saw the release of volume 2, The Nightclubs, a compilation from five different 1950-1958 broadcasts featuring five different editions of the All Stars. I'm happy to report the Collector's Edition, with my expanded liner notes, will be mailed out on December 9 to those who have subscribed to the series. (Two more volumes to come in 2018 so subscribe to the whole series now!)

*In August, Universal was back at it with The Decca Singles 1935-1946, the first-ever digital release of these glorious 1930s and 1940s Decca recordings, pitched corrected and released in the correct key for the first time (thanks to Armstrong nut Phil Person!)

That's a lot of Pops for a single year--and there's more to come in 2018! I'm happy to report that Louis Armstrong's Verve recordings, both by himself and with Ella Fitzgerald, will be reissued on a pair of 4-CD boxed sets from Universal in January and February of next year! I'll have more on the Ella and Louis set soon, but right now, I want to talk about, Pops is Tops: The Verve Studio Albums. 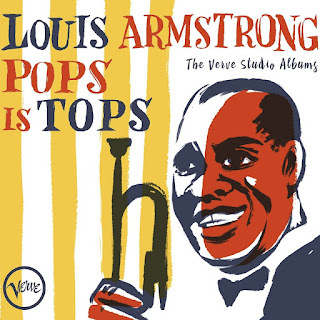 Like everything above, except the Dot Time releases, it is co-produced by myself and Harry Weinger--all Armstrong fans should tip their cap in Harry's direction for loving Louis so much and wanting to issue so much material this year alone. (And my personal gratitude is obvious as I'm just thrilled to be along for the ride!)

As usual, for my remaining blog readers, I'd like to share the backstory and details of this set. Having already tackled the Ella and Louis recordings (now due out in February), Harry and I decided to set our sights on Louis's other three solo Verve albums, I've Got the World on a String, Louis Under the Stars and Louis Armstrong Meets Oscar Peterson. Like the Ella and Louis material, Harry and I realized that many Armstrong fans had this material, especially the late 1990s Verve reissues. World on a String and Louis Under the Stars were issued jam-packed with alternates, rehearsals and breakdowns on a 2-CD in 1999.

What to do? Well, you're paying attention to the state of jazz reissues in 2017, there's one trend that is proving to be quite hip and popular: the resurgence of MONO! Stereo was just getting itself together in 1957 when Norman Granz recorded these albums so he recorded each of them in mono and in stereo. All subsequent reissues have been in stereo so we decided that the way to make this set different would be to issue the original mono masters.

In a few cases, Granz even snuck completely different takes onto the mono releases. In those cases, we've retained the stereo masters as "bonus tracks." We've also retained all the bonus tracks from the 1999 reissue but we've re-sequenced them because it was a pain in the neck to listen to it on the 1999 release, with the beginnings of certain sequences being hidden in the middle of the previous track. All of that has been ironed out. For Meets Oscar Peterson, we also included two complete alternates of "Let's Fall In Love" that were put out on a Verve Elite Edition collector's disc in 1999, in addition to a rehearsal/breakdown of "Blues in the Night."

That took care of the first three discs but Harry and I wanted to tack on another fourth CD bonus disc. I first entered the realm of Universal back in 2011 when I helped put together a limited edition 10-CD box, Satchmo: Ambassador of Jazz. While putting that set together, the tapes turned up for the August 1, 1957 session with Louis and the Oscar Peterson Quartet from the album Ella and Louis Again. This was Louis's one solo session without Ella, containing performances of "Makin' Whoopee," "I Get a Kick Out of You," "Let's Do It (Let's Fall in Love)" and "Willow Weep for Me." On the tapes were all the alternates, breakdowns and discussions for this material, a treasure trove.

Universal realized this and issued it all digitally in 2012 as A Day With Satchmo. But this was in the pre-streaming era when people were really not paying attention to download-only releases. I blogged about it back then but don't know many Armstrong fans who've heard the entire session. Thus, it made complete and total sense to make A Day With Satchmo the bonus disc, the first time the existing August 1, 1957 session tapes have been issued in physical form.

Once again, I have written the liner notes and once again, I can attest that the mono sound of the set is truly warm and quite a revelation (I've always thought the mid-1950s "hi-fi" sound was as good as it gets). Seriously, I've done some A/B comparisons with people at work, and they've been stunned at the results. I first purchased Louis Armstrong Meets Oscar Peterson on a 1997 Verve Masters Edition reissue and loved it immediately. However, I was always aware that there was quite a bit of tape hiss, plus the overall sound was a bit on the treble-y side, which I just chalked up to Norman Granz having an off day in the booth. Turns out he was most likely channeling his energies into the mono mix, which is more balanced and so much warmer. I've heard things on his vocals, such as a moan toward the end of "That Old Feeling" that I never heard in stereo and there's a nice bit of reverb on the vocals and trumpet playing that adds an almost ethereal quality to some of Pops's efforts. Oh, and no tape hiss! I've had the mono mix now for a couple of months and it's the only way I listen to the album. I hope my readers out there agree with my ears! Please permit a photo of me in the studio holding the mono masters of Louis Armstrong Meets Oscar Peterson: 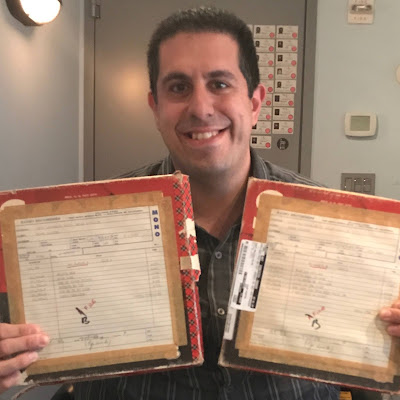 That's the story behind Pops Is Tops: The Complete Verve Studio Albums, which, I should mention, will also be available digitally and for streaming across all the major platforms. If you've supported any or all of these Armstrong-related endeavors in the past 12 months, all I can say is THANK YOU because without people buying this material or downloading this material or posting online about this material, I don't think the companies such as Universal and Dot Time would as enthusiastic and willing as they are to keep doing Pops releases. And again, the complete Ella and Louis comes in February and the next Dot Time release probably in April (and I mentioned in my tribute to George Avakian that I'll be working with Mosaic again next year) so all I can say is....more to come! (And keep saving your money!)

baz said…
No tape hiss on Meets OP is worth the price of admission alone. And mono mixes had been refined, as stereo ones had not (at that point). So yeah, you pretty much remain the boss!
December 2, 2017 at 7:32 PM

baz said…
No hiss on "Meets OP" is worth the price of admission on its own, as Pops' tone is well represented. And mono mixes had been refined to a T by this point (as stereo had not), so this is great - you're the boss, man!
December 2, 2017 at 8:17 PM

Unknown said…
Any plans for vinyl releases of this material, individually or in a nice box?
December 4, 2017 at 7:54 AM

Unknown said…
I just want to buy these sets listed on real CD. But I believe most of them are digital downloads only....true? I have to pass on downloads.
December 5, 2017 at 7:02 PM

FrankFan1 said…
This set is indescribable. The word warm is exactly right. And there is a big difference between normal streaming and the cds. I hope your sets get Grammy nods next year. They deserve them.
April 27, 2018 at 10:05 PM