The Return of the Blog! (And Exciting News!)

This past July, I wrote my annual anniversary blog, celebrating the ninth year of its existence. It's always a proud moment since this blog really opened the door for my entry in the Armstrong-world. I had plenty of unfinished business, including a second part on Louis's June 1926 Hot Five sessions, the continuation of my look at his California sessions of 1930-31 (I had already teased "Sweethearts on Parade") and more Hot Five blogs throughout the year on the sessions from the Fall of 1926. I had been busy plenty of times in the past and surely the number of individual entries had slowed down over the years, but surely, I'd find a way to keep it going. Right?

As it turns out, the answer was a resounding no. I hit publish on the Nine Year Anniversary blog on July 13 and literally did not sign in again into my Blogger account until today, December 18. What have I been up? I think a brief recap is owed, especially since some concerned readers wrote in to make sure my health has been okay! (It has!)

1) The beginning of August was devoted to my ninth trip to Satchmo Summerfest in New Orleans, where I gave three solo presentations, took part in two group presentations and assisted in two (maybe three?) others. Always a highlight of my year, surrounded by some of favorite people on  the planet! 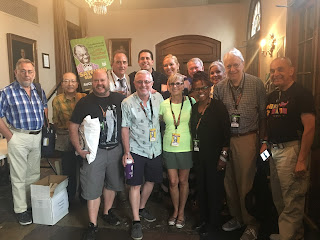 2) Back home, I was honored to get opportunities to write liner notes for musicians not named Louis Armstrong, including the fantastic Chicago-based traditional jazz band, The Fat Babies, and one of my other long-time heroes, Slim Gaillard. Click the links for the finished releases. 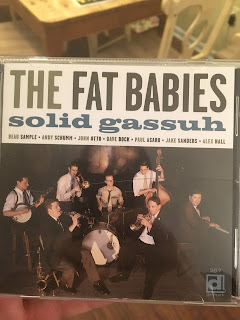 3) At the end of September, I embarked on an incredibly fulfilling experience teaching a six-week course on Louis as part of Jazz at Lincoln Center's Swing University. Attendance was high and the response was great so for Pops-friends in the tri-state area, I'm happy to announce I might be doing it again as soon as this summer! 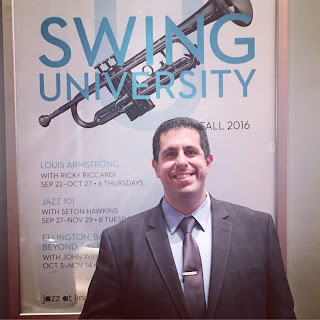 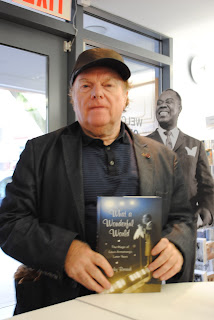 5) Work has been insane, but in a good way. Besides my usual duties as Director of Research Collections, I also curated a new exhibit on Ella and Louis, wrote and edited our newsletter, The Dippermouth News, and kicked off our super exciting digitization project. Earlier this year, Robert F. Smith's Fund II Foundation gave the Louis Armstrong House Museum $3 million to digitize our entire collections. The project began in earnest in November and will be going full speed ahead until the summer. It's just myself and my fantastic Archives Assistant Sarah Rose at the helm of this transformative effort, so that will be taking up most of my time at work for some time to come. But we've already been sharing some of the efforts on our Facebook page. Head over there and "like" us to see treasures like this Jack Bradley photo from the cover shoot for Louis "Country and Western" Armstrong, never-before-published and scanned from the original negative! 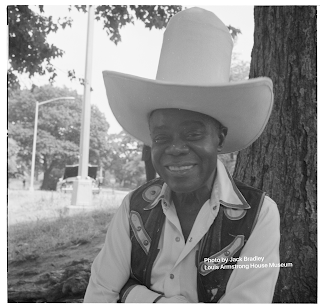 6) Speaking of Facebook, during the fractious election season, I upset a few of my followers who only were "friends" with me for my Armstrong posts and didn't want to hear about my political beliefs. Thus, I started a separate public page, Ricky Riccardi - Louis Armstrong Historian. The blog might have disappeared, but I've been updating that page as much as possible with rare videos from my personal collection, favorite photos I've found on the web and other news about my personal Armstrong-related ventures such as my book, lectures and more.

Now, take all of the above, add in six hours of commuting four days a week plus my wonderful wife and three kids waiting at home and hopefully it will become apparent why the blog was put on hiatus for five months. (Also, why I fell behind on e-mails, Facebook messages, voicemails and even texts. I appreciate everyone who tried contacting me this year and I hope you don't take the silence personally but lots of stuff fell through the cracks, I'm unhappy to report.)

But if you've made it this far, you deserve some news! I'm very happy to announce that the blog will be back in a big way very soon. Here goes:

I have been lucky enough to be the "Louis man" for the good people at Universal Music Group. Fortunately, Louis Armstrong still makes money for Universal so they still come to me for ideas. Back in 2012, when we were putting the finishing touches on Satchmo at Symphony Hall 65th Anniversary: The Complete Performances (still in print!), my co-producer on that set, Harry Weinger, asked for my dream list of potential Armstrong projects. I'm thrilled to report that two such projects will released very soon!

First up, the biggie for me: 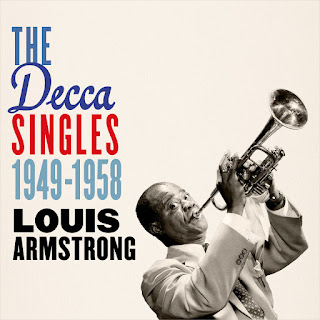 Yes, The Decca Singles 1949-1958. Believe it or not, this material has never been assembled in one package ever before. It's got everything: the hits ("La Vie En Rose," "A Kiss to Build a Dream On," "Blueberry Hill"), the All Stars ("New Orleans Function," "Basin Street Blues"), the duets (Ella Fitzgerald, Velma Middleton, Louis Jordan and both Bing and Gary Crosby), the arrangers (Gordon Jenkins, Sy Oliver, Benny Carter, Jack Pleiss, Tutti Camarata, Sonny Burke), the Christmas songs and so much more. And instead of doing it "Mosaic-style" in strict chronological order, we decided to go in single order, "A" side, followed by "B" side, just as they were originally issued. There are no alternates or unissued material but as bonuses, we've included the tracks from the 10-inch albums New Orleans Days and Jazz Concert, plus, because they're easily available in complete form elsewhere, the edited single masters for "Baby It's Cold Outside," "That's My Desire," "On the Sunny Side of the Street" and "When You're Smiling."

If you've read my book, you know how much I love this material. In fact, in many ways, this can be the soundtrack of my book, alongside the Mosaic Records box of live Pops I co-produced in 2014. And again, the fact that has never been assembled in this fashion ever before is a head-scratcher but I'm proud to have been able to make it happen.

The other upcoming release is the 50th anniversary of Armstrong's one and only Mercury album, Louis. 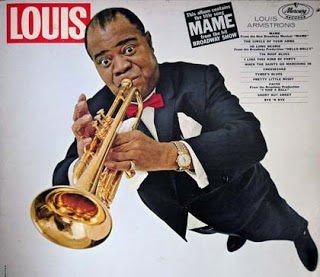 I don't think this is a desert-island disc for anyone but it's still a worthwhile addition to the Armstrong discography, capturing Louis trying to replicate the success of "Hello, Dolly!" with a variety of showtunes and novelty songs (and banjos). Armstrong's chops were in flux in this period, strong as an ox in 1964, struggling a bit but still powerful in 1965 and almost completely out of gas in 1966, but he still sells the subpar material with his enthusiastic singing and engaging showmanship.

The master takes of Louis were never issued properly on CD until included in a Universal 2-CD set, Hello, Louis: The Hit Years. But the new production is extra valuable because all the surviving alternate takes will be issued for the first time! Multiple takes of "So Long Dearie," "Pretty Little Missy," "Faith," "Short But Sweet," "The Circle of Your Arms," "I Like This Kind of Party" and "The Three of Us," over 90 minutes of previously unissued material. There's rehearsal takes, lyric flubs, different trumpet improvisations and other insights into Armstrong at work in the studio.

Now, HERE COMES THE WARNING THAT WILL MAKE SOME OF MY READERS CURSE AND SCREAM. Both of the above will be DIGITAL ONLY releases. Yes, yes, I know. Everyone--including myself--loves a physical product, a CD, liner notes, better sound, etc. But let's face it, it's 2016 and the music landscape is changing. CDs are no longer selling like they used to and digital is becoming the norm. As an Armstrong fan, even if I had nothing to do with these two projects, I still have to be excited that Universal wants to release new Armstrong packages in any format at all! (And I can't give any more information now but I'm helping Universal with THREE more Armstrong releases for 2017--I've already written liner notes for two of them--and all three will be physical CD sets.)

Okay, if you haven't destroyed your computer because of the "digital only" news, let me attempt to salvage it.  Universal asked me to write liner notes for both the Decca and Mercury set and asked that I host them on my blog! I'm so used to working with word counts but anyone who has followed my blog over the years knows that this is not a place for word counts. So I decided to go for it. Since the end of October, almost all of my free time outside of work and my family (including on an eight-day cruise vacation) has been spent on these notes. The Decca notes are done and weigh in at nearly 50,000 words, giving details on each and every single and including a narrative that ties hand-in-hand with that of my book. The Mercury notes are nearly finished, currently at 6,000 words.

Once finished and once both sets go live on the iTunes Store, I will publish the notes in full on the blog and promote the hell out of them on social media. Some of you will already have the Decca material or you might not be big fans of the Mercury recordings. That's fine if you don't want to shell out your hard-earned money on the downloads (though not to guilt you too much, the more these sell, the more Universal will continue to do with Armstrong!), at least you'll be able to access my notes for each for free on the blog. And once they're up for a little bit, I'm planning on breaking up the Decca ones into a series posts focusing on one single at a time, maybe even a daily post for a while (it would be about 45 posts!) at the beginning of 2017.

So that's the story. I'm sorry the blog has remained dormant for so many months but do know that I've still been doing everything in my power to promote dear old Louis. I look forward to announcing the official release of these two digital sets and sharing my liner notes in the next week or two. Watch this space--much more to come!

Anonymous said…
Thanks for all you do, Ricky. These releases will be much appreciated!!

And really looking forward to reading your notes on the Decca release along with your books while listening to the release. 2017 will be a better year!!
December 18, 2016 at 4:35 PM

baz said…
When you're a squirrel, the nuts are more important than what tree you find them under. Just keep telling us where to look!
December 19, 2016 at 9:01 AM