Frank Sinatra was born 100 years ago today. Let that sink in a minute. 100 years. I'm happy it's on a Saturday because if there's ever been a cause for the schools to be closed, it's for his birthday (he's done more for Italian-Americans than Columbus).

Last week, CBS aired a tribute show titled Sinatra 100. I didn't get to see it but just about everyone on my Facebook feed did and the opinion was nearly unanimous. though there were some moments to savor, most of today's pop stars forgot an essential element of Sinatra's music: they forgot to swing. Or many they never knew. As Loren Schoenberg wrote on Facebook, it was clear that today's singers, even if they admire Sinatra, haven't actually studied him and they surely haven't studied where it all came from: Louis Armstrong.

When you think of folks associated with Frank Sinatra, Louis Armstrong might not be the first person you think of. But Sinatra himself admitted, "Early on, my phrasing developed from a combination of musicians and singers that I heard....Louis Armstrong had a great effect on me." There you have it. Sinatra also talked about the influence of Billie Holiday and Bing Crosby on him. Well, Louis had a great effect on them, too. 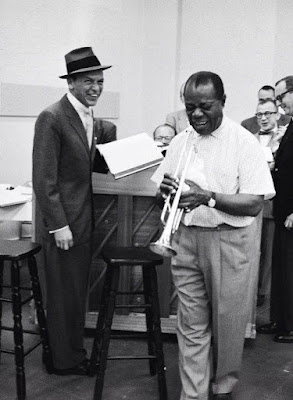 Thus, it wasn't surprising that the guy who stole the show on Sinatra 100 was Tony Bennett, someone quoted as saying, "The bottom line of any country in the world is what did we contribute to the world? We contributed Louis Armstrong."

But I don't want to use Sinatra's centennial to talk about Armstrong's greatness; both men were giants whose independent work will be celebrated for eternity. (I should mention that as the son of two 100% full-blown Italian-American parents, I can say that a love of Frank Sinatra was in my blood from birth. And my iTunes tells me I have over 2,400 Sinatra songs at my fingertips, probably second only to Pops in my library.)

But fortunately for music lovers everywhere, Armstrong and Sinatra did cross paths and I think it's fun to see and hear them in action together. The first time was on a Jubilee radio broadcast from September 1945. Sinatra sang "Blue Skies" with Armstrong contributing a scorching half chorus of trumpet. Here's that recording:


The next time their paths crossed was on Sinatra's CBS television show from New Year's Day 1952. I own this episode on video (courtesy of the great Dave Whitney) and it's a fun one (the Three Stooges are the other guests and they're also heroes of mine....the combination of Sinatra, Armstrong and the Stooges, well, that's the stuff that dreams are made of!). This is one of my favorite solo Armstrong performances of "Confessin'" but it's worth sharing here to see the love Sinatra has for Armstrong, including throwing in a little scatting in the background at one point:


Later in the episode, the two men did combine on an out-and-out duet on "Lonesome Man Blues" and it's a doozy. Sinatra is ghosting at the piano but Armstrong brings out his bluesiest side:

A couple of years later, Armstrong and Sinatra teamed up for a planned animated movie of Finian's Rainbow. The project was eventually abandoned, but before that happened, a lot of the soundtrack was recorded, included Armstrong and Sinatra's scat-filled duet on "Ad-Lib Blues." Sinatra rarely indulged in scatting, but for Pops, he gave it a whirl and sounds pretty good, though Pops outsouls him. Listen for yourself:


Armstrong and Sinatra's next film pairing actually saw the light of day and became quite a hit, though the film, High Society, didn't feature the two men together, instead focusing on Armstrong's more natural rapport with Bing Crosby. But the following year, in 1957, Armstrong, Sinatra and Crosby met up again for a special episode of The Edsel Show. On the show, Armstrong and Sinatra teamed up for this immortal version of "Birth of the Blues"


Armstrong opening trumpet notes always make me curious. He's clearly struggling but I don't think it's chops. Rather, he seems to be finding his way, perhaps trying to figure out the correct key or something. He was familiar with the song as he had already sung it twice on television, with Eddie Fisher in 1954 and with Gordon McRae in 1955. But once Pops finds his footing, he turns in a vintage 1925 obbligato, sticking to the low register for the most part and really playing some funky blues. When Pops enters with his vocal, Sinatra can't hide his joy. Sinatra might have been one of the biggest names in music at the time, if not THE biggest, but on this performance, he looks like he's honored to simply share the stage with Pops, who influenced him and every other singer of his generation. Pops really sells his vocal and wails on the trumpet during the extended ending, sounding positively angry in some of his phrases. Dig how Armstrong gets so into it, he starts bending his upper torso all the way to his left, doing his impression of a lowercase "r." It's a great televised moment in both men's careers. 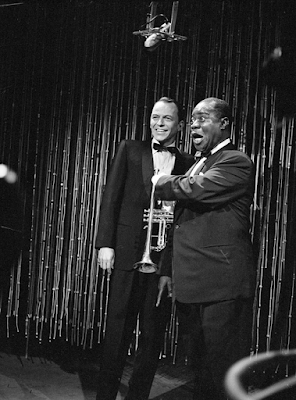 At the end of the show, Armstrong led Sinatra, Crosby and Rosemary Clooney in a too short version of "On the Sunny Side of the Street." Pops's horn is very strong and he demonstrates some of the parade marching that served him so well as a teenager in New Orleans. Notice how his feet move exactly on the beat and he even does that little stooped over bend move that Joe Muranyi dubbed the "Satchmo Strut."

Two years later, in 1959, Armstrong and Sinatra appeared together on the Oldsmobile Show, once again with Bing. Armstrong got a few solo spots and a long medley with Bing but he only appeared in one song with Sinatra and Peggy Lee, the charming "We're Not Young Anymore." Louis sounds a little under-rehearsed but it's still good fun. Sinatra and Lee also showed up at the end of the closing "Now You Has Jazz." Both clips can be viewed here:


According to the discographies, Armstrong and Sinatra never appeared together after that but Sinatra had one final tribute in store for Armstrong. Armstrong's recording of "Hello, Dolly" hit number one on the charts in May 1964. On June 10 of that year, Sinatra recorded his own version of "Dolly" backed by the Count Basie Orchestra with arrangements by Quincy Jones. After singing it straight once, Sinatra sings a second chorus with special lyrics that pay tribute to Satch. Here they are:

For his part, I should mention that Armstrong owned over a dozen Sinatra records and dubbed many o them to tape. He was most definitely a fan. And in 1967, Armstrong returned the compliment in Larry L. King's Harper's profile, "Everybody's Louie," telling King "Frank Sinatra--now there's a man carries a lot of water for his friends. A most accommodating gentleman--if he digs you." All one has to do is listen to Frank Sinatra swing and it becomes immediately clear that he dug Louis Armstrong. Happy 100th Birthday, Francis Albert!

RICHIE said…
I'm glad you included the Hello Dolly recording. I always get a chill when Sinatra belts out "Hello Satch". Such a passionate and sincere tribute.
December 12, 2015 at 10:49 AM

phillyrich said…
Love this post. Have always felt that Louis, Frank and Fred Astaire were the three greatest and most unique musical performers of the 20th century. One-of-a kind, not replaceable. They have no real successors.
December 14, 2016 at 10:13 AM