Has there ever been a more American recording than "Blue Yodel Number 9"? I don't think so.

Think about it: one can discuss the roots and African and European influences of American popular music all day long but what has this country created? Jazz. Country. Blues. Almost anything can be traced to some combination of those three foundations.

And on July 16, 1930, all three met for one single unforgettable recording: "Blue Yodel Number 9 (Standin' on the Corner)." The leader of the session was Jimmie Rodgers, known as "The Singing Brakesman," but more often referred to as "The Father of Country Music." His accompanist? None other than Louis Armstrong, "The Father of Jazz" and the most important musician of the 20th century. And what common ground did these two legends decide to explore? The blues. (Or in Rodgers's case, occasionally the 10-and-a-half bar blues but we'll get to that later.)

Everything surrounding the record is shrouded in mystery. How the heck did it happen? Louis and Lil Armstrong had just moved to California but Louis hadn't made any recordings yet. Though there they were in Victor's studios to back up Rodgers, even though Louis was signed to OKeh. They must have bumped into each other somewhere and Louis must have enjoyed his music and country music in general; how else would the traditional country tune "Faded Love" end up quoted on the bridge of Louis's concluding solo on "On the Sunny Side of the Street" by 1933?

And Rodgers was clearly a fan of Armstrong. For "Blue Yodel Number 9," Rodgers lifted a chunk of the lyrics sung by obscure blues singer Nolan Walsh on his 1926 recording of "The Bridewell Blues." And who was Walsh's accompanist? Yep, none other than Louis Armstrong. Here's the recording if you've never heard it (that's Richard M. Jones on piano):

It's not one of Armstrong's best blues accompaniments--he seems to get stuck a couple of times---and the record surely wasn't a hit but Rodgers knew it well enough to grab a few stanzas. So with the source material in place, here's the original "Blue Yodel Number 9":

Louis and Lil open the proceedings with a short introduction, Louis, muted, opening with a phrase that was one of his favorites to play on the blues (and one that's still a favorite in New Orleans). They set Rodgers up with some countrified changes at a bouncier tempo than Walsh's recording. Rodgers starts right in, singing effectively while Lil pounds away four beats to the bar. Louis is relaxed, filling in the cracks around Rodgers's vocal.

The only difficulty is Rodgers was from the I'll-change-chords-when-I-feel-like-it school of playing and you can hear Louis and Lil listening hard to anticipate his changes. In talking about this record to Irwin Johnson in 1953, Louis didn't hide from discussing the challenge, saying, "And we never did end up on the bar, you know, so I had to get with him. I just made it wrong with him! It turned out fine."

If you'd like to play along, here's the form of the first chorus:

17 1/2 bars for the first chorus. I could keep going but it actually gets tougher to decipher. Lil gets thrown off at 1:06 ("Listen all you rounders...") but gets back on course quickly, Louis covering it up with a searing double-timed passage, one of my favorite moments of the record.

But finally, at the 1:28 mark, Rodgers throws it to Louis and Lil and they take off in their own style. I love this Armstrong solo. He's not shooting the lights out (probably knowing he's not supposed to be on this session) so instead he plays with what sounds like a relaxed urgency, bouncing between an Eb tonic and Gb blue note in every rhythmic combination possible. Lil digs in, too, with a stride-like backing and even a tinkling run in the fourth bar. It's the only real Louis-and-Lil duet we have on record and gives us a glimpse of what they must have sounded like jamming at home in Chicago.

Louis and Lil choose to stick a standard 12-bar blues format, Lil laying some nice changes (I like the C7 she throws in in bar 8) and ending right on the beat. Then Rodgers comes back for one more go-around, singing beautifully, but still changing when the spirit hits him. Louis is on fire after his solo, offering a little more double-time stuff (reminds of Red Allen; or more likely, Red reminds me of Louis!) but Rodgers changes earlier than anticipated, causing Louis to lay out. When Rodgers leaves the window open (after "just for me a suit of clothes"), Louis plays it safe and just moans effectively. Louis mostly stays out of the way and lets Lil guide Rodgers through the last round of yodeling before coming back to put a pretty punctuation mark on the performance.

And that was that. Louis and Lil were done for the day and "Blue Yodel Number 9" was eventually issued on September 11, 1931 with a flip side of "Looking for a New Mama." Rodgers eventually got up to 13 "Blue Yodels" but number 9 remained a favorite, covered by Jerry Garcia among others.

Of course, the presence of Armstrong has turned it into a seminal recording. For years, historians weren't even sure Louis was on "Blue Yodel Number 9" as the 78 label simply said "Jimmie Rodgers Singing with Orchestra" (a nice compliment to Louis and Lil).

Rodgers died of tuberculosis in 1933 so he never seemed to ever talk about it on the record. Louis, however, was happy to discuss it. In 1952, Louis went to New Orleans and ran into Joe Mares Jr., brother of Paul Mares of the New Orleans Rhythm Kings. Mares knew Armstrong was always looking for more records to put on his reel-to-reel tapes so he gave him a batch to record. When Louis was in the right mood, he would sometimes sit by himself and play disc jockey, introducing the records he was about to record to an imaginary audience. When he got to the Rodgers records, Armstrong said, "Folks, this is Louis Armstrong. I'd like to interrupt through here and play a record of Jimmie Rodgers, the yodeler, with orchestra. I made a record with Jimmie, oh, about 20 years ago and I'm still looking for it. [Joe Mares Jr.] gave me this record...and the title is 'Jimmie the Kid,' part of the life of Jimmie Rodgers. And he wrote the numbers. Let's hear this."

Armstrong then dropped the needle and played "Jimmie the Kid." He then played the flip side: "Blue Yodel Number 9"! Armstrong could be heard talking excitedly (but unintelligibly) in the background. Upon the record's conclusion, he picked up the microphone and exclaimed, "Well, well, well, can you beat that!? I was just talking about how I was looking for this record and it happened to be on the other side and the title is 'Blue Yodel Number 9 (Standing on the Corner, Jimmie Rodgers, yodeler with guitar, strings and bass.' And the trumpet must be a surprise because I was looking for this record. Now, that knocked me out....ump ump ump."

Louis added the record to his collection and later picked up the LP, My Rough and Rowdy Ways. In 1962, the Jimmie Rodgers Society sent Louis a tape of "Blue Yodel Number 9" along with a letter saying they found the original recording ledger with a note "Lillian on piano." They wanted to confirm that it was indeed Miss Lil on piano. Here's the tape box: 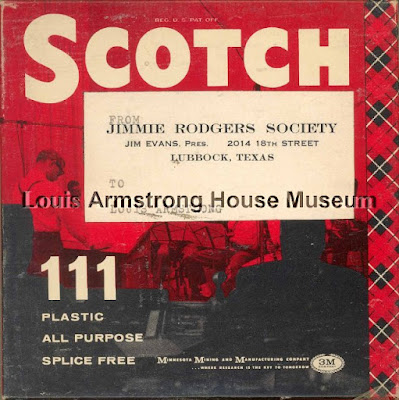 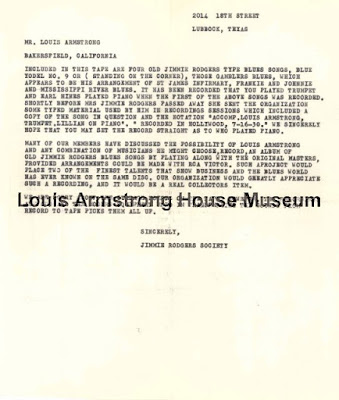 Louis, of course, was not done with country music. In the 1950s, long before Ray Charles put his modern spin on country and western, Louis recorded swinging takes on Your Cheatin' Heart and "Cold Cold Heart." And his final album would be the still fairly unknown Louis "Country & Western" Armstrong. The first time I played this album, I was expecting to hate it because it usually gets knocked whenever it gets mentioned but it actually has a lot of fun moments, even if it's not a Satch Plays Fats. The opening "Miller's Cave" literally features a laugh-out-loud moment at the end when Armstrong's echoing voice shouts a bunch of nonsensical jokes as if he's yelling from inside a cave ("Mr. Miller was a killer diller!"). The same thing happens on "Almost Persuaded," where Armstrong once again has to improvise over a closing vamp. What he comes up with is a gas: "Oh, I tell ya, those strange chops! Oh, I'd love to kiss them strange chops! Oh, they knock me out...crumb crushers! Oh, come here baby and buss me one!" Fun stuff.

To promote the release of the album in October 1970, Louis appeared on The Johnny Cash Show. On one of his reel-to-reel tapes, he strung together his 1970 recordings of "Crystal Chandeliers" and "Ramblin' Rose" and then added the original 1930 "Blue Yodel Number 9." He put these three tracks together to rehearse for his TV appearance on the Cash show, listening to them to get a sense of the lyrics and routines.

When Armstrong made the country and western album, doctors still wouldn't let him play the trumpet but that had changed by the time of the Cash show. This would be Louis's first major TV appearance since he got the okay to play again and he was ready. After doing a medley of "Crystal Chandeliers" and "Ramblin' Rose," Cash and Armstrong tell the story of the original recording of "Blue Yodel Number 9." After promising "to give it to them in black and white," this is what happened next:
Wow. I had read about that performance for years but it wasn't I ordered a bootleg VHS tape of it about ten years ago that I saw it and had my mind melted. Unlike Rodgers, Cash and pianist Bill Walker stick within the eight-bar blues structure without a problem but they're secondary players to the main event: Armstrong's trumpet playing. This was another one of those moments that when I first popped in the tape, I did not know what to expect. Even after watching it a hundred times, I still don't know how to explain it. Pops sounds INCREDIBLE...he plays as if it's 1924 all over again. Remember, Velma Middleton died in 1960 and Armstrong rarely played on Jewel Brown's features so it had been some time since he played a pure blues obbligato (I think you'd have to go back to the "Autobiography" sessions with Velma) but he demonstrates on the Cash clip that he hadn't lost his knack for accompaniment. And that trumpet solo - it's terrific! His tone is so pretty and golden and he has perfect command of the entire horn. And except for the scatting on the yodeling excursions, Pops plays for almost the entire four minutes, never running out of ideas or out of steam. It's one of most triumphant moments of Armstrong's later years.

Unknown said…
I suspect more can be said about the Cash appearance. Being a Cash fan (also), I had my mind blown years ago simply discovering that these two titans had shared a stage. It was the Alpha and Omega of my world. You're right, Pops did an excellent - even perfect - accompaniment, but I think there was a spark there. Cash treated him very respectfully, and the crowd gave him a standing ovation.