It's been almost three weeks since my last entry and in that time, the news about the new Mosaic Records Louis Armstrong Columbia and RCA Victor Live Recordings of Louis Armstrong and the All Stars continues rolling along so how about a little round-up? If you roll your eyes, don't worry, next week is the SEVENTH anniversary of this blog plus the 60th anniversary of Louis's greatest album so I hope to have an entirely non-Mosaic-related post about that in the coming days.

But for now let's stick with the Mosaic. For a real in-depth exploration of the box, Thomas Cunniffe produced a 3,500 word piece for his Jazz History Online website, with some nice disc-by-disc analysis. Shorter reviews have also appeared from Bret Saunders in the Denver Post, Jeff Simon in the Buffalo News and most recently, Colin Fleming in the Boston Globe.

Over at Downbeat, the eminent critic John McDonough was kind enough to lay 4 1/2 stars on the set. Unfortunately, the review is not on the Downbeat website, but here is a shot I captured from the online PDF. Click on it to read it a little clearer: 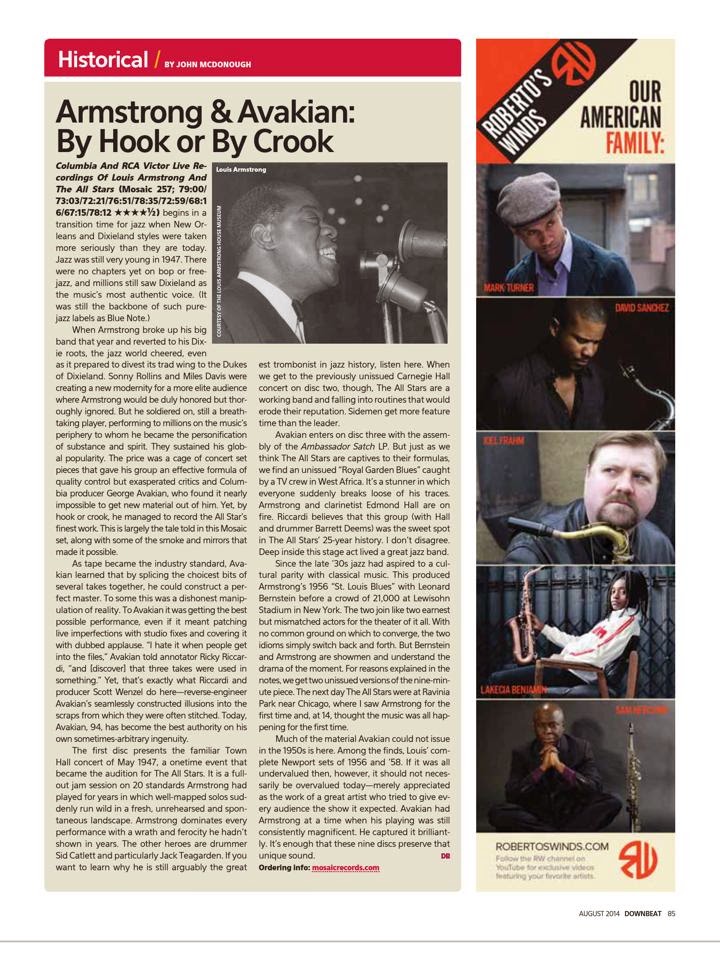 And finally, it was a pleasure to receive a rave review from Marc Myers of the great blog, Jazzwax. However, Marc also wrote me personally with a valid complaint and I wanted to respond with a public apology here on the blog. There was originally a great rush to attempt to put the Mosaic set out last fall. Feeling the pressure, I wrote 32,000 words of liner notes in a week. I knew I wanted to include one of George Avakian's favorite stories, about the time a magazine editor decried George's use of splicing on a Dave Brubeck album, George told the editor to contact Dave and Brubeck simply responded, "George saved my ass."

George has told me that story at least three times, including during our first interview for my book in 2007, as well as in public at the Satchmo Summerfest. However, needing to finish the liner notes in a hurry, I Googled the punchline "George saved my ass" to see if I could find the story online instead of taking the time to transcribe it from my cassette. When I did that, there was the story in a Google Books search result from Myers's critically-acclaimed book, Why Jazz Happened. I grabbed one line since it seemed to echo what George had told me repeatedly: "He asked, 'How can you do that--you're altering the artistry of the musician, and you're putting out a recording of something he didn't actually play?'" That line made the final draft of the Mosaic notes....but without attribution to Marc's work. As someone whose Armstrong research has gotten "borrowed" without proper attribution many times in the past, I can attest to how frustrating that can feel, so let me apologize to Marc again for not giving him the proper credit for that Avakian line. Now stop reading this and grab his book!

Moving on from reviews to the realm of live events, if you live in New York or New Orleans, you have two opportunities in the next month to see me and Scott Wenzel gab about the Mosaic set in person! On Tuesday, July 15, Scott and I will be hosting a Listening Party for the box at Jazz at Lincoln Center in New York. That event will be from 7-8:30 and is free to the public. (And speaking of New York, a reminder that the Mosaic set is currently available in the gift shop of the Louis Armstrong House Museum....with the liner notes booklet signed by yours truly!) Then on July 31, Scott and I will be delivering the Keynote Conversation at the 14th annual Satchmo Summerfest. We'll be recapping the entire saga of putting this set together, in grisly detail.

I'll be back in a few weeks with a personal preview of the Satchmo Summerfest as I'm currently involved in SEVEN different seminars! But it has been a joy reading all the positive feedback for this Mosaic set. Please, if you have stories, opinions, photos or anything else to share about your experience with it, let me know! And I'll be back next weekend with a personal tribute to Louis Armstrong Plays W.C. Handy.