Latest on the Mosaic Set (and a visit with George Avakian)

It's been just about two-and-a-half weeks since I finally held the new Mosaic Records Columbia and RCA Victor Live Recordings of Louis Armstrong and the All Stars 9-CD box and as I wrote in my last entry, I expected to take a brief hiatus from the blogging life because I was simply exhausted from all that went into putting that set together.

But what I didn't fully expect was an absolute outpouring of beautiful comments from friends around the world, each of whom has received the set and is seemingly enjoying the hell out of it. That has made the whole experience so, so worthwhile. Thanks to all who have written in and especially those who have shared pictures of their sets. Here's a few of my favorites!

German drummer Bernard Flegar befriended Barrett Deems and is right up there with yours truly when it comes to loving the All Stars. I was thrilled when Bernard sent me this one: 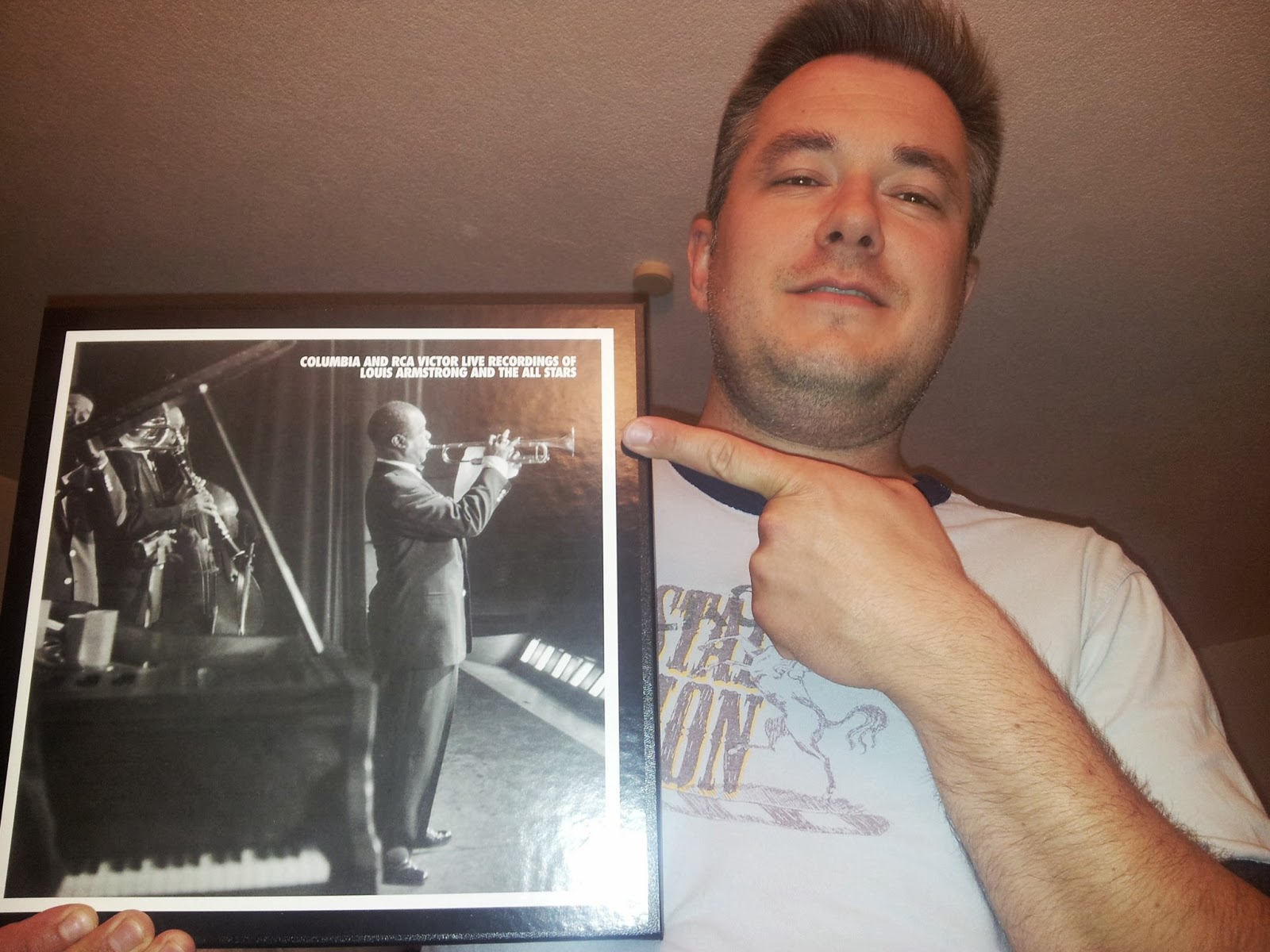 Randy Bright is a friend and graphic artist who has donated some of his great works on Pops to the Louis Armstrong House Museum. Randy almost cleared out our gift shop last time he visited the House and had been looking forward to this one for quite some time. Yeah, Randy! 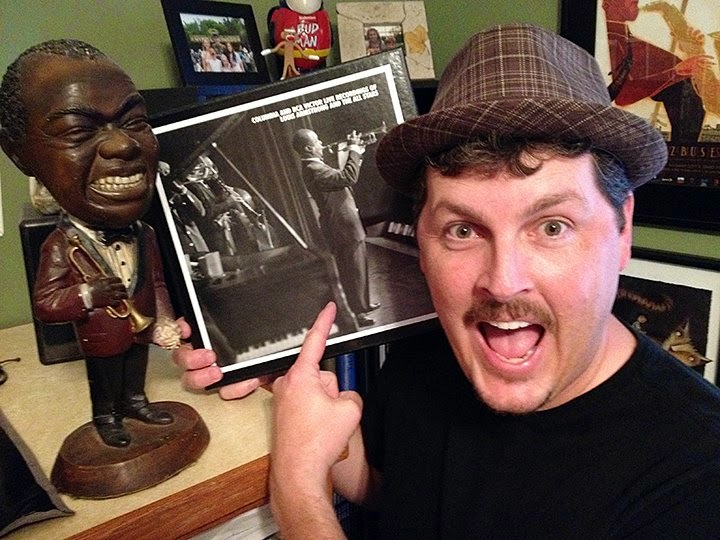 I have over 40 Mosaic sets, as I've been collecting them since high school. Some of the best ones have featured essential liner notes by Loren Schoenberg. This might just look like a simple pic of a Mosaic set....but it's Loren's copy, and I'm thrilled he shared it (and called it "a classic"!). 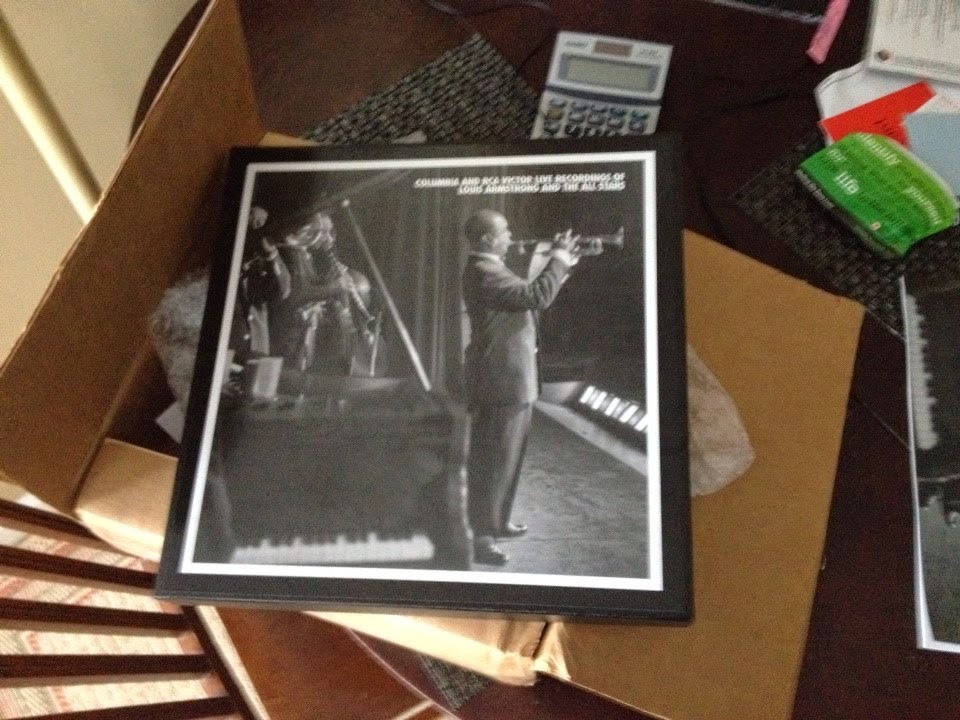 Berklee professor, violinist and professional Pops nut Matt Glaser and I have teamed up for two NPR interviews in the past two years, but we still haven't met! Matt was so eloquent in describing Louis's epic contributions to the world back in Ken Burns's jazz documentary, so again, it was a joy to see Matt lurking behind his copy of the set. 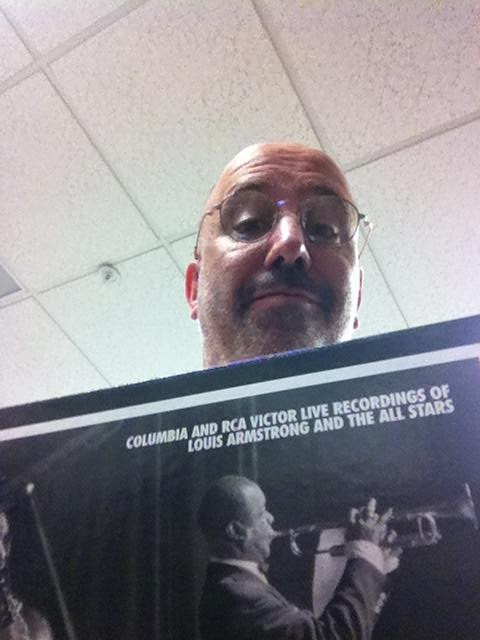 But by the topper was by my close friend, David Ostwald. Anytime I need to crash in New York, I stay in David's apartment, in a room christened "The Riccardi Room" and decorated with photos of myself (it's a long, but funny story). So here's David with the set in said room: 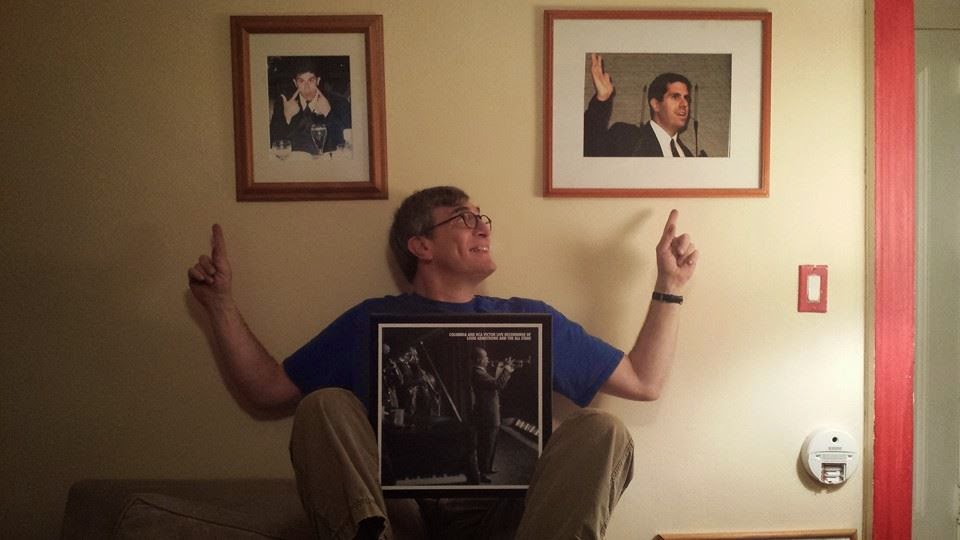 Others have not only sent their congratulations, but they've also sent in their set numbers, which I've seen as low as #48 and as high as #967! Remember, this is a limited edition of only 5,000 and to see Mosaic pushing the 1,000 mark not only three weeks in must be a good sign. Reviews have also been trickling in, all of a positive nature. Last time, I shared Tom Nolan's rave in the Wall Street Journal; he's since been joined by Eric Alterman in The Nation and George W. Harris of Jazzweekly, while John McDonough told me he has a review slated to be published in the next issue of Downbeat.

And in other exciting news, as of yesterday, the Mosaic set is now for sale at the Louis Armstrong House Museum gift shop in Corona, Queens! Mosaic is famous for being mail-order-only but they're allowing the Armstrong House to sell it in-house only, which we're grateful for. Thus, if you're in the NY area, want to see Pops's House and pick up the set, come on out to 34-56 107th Street. Here's a picture of it standing proudly in the shop: 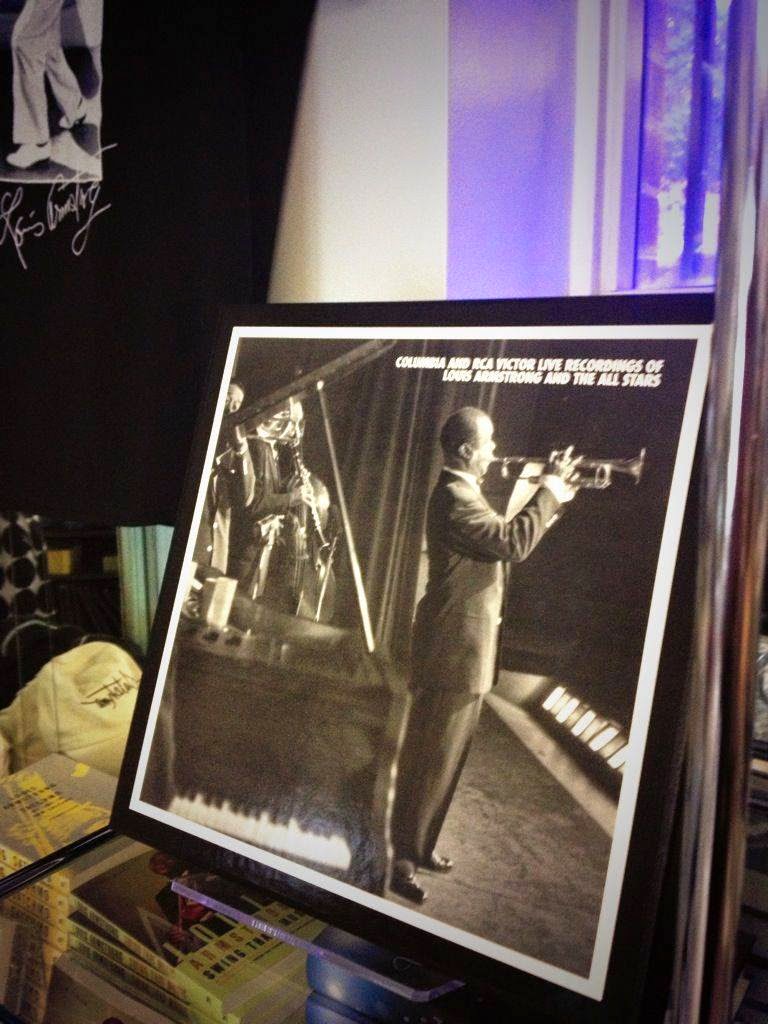 But by far--there'll never be a second place--the highlight of this whole experience came on June 4 when David Ostwald and I visited the legendary George Avakian. I've written time and again on this blog about the importance of George in my life and Scott Wenzel and I specifically dedicated this set to him. When David and I got there, the box had just arrived earlier that day and George hadn't really looked at it. We spent two hours with the 95-year-old legend and he was so impressed with the set and touched by the whole thing. Here's a few pictures we snapped of an evening I'll never forget: 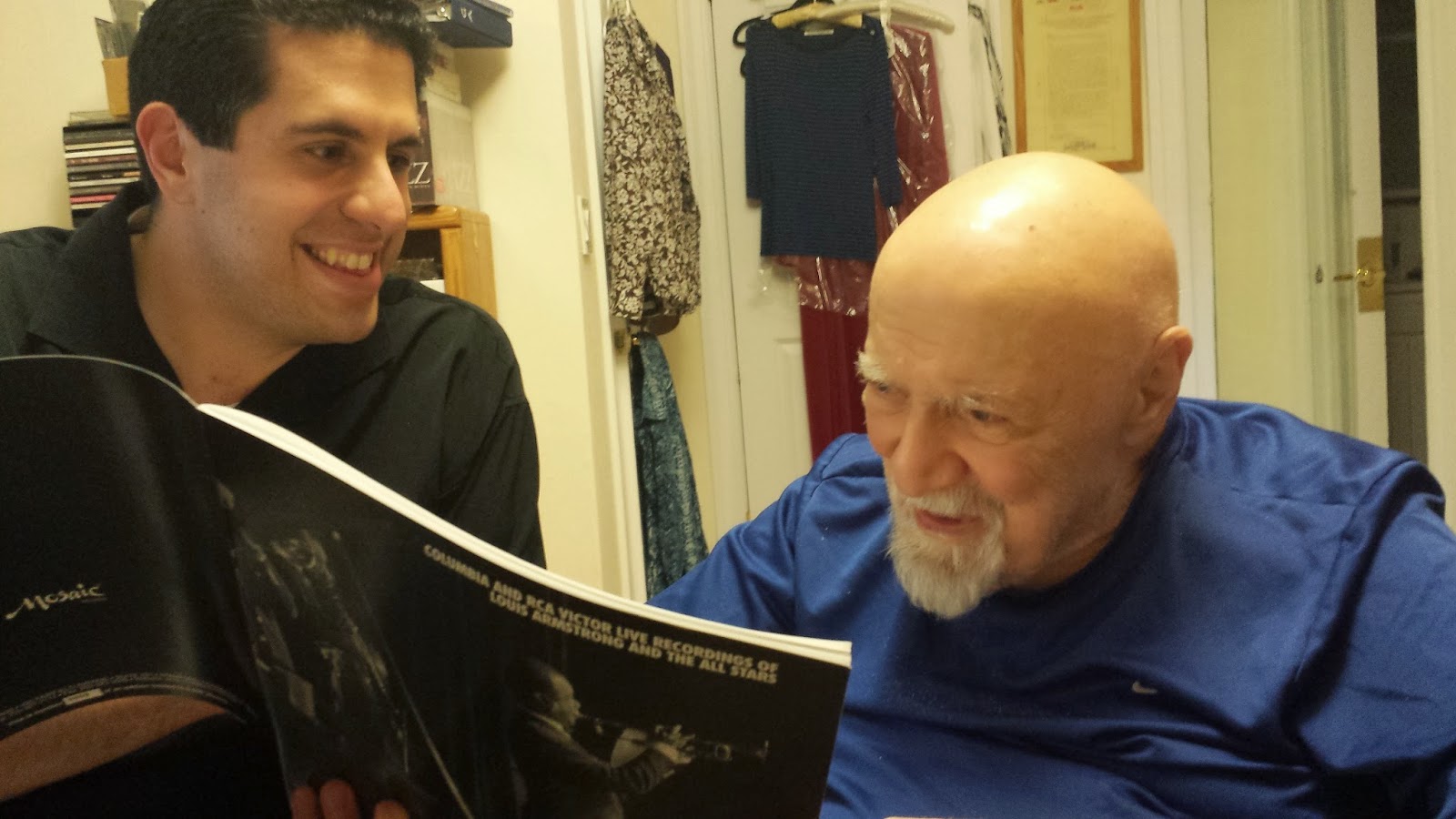 We looked at the booklet, played examples from the set and just plain talked Pops. When it was time to leave, I asked George to inscribe my booklet: 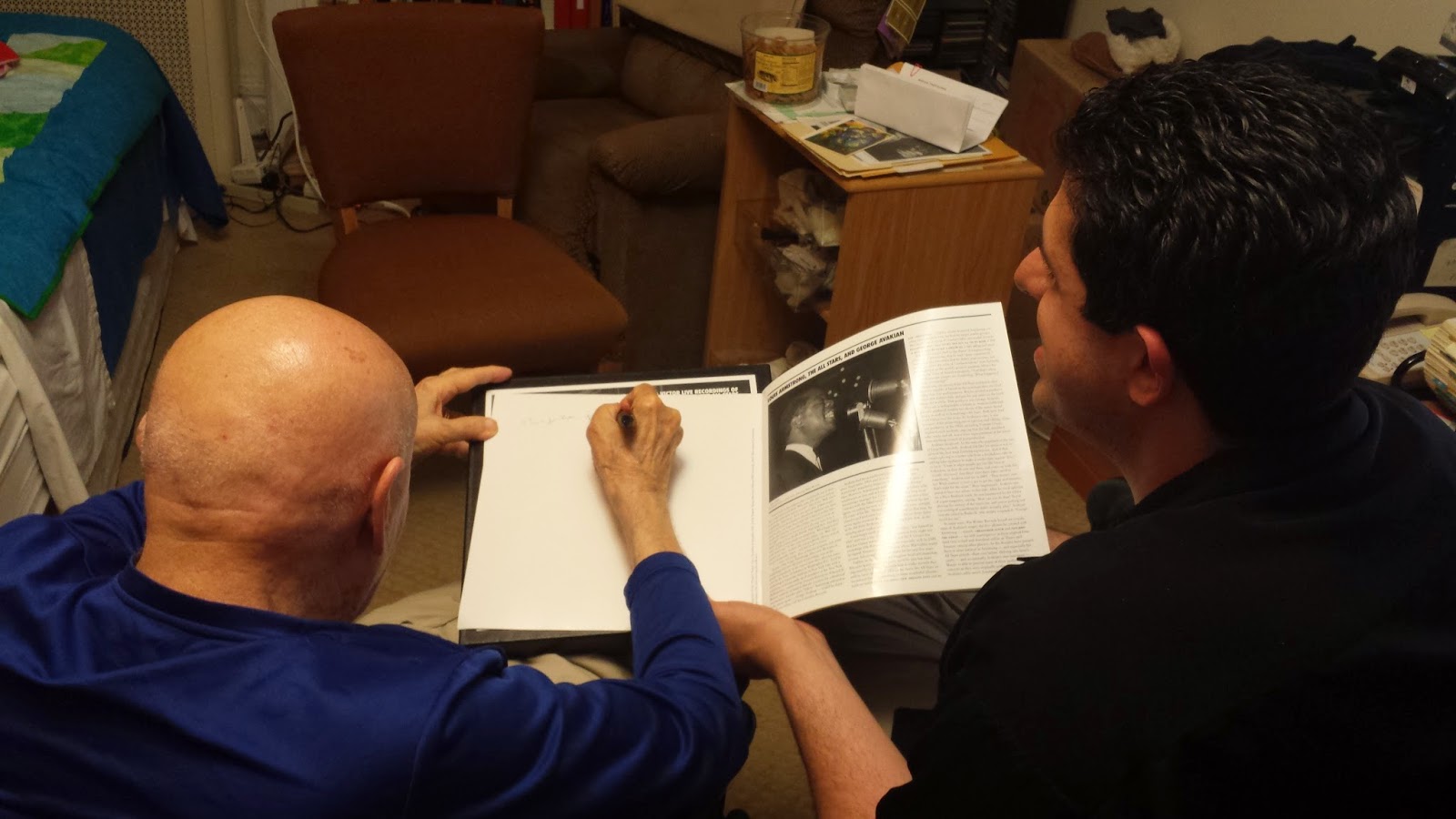 Here's what he wrote: 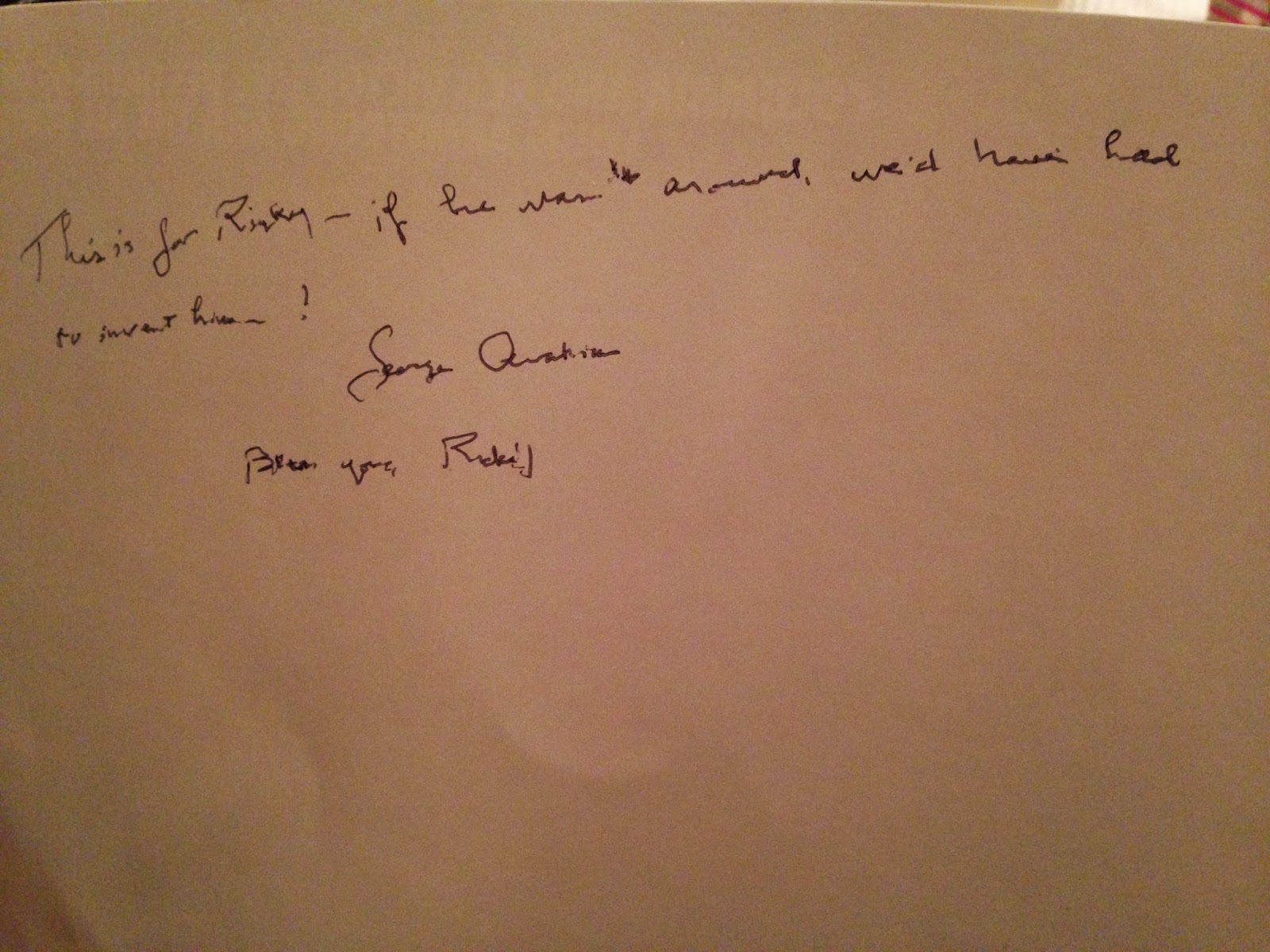 "This is for Ricky--if he weren't around, we'd have had to invent him! George Avakian. Bless you Ricky."

I'll never fully be able to convey what that means to me, especially since it's been almost 19 years since an Avakian-produced compilation changed my life in 1995. If that's the only feedback I ever receive on this set, I'll die happy....but I'm so happy that so many others feel similar about this set, so what can I say: keep those cards and letters (and pictures) coming and I'll continue to update everyone on the reception of the set in the coming months. Thanks, everybody!

RICHIE said…
Number 141 checking in. Thank you to George, Scott, Andres and Ricky for putting together such a well thought out presentation. Nobodys getting rich on this project but we as fans are listening to gold. Hearing St Louis Blues from Newport 58 is worth the price alone.
June 16, 2014 at 8:48 AM