I'm happy today's a Saturday and most people are off of work and the kids are out of school because today should be a national holiday: it's George Avakian's birthday!

If you're reading this here blog then there's a good chance you already know who George Avakian is and why he's so important to the music we love. If you don't know....for shame! While still a student at Yale, George practically invented the concept of a concept album with "Chicago Jazz" on Decca, then pioneered in Columbia's influential series of reissue albums shortly after, digging up some previously unissued Hot Five and Hot Seven masterpieces from the Columbia vaults. After the war, George continued to move up the ladder at Columbia, eventually heading the pop music album department after long-playing 33 1/3 albums exploded in the 1950s. Into the late 50s, he produced essential recordings by Louis, Miles Davis, Erroll Garner, Eddie Condon, Dave Brubeck, Buck Clayton, Duke Ellington....what more do you need? Even after leaving Columbia, he continued to have the master touch, helping to discover Bob Newhart and later overseeing Sonny Rollins's fantastic RCA Victor recordings. So yeah, George is a legend of legends and a NEA Jazz Master, too.

I might not be writing this blog if it wasn't for George Avakian. Around September of 1995, I had my first run-in with Louis Armstrong when he unexpectedly showed up in the middle of The Glenn Miller Story to steal the film with a hot version of "Basin Street Blues." My curiosity was piqued. Shortly after, I told my mother to take me to the local library in Toms River because I needed to check out some more of this Satchmo fellow. I don't remember how many choices there were but there were many. Perhaps my life would have changed if I grabbed some inferior-quality bootleg. But no, there was one cassette that looked appealing and I liked the concept: 16 Most Requested Songs. 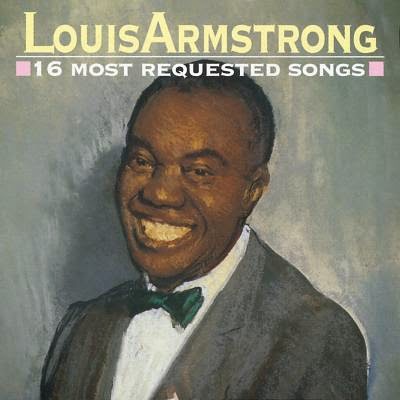 Well, my friends, that was the one that did it. "Mack the Knife" was the opening track and I was hooked immediately. With each passing song, I found myself getting in deeper and deeper....until track 14, "St. Louis Blues," from Louis Armstrong Plays W.C. Handy. When Trummy Young's solo ended and Louis began leading the final two-chorus charge home, something shifted in my brain. I knew right then and there I'd never be the same.

OK, so why did this tribute to George turn into a memoir about me? Because not only did George oversee that compilation, but he also wrote the liner notes and produced 15 of the 16 "most requested" songs on the tape. So I can specifically say that George Avakian's Louis Armstrong recordings changed my life. I owe George everything. To remind myself of that, I recently put up a "Wall of Avakian" in my home office: 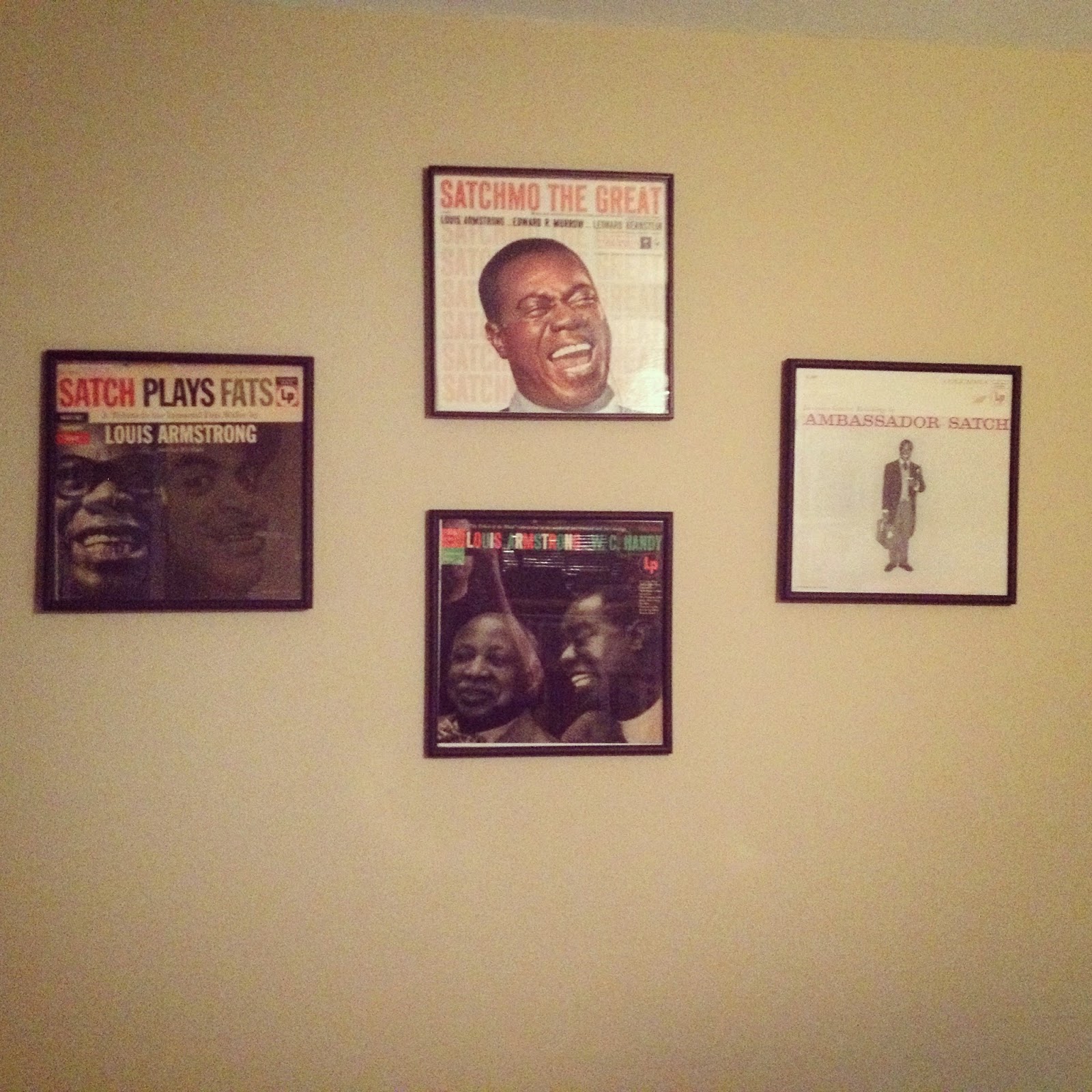 Flash forward about eight years. In 2003, I went to see David Ostwald's Louis Armstrong Centennial Band at Birdland with my best friend, Mike. It was my first time there and I almost had a heart attack when I saw George Avakian sitting at the bar! I barely remember the music as I spent most of the time working up the nerve to introduce myself. Mike finally convinced me to do it and I did, but not without some stuttering and knee-knocking. George couldn't have been nicer and gave me his e-mail address, telling me he wanted to send me some liner notes for the reissue of Satch Plays Fats that Sony chose not to use (their mistake!). The notes were terrific but I was too nervous to keep the communication going, afraid I might be pestering him or something (not that he ever gave me that feeling).

By 2007, I had an agent trying to sell my book about Armstrong and I was booked to give a lecture at the Institute of Jazz Studies. I found George's e-mail address and wrote him again, re-introducing myself, inviting him to my lecture and asking if I could interview him for the book. We immediately set up an interview time....and then he surprised me by showing up to my lecture! Not only that, we ordered a pizza beforehand and split the bill. "I just split the bill for a pizza with George Avakian," I kept telling myself over and over. It was a real "pinch me, I'm dreaming moment."
Fortunately for me, it was just the start of a beautiful friendship. We've had quality time at the Satchmo Summerfest in New Orleans every year, I played the piano for him at a party at David Ostwald's house once, he greets my wife warmly each time he sees her and always asks about our kids and I consider myself friends with his children, one of whom recently referred to me as an "Honorary Avakian." I don't think I'll ever get an award or honor that'll top that one. Even this past January, I had a vodka tonic with George, which might not sound like much....but I don't drink alcohol! (No major reason, I just don't like it.) But when George Avakian is drinking one and asks you to join, you don't say no.

But of all the moments I've spent with George, the topper came last summer at the Satchmo Summerfest in New Orleans. By that point, I had been deep in the preparation for the Mosaic Records boxed set I'm co-producing with Scott Wenzel (once that's looking like a late-April/early-May release). I told the Satchmo Summerfest people that I'd love to give a preview of the set. They thought it was a fine idea but at the age of 94, no one was certain if George would be attending the festival. I asked David Ostwald (another "Honorary Avakian") to join me just in case George couldn't make it and I prepared a "solo" version of the presentation and another version if George made it.

Well, George not only made it, he stole the show! Seven months later, people are still e-mailing me and writing me about what happened that afternoon. David and I asked George questions about working with Louis and all was fine....but then I started playing him things from the upcoming Mosaic set--culminating in a 16-minute conversation he had with Louis in 1956--and watching him react and spring to life was positively inspiring.

I'm happy to report that the Summerfest people gave me a DVD with all the seminars from the 2014 festival. I've been so busy, I haven't had much time to do anything with it but I finally got started last week and uploaded the entire presentation with George and David. This was online for a few weeks after the festival and I shared the original link back then, so some of my readers might have seen this already. That's okay; watch it again. Share it with someone who loves this music. It was such an honor to be a part of this moment. I'll never forget the standing ovation at the end as long as I live. Ladies and gentlemen, George Avakian!

So there you have it. I'm happy to report that I now have final reference copies of all 9-CDs of the set. There's a few more tweaks that need to be made but the end is near. (Sorry for all the "January" talk in the video....better late than never!) George's reputation doesn't need any further boosting but I hope this Mosaic box serves as a definitive testament of sorts to the timeless work George did with Louis in the 1950s. And George will be celebrating his 95th at Birdland in the coming weeks, once again with David Ostwald's Eternity Band (another thing to thank George for as he got David that gig in 2000 and it's still going strong--into eternity--14 years later).

Thanks again, Uncle George. Thanks for everything. And Happy Birthday!

RICHIE said…
I can't watch that moment without getting all filled with emotion. George had a very important impact on the music of that era and he did it with quality. Quality artists, product and production. He set a standard of pride the industry still aspires to. Thanks Ricky for sharing your time with him with us.
March 20, 2014 at 5:39 PM