The Night Before Christmas

Well, today is the day before Christmas, so what better way to celebrate than by listening to Louis Armstrong's reading of "The Night Before Christmas." (I caught up with the East Berlin concert so I didn't have time to post my usual round-up of Louis's Decca Christmas recordings, but you can still read last year's version here.) I've shared this in previous years, but I think it's only an appropriate annual tradition. This was Armstrong's final record, made February 26, 1971 in his home in Corona, just a few days before his last extended engagement at the Waldorf-Astoria, an engagement that pretty much sealed the fate of the frail trumpeter. He passed away on July 6, 1971.

But enough sadness! Louis Armstrong was the personification of joy and the man was terrific around children, two attributes that come to the forefront of this reading. And I recently learned some new information about this record that I'd like to share. One of Louis's private tapes housed at the Louis Armstrong House Museum (aka my employer) featured a tape contents sheet inside of the box on which Louis wrote, "Louis Satchmo Armstrong talking to all the kids from all over the world - at Xmas time." Here it is, from the Armstrong House Online Catalog (as you'll see, the rest of the tape featured a 70th birthday tribute to Louis given to him by his friend Millie Hoffman, as broadcast by Chuck Cecil on December 26, 1970): 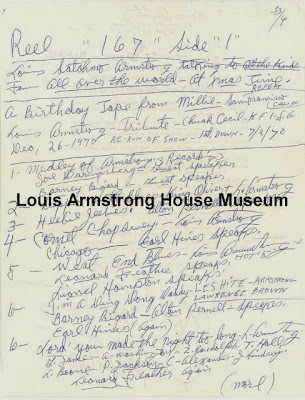 Lo and behold, when I played the CD, it opened with TWO versions of "The Night Before Christmas"! What's crazier is the sound quality was better on the tape then on the final released record. I listened to them both and it struck me: they were two different readings. Louis's first reading is delightful, but he's a tad hesitant at the start and at one point has trouble turning the page (causing him to ad-lib, "Good old Santa!"). The second take was mostly used for the master though, they edited out Louis's clearing his throat early on.

Thus, we may never know how this recording came to be. Did Louis do it on a whim and someone--maybe Lucille?--brought it to the attention of Continental Records? Or did Continental ask him to record it (in February, two months after Christmas) but Louis, ailing a bit and probably unable to go to a recording studio, just recorded two versions in his den and sent it over to Continental to edit together the best parts? My assumption is that it was spurred on by the record label because why else would Louis read "The Night Before Christmas" two months after Christmas?

According to the October 9, 1971 issue of "Billboard," though Continental produced it, it was actually distributed by the tobacco firm, Lorillard. If you bought a carton of cigarettes, you'd get a free record! (Where have those promotions gone?) Lorillard printed up one million copies to start selling for Christmas of that year and they even awarded Lucille with a gold record, which we have at the Armstrong Archives.

Both surviving takes are very special and if you were to make an appointment to visit the Armstrong Archives at Queens College, I'd definitely recommend a listen. And thanks to the Louis Armstrong House Museum Online Catalog, here's the very cute collage Louis made for the tape box, probably made right before the Waldorf gig: 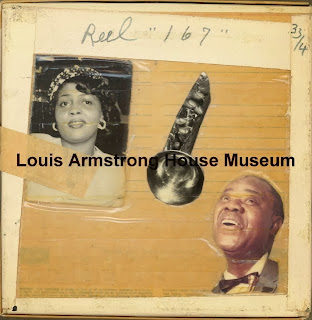 Louis, Lucille and a trumpet....who can ask for anything more?

Now, let's listen to the original released version (call the children to the computer!):

Later, when Brunswicky issued it, they added some silly sound effects and background music. To hear that version, click here:

Thanks for listening and I wish all of you a wonderful holiday...and that goes for Satchmo, too!

Unknown said…
So much warmth, sincerity and heart even his last recording ever. What an extraordinary man.
December 25, 2013 at 6:26 AM

Seymour said…
So that story about Louis refusing to clear his throat from the age of 5 until he died is complete mythology?
April 12, 2014 at 5:22 PM