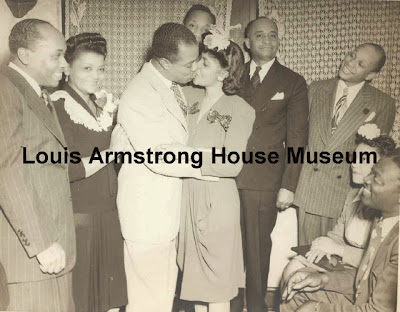 After months of living on a band bus during one of Louis's endless tours of one-nighters, Lucille campaigned to buy an actual home, settling on the modest space at 34-56 107th Street. It was purchased for $8,000 on March 15, 1943 and the rest is history.

Louis and Lucille lived there until their respective deaths in 1971 and 1983. She left the House and all its contents to the City of New York and they, in turn with the Louis Armstrong Educational Foundation, anointed Queens College to administer it all. All of Louis's tape recordings, photos, scrapbooks, band arrangements, books, trumpets, mouthpieces, you name it, were donated to the College, which set up a Louis Armstrong Archives, opened by Michael Cogswell in 1994.

I first visited the Archives in January 2006, a day that truly changed my life. I was sitting on a 350 page thesis on Louis's later years but my research was missing one thing: Louis's voice. That January day, I only had time to listen to a couple of private tapes but on each one, Louis  basically repeated some of the themes of my research: he was playing better in the 1950s than any other time in his life, he didn't believe in categories, he was no Uncle Tom, etc. From 2006-2009, I made multiple trips to the Archives, exploring different things, but always returning to the tapes, which I listened to dozens of in a four year stretch.

And then, on October 13, 2009--four years ago yesterday--I was named Project Archivist of the Armstrong Archives. I truly landed a dream job, writing about it as soon as I got the news in this blog from September 2009. I spent my first year processing the monumental Jack Bradley Collection, then spent the next year working on the Archives' other major collections and building up the aforementioned Online Catalog. When I was retained as full-time Archivist after my original grant ended, I continued to hit the ground running, rewriting every entry on the Online Catalog on Louis's private tapes and even transferring 130 of them that had never been heard, resulting in this other blog from earlier this year that I'm very proud of. (And yes, I think I'm the only man alive who has listened to all 700-or-so tapes.)

Last week I finished cataloging the massive collection of an early friend of this blog, influence and mentor, Gösta Hägglöf, and I continue to stumble across incredible new discoveries on almost a weekly basis. My co-workers and interns have all been great, as have the hundreds of people who have visited me at my post. And I hope they keep coming because I know I'll never get tired of wheeling out the case with Louis's trumpets.... 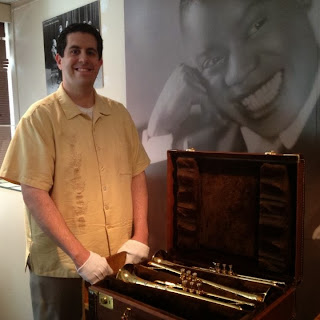 But enough about me; my anniversary was yesterday and it's now time to focus on tomorrow: the ten-year anniversary of the opening of the Louis Armstrong House Museum! If you're in the NY area, we're having an event that is the definition of bang for your buck. Dig this: $30 gets you in, gets you a Creole dinner by the Cooking Channel's Tamara Reynolds, gets you beer and wine, gets you a look at the House and gets you a concert by the Hot Sardines! Seriously, if you have an excuse not to go, well, I'm not buying it. Tickets are still available and can be purchased here.

In addition to that, my new exhibit on Louis's 1957 tour of South America will be up and running, featuring many photographs, including unpublished ones, by the legendary Lisl Steiner. And even more excitingly, we're unveiling a "life mask" of Louis that was created in the 1950s and was hung on the walls of the Armstrong House into the 1960s. It has never been displayed to the public and after some recent conservation overseen by our Curator, David Reese, it simply looks stunning. Here's a photo of Louis with the mask and two people we're assuming to be the original creators. Has anyone out there ever seen this before? I've been researching Louis for 18 years and have never come across a mention of it and Louis never discussed it either (though he made three tape box collages out of photos from this occasion!). 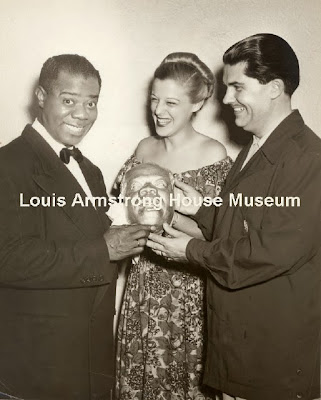 There is definitely a buzz around the Louis Armstrong House Museum these days....but especially today. Thanks to the tireless efforts of our Marketing Director, Jennifer Walden Weprin, the Associated Press wrote an article about our tenth anniversary that has been spreading like wildfire today. I noticed it trickling out around 6:45 this morning. As I write this at 2 p.m., it has been picked up by 278 outlets, including a lot of big shots (USA Today, Huffington Post, ABC News) etc. It's a wonderful story and I encourage you to check it out--and spread it around your friends!--by clicking here.

And finally, to bring back to a personal note: my memory is fading, but I know for a fact that the music of Louis Armstrong changed my life when I went to my local library in Toms River, NJ and checked out a Columbia compilation, 16 Most Requested Songs, in October 1995. I wish I remembered the date or I'd be celebrating that, too. My memory is telling me October 5, 10 or 12--there was a time in high school when I knew--but I can't remember. Regardless, every October I offer an internal celebration of the anniversary of the big bang moment that really changed my life. I never really thought I'd make a living being a giant Armstrong nut but somehow it's happened, thanks to my association with the Armstrong House. So I'm personally very grateful for everything that happened and all involved--Louis and Lucille picking Corona, Lucille's will, the Louis Armstrong Educational Foundation, Queens College, Michael Cogswell and everything and everyone in between--to even make the Armstrong House a reality and to give a schlub like me a livelihood.

And a humorous aside: when my 15-year-old self got hit with the Armstrong bug but naturally, being a moldy fig jazz fan doesn't make a prom king so for much of my high school existence in the late-90s, my jazz obsession was kept to myself and my circle of close friends. It could only stay bottled up for so long and by my senior year, it was part of my reputation. Still, I had some horrific experiences in my teenage years with members of the female persuasion. Enough to fill up a blog just about that. (Thank goodness Margaret came along ten years ago and I've never looked back!) So it was pretty surreal when on Friday--which might have been the anniversary of the big bang for all I remember--I spent an hour of my afternoon talking about Louis and the Louis Armstrong House Museum on a radio interview with two teenage girls, Rachel Trachtenburg and Julia Cumming, on their show Pure Imagination. If you would have told 15-year-old Ricko that almost 18 years to the day later, he'd be preaching about Pops on a radio show aimed at teenagers, he would have told you you're nuts....but I'm not complaining! And the show was a ball; click that link to listen.