90 years!  Today should be a national holiday. 90 years ago today, King Oliver's Creole Jazz Band made its first records for the Gennett label Richmond, Indiana. Makin the trip to Richmond were Oliver on cornet, Johnny Dodds on clarinet, Honore Dutrey on trombone, Lil Hardin on piano, Bill Johnson on banjo (louder for recording than his normal bass) and Baby Dodds on drums (though technically woodblocks and briefly, a Chinese tom tom).  Oh, and also the band's second cornetist, young, 21-year-old Louis Armstrong.

Yes, 90 years ago today, Louis Armstrong stepped in front of a recording device for the very first time. Just think of what would follow over the next 48 years.

And really, how lucky are we that Louis was born in 1901 instead of 1801. Imagine if music history proceeded as it did--minstrels, ragtime, New Orleans jazz, etc.--but a hundred years earlier: no recording devices. Someone surely would have recognized Armstrong's genius and there would have been transcribing parties to notate his improvisations. Maybe some would miss the mark; maybe others would transcribe them perfectly. Regardless, we'd be left with folio's of great Armstrong solos of the 1800's and trumpet players would do their best to play them. But even if that was the case, no amount of written music could convey Armstrong's feeling, his vibrato, that tone.

No, we should be thankful every day that Louis was born in the early days of recording. When he first stepped into a studio on this date in 1923, the methods were acoustical and primitive...but it worked. The last time he stepped into a studio in 1970, he recorded in stereo with a Nashville rhythm section while the tracks were edited in postproduction and overdubbed later with a horn section. The technology--and music--had changed but Louis was still Louis and he had left behind 48 years of recordings: with big bands, small groups, with just piano accompaniment or guitar, with Hawaiian musicians, New Orleans musicians, other singers and entertainers, etc. All because Louis Armstrong was born at the right place at the right time.

I don't have the time to do a blow-by-blow blowout on that first Oliver session of 90 years ago. But the music should at least be listened to and celebrated on this date. If you really want to do them justice, stop reading right now and pick up Doug Benson and David Sager's labor of love, Off the Record. Benson's superb transfers will never be bettered and I learn something new every time I read though Sager's indispensable notes. It's the best way get all of Oliver's 1923 sides and will likely remain that way until the end of time.

Still, I want to say a few words about the music. If you've heard it, you know this isn't stereophonic sound, but if you concentrate and listen to it in a quiet place, you can hear some marvelous things. Unfortunately, Oliver's tone is a little thing and Louis had to much respect to play over him so sometimes, the leads are bit blurred. Gennett's engineer famously had to place Louis apart from the band so his tone wouldn't overpower his mentor's. "When we made those 'Gennett' records Joe wasn't in his prime, like he was before he sent for me," Louis wrote in 1950. "To show you how much stronger I was than Joe: those were acoustical records, with big horns; Joe would be right in the horn blowing and I would be standing back in the door playing second trumpet."

Actually, some of Oliver's best recorded playing comes on the very first selection, "Just Gone." Technically, for the trivia buffs out there, this is Louis Armstrong's first record. Alas, he's almost inaudible the entire time but Oliver is captured very well, giving us a great opportunity to his rhythmic way of phrasing on the beat:

Canal Street Blues was next, co-composed by Louis and Oliver. If you click that link in the title of the song, that'll take you to a blog I wrote on Louis's history with that song; you'll hear the Oliver recording, read my analysis and then listen to Armstrong's remakes in the 1950s and 60s. Worth checking out on this anniversary!

"Mandy Lee Blues" is up next, featuring a very nice balance of the band. It's entirely too short (2 minutes and 13 seconds) but a highlight is when Baby Dodds breaks out his tom-tom behind brother Johnny. Oh, if only Baby could have recorded with his full kit!

"I'm Going to Wear You Off My Mind" follows and is one of those tracks where the playing of the cornets is muddled throughout. As Sager points out in his liner notes, the engineer probably changed the band's positioning to accommodate Lil's piano solo.

And then finally, the main event, "Chimes Blues." On this, the fifth song recorded that day, Oliver let his disciple take a two-chorus blues solo, whose main motif sounds written out or at least pre-arranged. Nevertheless, Louis steps up close to the recording horn and commences with 24 bars of magic, his tone already present at such a young age. The rest of the performances features the chime-like effects from Lil's piano; it's cute and was probably thought to be the original centerpiece of the record (hence the title "Chimes Blues") but today, 90 years later, it's that first record Louis Armstrong solo that thrills us. Listen to it twice!

So that was just the beginning of one of the most fruitful recording career's in the history of modern music. The Oliver band wasn't done; on April 6, they recorded four more songs, each one a classic, including one named after one of Louis's nicknames, "Dipper Mouth Blues." They were paying tribute to him after one day! Okay, maybe I'm getting carried away but the April 6 sessions are for another day. Today, just take a few minutes to marvel at the fact that Louis Armstrong's conquering of the music world truly began on this date, 90 years ago today. 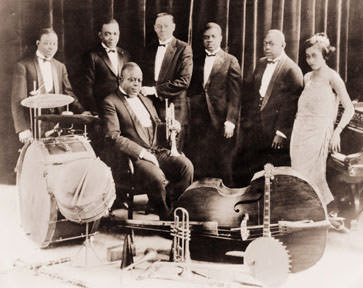 Anonymous said…
I've been listen to the Oliver sides for more than 40 years. I never tire of them or not hear something interesting I hadn't heard before. Thank you for remembering this historic date - and this historic ensemble. Long live Mr. Armstrong's music!
April 5, 2013 at 1:34 PM