Everybody knows Louis Armstrong and everybody uses YouTube. Not everybody knows Franz Hoffman, but hopefully after reading this, you'll know him and appreciate him like I and so many other jazz lovers do.

I first heard of Franz when I was a student at Rutgers, getting a Master's in Jazz History and Researcher. My mentor, Lewis Porter, wold tell the class about Hoffman's Jazz Advertised series of books, which were available a short walk away at the Institute of Jazz Studies. Hoffman spent goodness knows how many decades copying every jazz advertisement he could find in newspaper archives (especially black newspapers), compiling them into several, large volumes. At the same time, he was a tireless chronicler of the great New Orleans trumpeter, Henry "Red" Allen, plus his frequent partner, trombonist J. C. Higginbotham. I used to marvel at those big books and did incorporate them into my research. But after I graduated in 2005 and continued my path of Armstrong obsession, I forgot about them, barely finding time to get to the IJS to use them.

In October 2009, I was hired as Project Archivist for the Louis Armstrong House Museum. One month later, I received my first phone call direct from Germany from Franz! It was like talking to a hero but Franz didn't have time for flattery; he wanted me to listen to the complete 1937 Fleischmann's Yeast Broadcasts that Louis hosted and wanted to know if Red Allen or Higgy played any solos or obligatos on the non-Armstrong material. I was happy to help. In the ensuing four years, Franz calls every few months, asking for help, updating me on his projects or sharing something wonderful, such as a chapter of his Red Allen "Day by Day" document that covered Allen's 1937-1940 tenure with Armstrong in incredible detail. I always looked forward to hearing from Franz and enjoyed knowing him as a friend. A few months ago, he even sent me this lovely recent photo of him and his wife: 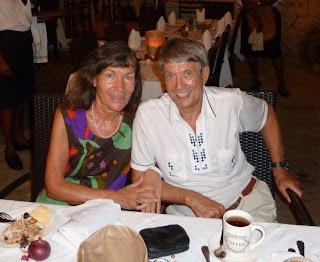 If that was the end of the story, Franz Hoffman would have done enough to be thanked by jazz researchers for generations to come. But no, in his mind, he hadn't done enough yet. You see, Franz, like so many of the beautiful people I've met in this wonderful world of jazz research, is a sharer. After years of amassing an incredible collection, he decided to go public with it.

First came the books, with every page uploaded to the fabulous RainerJazz website. Free of charge. Seriously, you have some free time on your hands? Go here to search through his Black Newspaper research. Want to see that Red Allen bio-discography? Here it is; chapter 5 is the one on his years with Louis.

Uploading everything onto RainerJazz would haver really solidified Franz's place in the pantheon of jazz researchers. No more trips to the Institute of Jazz Studies were necessary; now researchers from around the world can use Franz's lifetime of work anytime they please. Incredible. But he wasn't done.

On January 15, 2012, I remember being on Facebook (a frequent occurrence) and seeing some jaw-dropping things pop up on other friends' pages: Red Allen playing Body and Soul live; J. C. Higginbotham with Colemand Hawkins and Joe Thomas doing J. C. Jumps in 1957; and a Blues from Carnegie Hall in 1941 with Red Allen, Buck Clayton, Charlie Shavers, Bunny Berigan, Harry Levine and Max Kaminsky--and those are the trumpets! (The rest of the personnel is too stunning to even type.)

Yes, Franz Hoffman had started a YouTube channel under the name Hoffmanjazz and he was using it to share the most sensational treasures from his collection, audio and video. At first, it was everything you could ever dream of with Red Allen and/or J. C. Higginbotham; stuff from records, from the radio, from concerts, just remarkable things I never thought I'd here. But he kept on going: Jabbo Smith, Lionel Hampton, Willie the Lion Smith, Eubie Blake, Illinois Jacquet, Ben Webster, Oscar Peterson, Erroll Garner, the Modern Jazz Quartet, Sidney Bechet, Roy Eldridge, Art Ford Jazz Party's, New Orleans legends....I could keep going but I have to get to bed at some point.

I haven't mentioned Franz on this blog up to this point because as essential as his generous offerings are, he really hasn't shared much directly related to Louis; he didn't need my help because as of this writing, he has 467 subscribers and his videos have received over 308,000 views. Thrilling that there's such an audience for these great gifts.

But I knew Franz had an incredible collection of Louis Armstrong videos; he'd shared his list of them with me before and I salivated. And sure enough, one month ago, they started trickling onto YouTube: Louis doing Jubilee in "Every Day's a Holiday"; Louis's musical sequences in Going Places; Ain't Misbehavin' from the 1944 film "Atlantic City."

After dipping his toes in the water with those, Franz dove in fully during this last week. In the last seven days, he has uploaded so many of my favorite, rare Armstrong clips that my head is still spinning just thinking of it. I should mention that in my personal collection, I have everything he's uploaded except for two short clips. For the past five years, one of my side projects has been going around to places like the Jazz Museum in Harlem and the Satchmo Summerfest in New Orleans, giving film presentations on Armstrong, showcasing rare clips from my private stash. And one of my token lines is that the stuff I show is so rare, you can't find it on YouTube.

Well, that's not the case anymore. And instead of being sad, feeling like it's putting me out of business (which it won't; I think there'll always be an audience who wants to watch Pops with a crowd on a big screen, filled in on the backstory by an enthusiastic nut like me), I couldn't be happier. I'm a sharer; Franz is a sharer. Instead of hoarding this stuff for ourselves, Franz has made it possible for Armstrong fans around the world to see things that very few people have seen.

I'm probably going to do a bunch of new blogs on some of the videos Franz has uploaded. But a few have jumped out and I have to share them now. First, Louis's marvelous appearance on Frank Sinatra's 1952 television show, with a "Confessin'" that is as good as it gets:


One of the clips I don't have--and didn't even know existed--an excerpt of the All Stars doing "C'est Si Bon," most likely in Paris in 1960. I've read that Louis's Paris concerts on December 24 and 31 of 1960 were shown on French television but I've never known any of them to survive. Well, this is only 90 seconds but maybe it'll be enough for someone to check the vaults and discover the complete concerts!


THIS is wonderful: Louis and the All Stars on "The Ed Sullivan Show," live from Germany in 1961. Louis is on fire, turning in one of his finest "Royal Garden Blues" solos (Dan Morgenstern flipped for it at Satchmo Summerfest last year). And Louis even blows "The Saints" out over the credits, something he had stopped doing in late 1959:


And of course, more important than anything else, "The Satchmo Story" from 1962. I've written about this telecast many, many times, but have never had anything to show for it because the only clips on YouTube disabled embedding. Not anymore! This was done in a studio in Munich and is something of a filmed version of "Satchmo: A Musical Autobiography." With little time to prep and a lack of an audience, Louis is a little more subdued than normal but the music is still dynamite, especially rarities like "Dippermouth Blues," "Canal Street Blues," "You Rascal You," "I Can't Give You Anything But Love" and more. It was originally broadcast in two parts in 1962; in the 1990s, German television edited together about an hour of it, which is what Franz has shared. But there's more out there and hopefully, with some demand, we can get someone, somewhere to release it (it would be an ideal "Jazz Icons" DVD). I won't share all the parts now, but here's part 1 to get you started:


There's more--the musical sequences from "The Strip," Louis on "The Perry Como Show," Louis's European film appearances from 1959--and Franz has written in to say there's more to come. Wow! So on behalf of Louis Armstrong lovers around the world, THANK YOU to Franz Hoffman for dedicating your life to assembling this material and even bigger thanks for sharing it with the world. (And needless to say, YouTube can be a funny place; I've seen friends upload stuff for years and then one thing triggers a bad copyright reaction and everything gets pulled. Enjoy it all NOW and save if you can; precious, precious stuff!)

Sahfen said…
Thanks, Ricky for sharing these beautiful videos and thanks to Franz for his great work!
I'd like to share these two YouTube videos, a rare Italian documentary about Louis from 1967 (with fragments from the May 7, 1959 TV Show in Viareggio, Italy).
http://www.youtube.com/watch?v=hjHMou2SPvY
http://www.youtube.com/watch?v=OsHChrui00w
Enjoy and Happy Easter!