As many of you know, I'm all-Pops, all-the time. In addition to the book, the blog, the lectures, the liner notes, etc., my main gig is serving as Archivist for the Louis Armstrong House Museum (aka the Dream Job). When I was hired in 2009, one of my tasks was to perform "retrospective conversion," going through all previously cataloged items, renumbering them and enhancing their catalog descriptions when appropriate. By that point, I had already logged three years as a researcher visiting all the time to settle in with dozens of Louis's precious reel-to-reel tapes. But when I began the retrospective conversion process, I noticed that not all of Louis's tapes had been transferred to CD.

You see, the Archives at Queens College, where the tapes are housed, contain about 800 of Louis's tapes. An audio engineer was hired to transfer them all many moons ago on a grant. With time running out, the engineer realized the task wouldn't be completed so they cued up every tape and if appeared to just hold music, and no talking or personal touches by Louis, they skipped it. So when I was going through all the tapes, I noticed the engineer made the right choices just about every time. Louis made dozens and dozens of tapes of just dubs of records and when the time is running out on a grant, transferring "Louis and the Good Book" for the 14th time could seem like a waste of valuable energy. 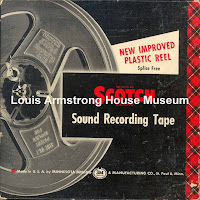 But while I was renumbering and cataloging the tapes, I came across one with the accession number 1987.3.590. I came across a tape that looked like any other. It was a black Scotch box with a plaid stripe on the right side. I had probably seen a few hundred like it, though most usually contained one of Armstrong's collages. And then I turned it over and saw some writing--Lucille's handwriting--on the bottom of the back of the box: 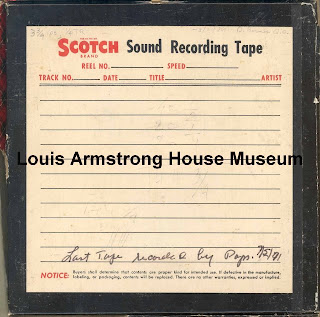 And then I opened the box and sure enough, the original tape was inside.....never copied.

Louis used to write lists of the contents to each tape but this box had no such sheet. And though the engineer must have given it a quick spin to see if it was worth copying, there was no information left behind.  Because it wasn't copied, I assumed that there wasn't anything earth-shattering on it, no "goodbye" to his fans or final secrets from his life.

But the question remained: what were the last songs Louis Armstrong listened to on the very last tape he made, the one still in the Tandberg tape deck in his home in Corona, Queens when he passed away.

Unfortunately, I, myself was hired under a grant and had to a ton of other things in the two years I was allotted. At the end of the second year, I had finished everything covered under the grant and thankfully was retained as full-time Archivist for the Museum. Now, without a grant over my head, I could dig into things I wanted to work on, as well as explore mysteries that cropped up during my first pass through our collections. Such as, what was on Louis's last tape?

We have a terrific audio lab right in our workroom at the Archives but I didn't know the first thing about copying the tapes. Fortunately, our Director, Michael Cogswell, was a pro. But the first time he sat me down to show me how to do it, the machine didn't work. Naturally. We had to find a repair place, deliver it, wait, pick it up, etc. Months passed.

By the time the machine returned, fixed, Michael had more or less moved full-time from his office at the Archives to an office next door to the Armstrong House in Corona. I knew it would be difficult to get him back at the Archives long enough for a reel-to-reel tutorial and sure enough it was. More months passed.

But this past week, the stars aligned: Michael blocked off an entire day to spend with me at the Archives. We explored the tape decks and he really did a thorough job teaching me the ins and outs of the tapes. By the end of the day, I was loading the reels, splicing a bit and feeling pretty sure of myself.

The next day, I came in and thought about going straight for Louis's last tape but I was too nervous. So I chose some other tapes belonging to Jack Bradley, tapes with material we had elsewhere in the collection. It was great practice, as I had to fix at least five splices, switch speeds in the middle of a reel and more.

By 11 a.m., I was ready. I explained to my volunteer, Harvey Fisher, what was about to happen. I went into the stacks, grabbed the tape, sat at the tape deck and loaded the tape onto the hub. I hit "Play" and held my breath as it started spinning. This is what came out:

"Listen to the Mockingbird," Louis's 1952 collaboration with Gordon Jenkins. I have probably heard this record 50 times, maybe more, over the years. But something about this occasion started affecting me, knowing it was one of the last things Louis ever listened to. After it ended, I didn't know what to expect. There was silence and then I heard record scratching and a needle drop. "That Lucky Old Sun" followed. You know, the one that "rolls around heaven all day." Phew.

As soon as I heard it, I knew Louis was listening to the Decca compilation of his work with Gordon Jenkins, Satchmo in Style. On and on it went: Louis's parody of boppers on "The Whiffenpoof Song," his passionate singing of Joyce Kilmer's "Trees," the romping "Bye and Bye" (with its chorus of special lyrics paying tribute to dead jazz musicians....seriously), the fun Halloween novelty "Spooks" and finally, Jenkins's beautiful version of Armstrong's theme song "When It's Sleepy Time Down South." In the middle, I felt tears in my eyes and turned to Harvey sand said, "I've listened to these tracks for over 15 years....but they're really getting to me today!" He agreed.

I secretly hoped the tape ended there.  Could you think of a better final tune to end his life listening, too? But no, I heard the whir of a new record spinning, the needle dropped again and I waited for what followed:

"Muskrat Ramble." Satchmo at Symphony Hall. I then noticed something: Louis's reel, at 3 3/4 speed was spinning REALLY slowly. And there was a LOT of tape left. So I went back to other work, but kept it transferring. He listened to the entire 2-LP set, probably with fond memories of the musicians and friends on that album who were no longer living: Velma Middleton, Sid Catlett and Jack Teagarden.

Almost two hours went by. I was at my computer when all of a sudden I realized "Mop Mop" was on...the final track! I stopped what I was doing and stared at the spinning reels. Would "Mop Mop" be it? Or would there be more?  It ended. Silence. Whir of a record. Needle drop. There was more: "Can't We Be Friends." Ella and Louis. Wow. One of my personal favorites, such a happy, delightful, peaceful album. I let it roll: "Isn't it a Lovely Day," "Moonlight in Vermont," "They Can't Take That Away From Me," "Under a Blanket of Blue," "Tenderly," "A Foggy Day," "Stars Fell on Alabama," "Cheek to Cheek," "The Nearness of You".....

Uh oh....time for the final track of the original album.

"April in Paris." Too beautiful to comprehend. That vocal ("April in Praris"), that trumpet solo (holding the note into the bridge like Sinatra), that final, perfectly phrased trumpet coda after Ella's vocal. Gorgeous.

Once more, I waited. There was still some tape left.

Silence. No whir. No needle. That was it. I  fast forwarded through to the end of the reel. Nothing. Just to be safe, I flipped the reel to see if there was anything on the other side. There wasn't.

The last song Louis Armstrong listened to on the very last tape he made on July 5, 1971 was "April in Paris." He left his den and headed down the hallway to his bedroom. According to Joe Muranyi, Lucille told him that Louis was feeling frisky and tried to initiate "the vonce." She declined. He went to sleep. About 5:30 in the morning of July 6, Louis Armstrong passed away in his sleep.

That ends part one of my look at Louis's final tape. I'll return next time with an examination of the final series of tapes Louis made in the months before his death. Ever want to know what recordings Louis listened to in those final weeks? Come back to find out (and to see a lot...and I mean a LOT....of collages).

(While on the subject of Louis Armstrong's death, you should really take a few minutes to watch this YouTube video of Italian TV coverage of Louis's funeral (it starts after the opening montage set to "The Saints"). Very emotional stuff: a crowd gathered in front of Louis's house on 107th St., watching as Lucille--and Lil!--leave; Louis's open casket at the Armory in Manhattan; his being lowered into the ground at Flushing Cemetery.)

Unknown said…
I listened to 'April in Paris' last night with my daughter before she went to bed. The song feels much heavier today than it did before. Good Night Mr. Armstrong.
February 8, 2013 at 2:52 PM

RICHIE said…
Ricky, I felt chills through your telling of this. Beautiful.
Thank you
February 9, 2013 at 6:36 AM

LoSnaso said…
Thank you Ricky... it's a very important your post for satcmo lovers, too young for having the great opportunity to listen to him live... beautiful job, thank you.

Sean Savage said…
I live for these moments too on my job when I'm examining an artifact with so much potential to reveal. Interesting he dubbed his records even while not adding new horn or commentary. Also nice to hear he was feeling good on his last night ("the vonce"!), even if he might have gone out feeling even better!
February 11, 2013 at 12:05 PM

Phil said…
What a wonderful concert! Every second!

Lingering tv-shots of the band members. Jewel Brown and Eddie Shu were revelations to me.

All are very very good musicians.

And especially THE MAESTRO!!

Pops is Tops, a genius!

A good and appreciative audience, too.
Ambassador Satch!
Thanks Ricky! And thanks for ALL your ecellent blogs! Can't wait for the next one.
July 8, 2014 at 2:25 AM

Rene Suprina said…
It makes me wonder if Joel listened to any of Pops' tunes before he passed away in his sleep. Thank you for sharing this...what a wonderful story.
July 5, 2015 at 6:15 PM

"Jazz Lives" @ WordPress.com said…
That the first record Louis listened to was the music he made with Gordon Jenkins has me choked up. THAT record, you know.
July 5, 2016 at 9:58 AM