Today is August 4, which means we're celebrating Louis Armstrong's birthday...right? Even I don't know what to believe anymore. As all Armstrong fans know, Louis believed he was born on July 4, 1900. He said his mother called him a "firecracker baby." For his entire life--and about 15 years after--July 4 was synonymous with the birth of the United States of America and the birth of the man who ruled 20th century popular music.

I feel that without a doubt, Louis believed he was born on July 4. In 1918, when it came time to register for the World War I draft in New Orleans, he filled out July 4, 1900:

But hold the phone! In the mid-80s, diligent researcher Tad Jones found a baptismal certificte from Sacred Heart of Jesus Church in New Orleans, showing that Louis Armstrong, "niger, illegitimus," was born August 4, 1901! WTF!? Okay, so Louis was born on a month later AND a year later, August 4, 1971, meaning he died at the age of 69. Fine by me! I'm sitting here at the Satchmo Summerfest in New Orleans, where Louis's birthday is celebrated annually in the beginning of August. Up north, my employer, the Louis Armstrong House Museum, is having a concert today to celebrate the birthday.

But stop the presses! A few weeks ago, my good friend Hakan Forsberg wrote in to say that on the Dixieland Digest mailing list, someone claimed the Louis's social security application existed and on it, he listed yet another date: July 4, 1901. Seriously? I had never heard this. But I checked our Archives, and sure enough we had a photocopy of it, which Michael Cogswell said he printed off the internet 10 years ago. Here it is: 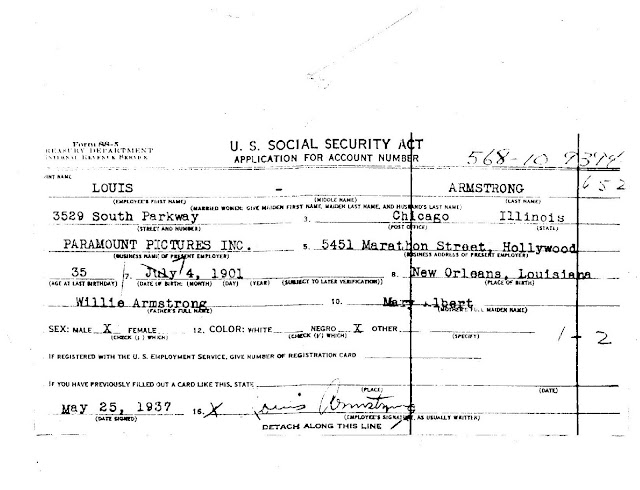 Wow, right? Louis was at Paramount in Hollywood filming "Every Day's a Holiday" when he filled this out. July 4, 1901. Louis, sticking to July 4, but finally admitting to the government that he was born a year later, 1901. We can quit now....right?

Not so fast. I went a step further and looked up Louis's entry in the Social Security Death Index. There it is, Louis Armstrong, his card issued in California...birthday July 4, 1900! So at some point, Louis got his card back and said, "Oops, that's not right" and had it corrected. I think. I don't know, it's all speculation at this point. The social security application is pretty thorough, even saying that Louis was 35 at his last birthday, which would have been true if Louis was born in 1901. Maybe he signed it without really looking at it?

Then there's the whole matter of lying. I don't think he though, "Yikes, it's the U.S. government, I can't lie to them" because he already lied on his draft registration. And he wasn't going to lie to make himself appear younger since he already published his July 4, 1900 date in his autobiography the previous year. Goodness knows he didn't have a birth certificate so who was going to check anything. The fact that his social security card was changed to reflect July 4, 1900 before he died means, to me, that he really believed and wanted to stick to July 4, 1900 during his lifetime.

But what about August 4, 1901? That's the one thing we have official documentation of from the time of his birth, right? Again, hold your horses (I'm running out of cliches). Yesterday at the Satchmo Summerfest, my hero Dan Morgenstern was interviewed onstage by David Ostwald. Without any prodding, Dan volunteered information that he got from an unnamed New Orleans historian who told him that baptismal certificates from this period are often unreliable. Dan said he doesn't quite buy it (8-4 is easy to mistake for 7-4) and he still prefers celebrating it on July 4, which drew applause from some in the room.

So the consensus is....there is no consensus. As Michael Cogswell told me, there are only three official documents with Louis's birthday on them: the baptismal certificate (August 4, 1901), the draft registration card (July 4, 1900) and the social security application (July 4, 1901). Three documents, three different dates.

The only outcome is to celebrate Louis's birthday on July 4 AND August 4. And to celebrate his contributions to civilization every other day of the year. Happy birthday, Pops. And thank you.

Phil said…
Every day is a Louis Armstrong birthday!
The Kings and Queens of England (and of the rest of the United Kingdom) have TWO birthdays, one 'offical' and one actual. The 'offical' birthday is so that 'birthday honours' can be awarded in June, ie, better weather for outdoor ceremonies.
So.. if Queenie can have TWO birthdays, then I'm sure that King/Emperor/President Louis can have two as well.
Phil (UK)
August 5, 2012 at 12:35 PM

Anonymous said…
I'd rather the precise date remain a mystery. Then I'll be able to continue celebrating it twice a year. Listening the WKCR birthday broadcasts have become a summertime tradition of mine that I'd hate to lose.
August 5, 2012 at 6:42 PM

Lou said…
Pehphaps we should designate the period between July 4 and august 4 as "SATCH-month" and celebrate the great an EVERY day
August 8, 2012 at 4:14 PM

Greg Beaman said…
As someone who spends quite a bit of time in various New Orleans archives every week (which gives me cause to walk past Louis' birthplace near City Hall most days), I can say that the record keeping around 1900 wasn't always top notch. While I'm a trumpeter by night (and by day, if they're paying!) I also research historic properties in the area (check out: http://OurHouseStoriesNOLA.blogspot.com). Many times, names will be spelled differently in different documents recording the same sale, property surveys will come up missing, and dates don't always match. If the clerks documenting property transactions worth thousands of dollars got these minor details wrong, who's to say the clerk documenting the birth of an illegitimate child from Back of Town got it right?
That said, I agree with Lou that we should just declare "SATCH-month" from July 4-August 4 and be done with the whole thing! Next time I'm at the City Archives, I'm going to do a little digging and see if I can't make the find of the century! You'll be the first to know!
August 9, 2012 at 2:23 PM