Five years ago today, I finished a grueling summer day of painting houses for my father’s painting business, my summer job since high school and my permanent job since graduating with a Master’s degree from Rutgers in 2005. But this was an unusually exciting day, and not just because it was a Friday, the end of the week. I had the idea of starting this blog, one that would be devoted completely to Louis Armstrong’s music. I had been shopping around my book for a year and was getting soundly rejected at every turn so I figured it was time to try and make a name of myself. At 5:51 p.m., I made my first post, “Introduction to this Blog,” followed by my first real entry on “We’ll Be Together Again.”

It ended up being one of the most important decisions of my life.

As they say, the rest is history. It's been a joy doing this for the last five years. And the anniversaries have always been extra important to me because of what else was going on in my life. My first anniversary was less than one month away from my first appearance at the Satchmo Summerfest in New Orleans and right after my first Armstrong lecture at the National Jazz Museum in Harlem . My second anniversary was right before I handed in my finished book manuscript to Pantheon (and I was also a new father!). By year three, I was the Archivist for the Louis Armstrong House Museum. Last year, I spent my fourth anniversary in a TV studio in Baltimore, celebrating the arrival of my book with a book tour through the east coast.

And today? Things keep getting more and more surreal (by that, I mean better). The book is now out in paperback and doing very well. I'm still the Archivist for the Armstrong House and I still pinch myself every time I show up for work. I'm now prepping for my FIFTH appearance at the Satchmo Summerfest in New Orleans and--no joke--my 17th Armstrong lecture at the Jazz Museum in Harlem.

And what an afternoon it will be. If you're anywhere near Harlem this Saturday, July 14, come out to the Jazz Museum because I'll be hosting a free panel from noon until 4 p.m. featuring four Pops-loving trumpeters: Bria Skonberg, Warren Vache, Jon Faddis and Joe Wilder! Don't worry, even if you're halfway around the world, there will be audio and I'll post it as soon as I can.

That's not the only thing I'm working on these days. Last summer, I helped Universal with their massive 10-CD boxed set, "Satchmo: Ambassador of Jazz." There was a bonus disc featuring rare and unreleased material from Louis's studio sessions of the 1950s and 1960s. Well, next week Universal is offering a digital download featuring every scrap of music recorded on August 1, 1957, featuring Louis with the Oscar Peterson Trio and Louie Bellson. Take after take of "Makin' Whoopee," "I Get a Kick Out of You," "Let's Do It" and "Willow Weep for Me," along with breakdowns, discussions and even a warm-up "Indiana." A day with Pops! I'll have more info when it's released.

Also, I've gotten into the producing side of the business and it's with great pride to announce that I'm co-producing a "Complete Satchmo at Symphony Hall" two-CD set with Harry Weinger that will be issued on Hip-O Select in October! It's going to be a dynamite set, the complete concert released for the first time, and it couldn't be done without Gosta Hagglof, my late friend and one of the first people to ever write me when I started this blog. Hagglof donated his entire collection to the Louis Armstrong House Museum and it was in there that I discovered his complete copy of the show. Kudos to Universal for realizing how important it was and for agreeing to issue it. I'll have more to post on it as we get closer, but it's been a fun process helping to get it released. I even wrote the liner notes, too.

Speaking of which, I was also recently contacted by Sony to write liner notes for another Armstrong boxed set, a 10-disc set featuring all of Louis's recordings as a leader of OKeh, Columbia and Victor from 1925-1933. That one should be out in October, as well. And I've hinted at another project I have my hands in that, if given the green light, will be a dream come true. But my lips are sealed until then....

None of these things would have happened if I didn't start the blog and I sure wouldn't have kept it going without the support, e-mails and comments from you, my dear readers. I'm sorry I don't get to post as regularly as in the old days but it's still a joy to be able to write anything I wand--and as much as I want!--about old Pops here whenever I can. So thanks for everything and here's to the next five years! 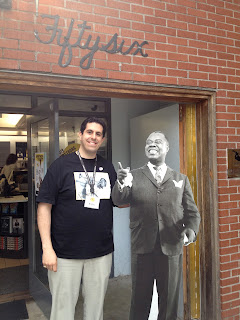 "Jazz Lives" @ WordPress.com said…
Cupcakes all around! You have given us so much in the past five years, through the blog and the book and the Archives and the House and the CD issues and the lectures . . . it would take fifty years (or fifty loaves) to absorb it all. May you always be this happy and this engaged in what you were born to do.
July 13, 2012 at 3:09 PM

Larry said…
Really looking forward to all of these releases Ricky.

Phil said…
Wonderful blogs for FIVE years! Thanks, Ricky (the professor of Satchology at the University of Satchmo).
Here's to the next FIFTY years!! (hic)
Phil (UK)
July 16, 2012 at 3:23 PM

RICHIE said…
Thanks Ricky and congratulations. You make my life richer with great insight and passion for God's greatest example of man at his best. May you always stay committed to everything Pops.
July 17, 2012 at 4:57 PM

Swingin' Drummer said…
All great news, but particularly excited about the complete "Satchmo at Symphony Hall". Long one of my favourites, not least for Big Sids amazing and beautifully recorded drumming. Can't wait!!!
Seems we have a deludge of Pops' releases coming our way, very exciting!
August 10, 2012 at 6:18 PM