I've been so wrapped up in various anniversary posts lately that I haven't had a general update of Armstrong news in quite some time. There's plenty to report on so let's dive right in.

First off, some sad news. On Monday, April 9, Phoebe Jacobs passed away at the age of 93. Few people have done more for Louis Armstrong's legacy than Jacobs, who for years served as the widowed Lucille Armstrong's traveling companion and became Vice President of the Louis Armstrong Educational Foundation after Lucille's death in 1983. Phoebe made it her business that Louis's life and music would be celebrated for years to come; without her efforts and the efforts of the Foundation, there would not have been a Louis Armstrong House Museum, for one. In my 2 1/2 years with the Armstrong House, I'd talk to Phoebe multiple times a week. Sometimes she'd give me hell and light a fire under me to get something done, but everything she did was with Louis in mind. She eventually became one of my biggest supporters, coming up with ideas to publicize my book and attending many of my presentations at the Armstrong House and the National Jazz Museum in Harlem. In fact, the last time I saw her was in Harlem in January, when she attended two my sessions there, including a panel I did with George Avakian, Dan Morgenstern and David Ostwald. Phoebe stole the show with her stories from the audience; audio is still up and can be heard here: Louis Armstrong Panel Audio. I still can't quite envision not hearing from Phoebe every week at work; she'll be greatly missed but I know the Louis Armstrong Educational Foundation will continue to do great things inspired by both her and Louis's lead, such as the recent launch of their website: Louis Armstrong Educational Foundation 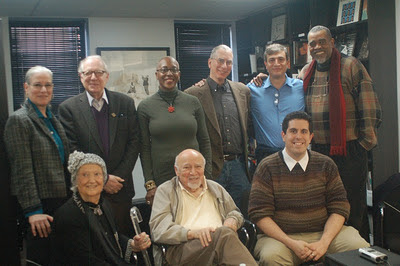 On a personal note, I disappeared from the blog for a bit in late March but it was all for a good reason: I attended the Dave Brubeck Festival, given by the Brubeck Institute at the University of the Pacific in Stockton, California. It was a beautiful event and I had a ball during every minute (it was also my first trip to California; if you're "friends" with me on Facebook, you've seen the results of my trip to In-N-Out Burger!).

I was invited out there by Keith Hatschek, who has been doing heroic work in researching "The Real Ambassadors." This is the 50th anniversary of the one and only performance of Dave and Iola Brubeck's landmark work at the Monterey Jazz Festival. To commemorate, Keith invited me to speak about Pops's participation in the project, as well as the great Yolande Bavan, who replaced Annie Ross in Lambert, Hendricks and Ross and took part in that historic Monterey performance. Not only was our panel a success, but I was blown away by the Brubeck Collection in the University of the Pacific's library. I'm so used to working with Louis's stuff every day, that it was great to see similar dedication for another jazz great. For "The Real Ambassadors," they had letters from Joe Glaser about it, original sheet music and scripts, session tapes from the 1961 Columbia album (I was in tears listening to Louis work on "Summer Song" and "Lonesome") and so much more.

And here's the great news: thanks to the dedication of Shan Sutton and Michael Wurtz in Special Collections, they launched an online exhibit dedicated to "The Real Ambassadors." And as Pops would say, it's a gassuh! Photos, a PDF of the original script (titled "World Take a Holiday") and the script Iola Brubeck prepared for Monterey (complete with music), audio letters from the Brubeck's to Louis, showing him how the songs went, and so much more. The highlight is a very special recreation of the Monterey performance. As some of you might know, Joe Glaser wouldn't allow the Monterey performance to be filmed or recorded; there isn't a trace of it, just the 1961 studio album. But a couple of years ago, Hatschek visited Iola Brubeck and recorded her reading the narration, just as she did in Monterey. Using that and the original album (and a few short pinch-hit performances by University of the Pacific students), Hatschek edited it all together to create a facsimile of what happened in Monterey that evening. I've always LOVED "The Real Ambassadors" but listening to it with the narration made it come more alive than ever before. Stop what you're doing, head to the online exhibit and listen NOW! Here's the link to all of it:

And if you're in the California region and are sad that you missed this, don't worry, Hatscheck, Ms. Bavan and myself will be reprising our discussion at the Monterey Jazz Festival in September! I'll post more details as we get closer, but it's going to be a major event. Here's a photo of the three of us, the ambassadors for "The Real Ambassadors"! 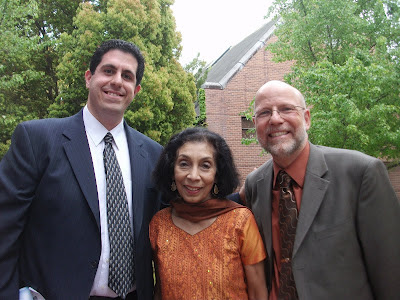 It's also an exciting time for Armstrong CD releases! April 17 will find the first official release of some of my favorite Armstrong broadcasts, taken from the New York nightclub Basin Street in May 1955. Live at Basin Street will be on the Mr. Music label and it should be a great find for All Stars fanatics. Thanks to the generosity of my European friends, I've had this material for years and have shared some of it on the blog in the past. I'm thrilled that it's finally getting an official issue. It's the Armstrong-Trummy Young-Barney Bigard-Billy Kyle-Arvell Shaw-Barrett Deems-Velma Middleton edition of the band, fresh of recording "Satch Plays Fats." Since Basin Street was an extended engagement, it allowed Armstrong to dip into his large repertoire bag for some things he didn't play too often in this period, such as "You're Just in Love" and "S'posin" with Velma. And even on the evergreens, there's some different and inspired playing on tunes like "Muskrat Ramble" and "Royal Garden Blues." Barney Bigard is so-so, continuing his bored playing from "Satch Plays Fats" (he'd be out of the band by September) but everyone else is on fire. Don't miss this release! (Again, I don't have it so possibly they screwed up the sound or something, but on paper, it's a can't miss!)

Then one week later, a release that's been getting a ton of publicity: the first official release of Red Beans and Ricely Yours: Satchmo at the National Press Club, containing a very late in the game (January 1971) performance by Pops. This was out briefly on LP but again, thanks to the generosity of my fellow Armstrong nuts, I've had a copy for years and again, I've shared some of it on the blog. But this is going to be an official release on Smithsonian Folkways so it will be in remastered sound and will contain bonuses such as a booklet of Louis's favorite recipes and recordings from a posthumous Armstrong tribute at the Press Club led by Tyree Glenn. Louis's set is about a half hour long, but it's great. He does some of his greatest hits, tells a bawdy joke and plays strong trumpet on "Sleepy Time" and "Hello, Dolly," the latter containing one of his finest solos from his last years. This issue is getting tremendous publicity (just google "Louis armstrong press club" and stand back), which also pleases me.

And I'll close by offering a couple of tantalizing morsels: I'm working closely with two major labels to get some rare Pops out of their vaults. One set is green-lighted and could be out this summer, the other is still in the planning stages. I don't think I can officially announce either right now but when I do, trust me, Armstrong fans around the world will celebrate. Stay tuned!