Pardon the title of this blog, which isn't an appreciation of Louis Armstrong's ability to take King Oliver's advice to "Play the melody, play the lead and learn." No, it's my way of announcing that as of 5:56 a.m. on May 31, I became a father for the second time, welcoming little Melody Patricia Riccardi into the world! My first daughter is named Ella but my wife and I vetoed any other immediate Louis-related names when choosing a moniker for our second: Lucille, Lil, Velma, Jewel, Bessie, Bertha, Alpha, Daisy, you name it, they were out.

But then I heard Louis's voice talking about the importance of playing the melody. And I thought of "The Song is Ended (But the Melody Lingers On)." And I thought of my wife and I and our mutual love affair of music. I suggested the name, my wife loved it and that's how a song was born.

So pardon me if I disappear for a slight bit into the world of diaper changes and midnight feedings but I wouldn't trade it for anything in the world. But don't worry, I won't be gone for long: do you know what else arrived at Random House's office today? Yes, the finished copies of my book. So indeed, I'm putting a red circle around May 31, the day my book and my baby--my two great creations--both arrived! I'm going to be posting much, much more about the book as we get closer but for now, it's back to fatherhood. Call me Papa Dip! 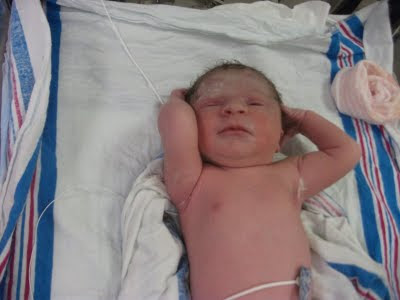