The surviving members of Louis Armstrong's All Stars have dwindled down to a precious few. There are four left, by my count: Jewel Brown, Buddy Catlett, Joe Muranyi and Marty Napoleon. All four deserved to be celebrated but this is an extra special week as Marty turns 90 on June 2! And don't worry, Marty is a very young 90. Don't believe me? Check out this video:

See? Marty's still going strong and he's still playing. I interviewed him at the Jazz Museum in Harlem a couple of years ago and was almost frightened by the accuracy of his memory. It's truly astonishing how much he can recall. The Jazz Museum posted 20 minutes of what was about a 90-minute interview on their website and I urge you to check it out because he has some great stories about Louis. Here's the link.
Marty's entire history is pretty fascinating but being an Armstrong blog, I think I'll focus on his multiple stints with Pops today. He joined in February 1952, replacing Joe Sullivan and stayed for about a year, a year that found the All Stars making one of their most successful European tours. As Marty tells it, he never really took piano features until Louis's group. Louis wanted Marty to listen to Earl Hines's "St. Louis Blues" feature but when Marty called it one night on the bandstand, he was nervous and stomped it off a little too fast. The results completely broke up the crowd and Marty had a feature that would perform almost nightly in his first go-around with the All Stars. Here's Marty absolutely tearing it up in Amsterdam on November 2, 1952:


Marty's other big feature in these years was "Sunrise, Sunset" from "Fiddler on the Roof." This feature was actually filmed in London in 1968 and though embedding is disabled by the uploader, you can watch Marty demonstrate why the piano is really a percussion instrument by clicking here.

And as a composer, Louis recorded two of Marty's compositions. One, "Mm-Mm," is a cute Louis-and-Velma Middleton duet recorded for Decca in April 1955. But the other one is much more interesting and is a real favorite of mine (and Ed Berger's, one of the few people I know who loves the song as much as I do!). The song is titled "Louie's Dream" and features Pops as co-composer. I've interviewed Marty two times and each time, ran out of time before I could ask him how this composition came about. Louis wasn't really one to throw his name on a tune if he had nothing to do with it, but it did happen occasionally, as he shared composer credits with Billy Kyle on "Pretty Little Missy" and "Throw It Out Your Mind," two songs that began as Kyle piano improvisations. The fact that "Louie's Dream" has that title makes me think that Louis must have had something to do with it; remember, he always said "Someday You'll Be Sorry" came to him in a dream so perhaps he dreamt up a lick and sang it to Marty, who fleshed it out. This is all guesswork, but the tune is charming. It was recorded for Brunswick in March 1967 and never issued on anything except a 45. Marty's introduction is wonderful and Pops, though he doesn't solo, plays some excellent lead horn for so late in the game. Dig "Louie's Dream":

Wee! On a personal note, I went to a centennial tribute to Louis at Carnegie Hall in 2001. Jon Faddis played the Louis parts and was sensational. The second half featured guest appearances by greats such as Clark Terry and Arvell Shaw. But then Marty came on and seriously wiped everyone out...and he was almost 80 at the time! Completely stole the show. Since then, Marty entered an assisted living facility to be with his ailing wife, who passed away two years ago. But he continues playing, especially for his fellow residents, as could be seen in that first video I shared above.

And please, if you're in the New York area this week, come to Birdland this Wednesday evening at 5:30 where David Ostwald's Louis Armstrong Centennial Band will be paying tribute to Marty's 90th with the man himself in the house. Will Marty get up and join the band? I hope so! Happy Birthday Marty! 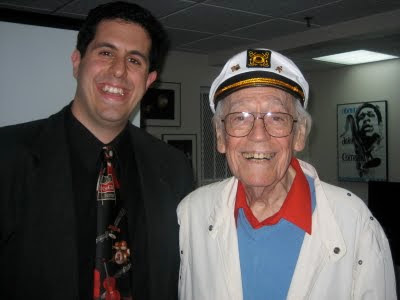