Today is a very special day in both the Armstrong community and the jazz world: it's Dan Morgenstern's 80th birthday, something truly worth celebrating. Any fan of Louis Armstrong has probably had his or her listening experience enhanced by Dan's peerless liner notes. His writing on Pops was my single biggest influence when I first got in him 14 years ago (this month, actually, October 1995), an influence that hasn't stopped as my own writings on Armstrong have spanned from college newspaper articles to a master's thesis to this blog to my upcoming book. And Dan hasn't stopped either, as his tremendously comprehensive booklet to this year's Mosaic Records collection of Armstrong's Decca recordings more than testifies.

I've written plenty of words in honor of Dan on this blog over the past two-and-a-half years and I could probably write an entire essay on the subject. But instead, I have different plans for today, something that I think is going to be a little more fun than a list of reasons of why Dan is great. Today, I'll be sharing the Slivovice interview.

The what, you say? The Sliovice interview, a legendary occasion for the crazed sector of Armstrong nuts that have heard and absorbed it since Phil Schaap used to play it during WKCR's Armstrong marathons. Here's the backstory:

In July 1965, the world was preparing to celebrate what was then perceived as Louis Armstrong's 65th birthday. Dan decided to mark the occasion by interviewing Pops at his Corona home in May for Down Beat's "Salute to Satch" issue. The resulting portrait would be published in the July issue. If you'd like to read it, it appears in Dan's indispensable Pantheon volume Living With Jazz. But if you'd like to HEAR it, you've come to the right place.

Though Dan had known Armstrong for about 15 years, he hadn't ever been to the Armstrong home. Thus, he asked Louis's good friend Jack Bradley to put in the good word. Jack did just that, got the okay and accompanied Dan on that day, taking a bunch of photos, some of which appeared in the final Down Beat article. Armstrong's career was just as busy as ever, but Dan actually caught Louis during a rare break. After a historic tour that found Armstrong breaking down the Iron Curtain by playing such places as East Berlin, Prague and Yugoslavia in March and April, Armstrong took over a month off for a dental procedure. I'm not sure what the procedure was, but I'm sure it was chops related. Armstrong's mentor King Oliver lost his chops because of bad teeth (pyorrhea) and Armstrong wasn't about to do the same.

Unfortunately, from what my ears tell me, Armstrong was never the same trumpet player after this procedure. His playing during the March 1965 tour featured some of his finest horn work of the decade. But beginning in the summer of 1965, I find his chops to have become much more erratic, both in live performances and with the All Stars. By 1966, he stopped taking solos on numbers like "Indiana" and "Muskrat Ramble" when he didn't feel like it and by 1967, numbers like "Basin Street Blues," "Black and Blue" and "Royal Garden Blues" were permanently retired, though they were all part of the 1965 tour. Of course, I am generalizing a bit; a concert I recently acquired from November 1967 (thanks Peter!) will blow the minds of any who detract Armstrong's final years.

But I digress. During Dan's interview, Armstrong was resting from the dental procedure, but about to embark on yet another tour of Europe. Surrounded by his friends Jack and Dan (with Lucille chiming in now and then from the background), Louis sounds very relaxed and friendly. But there was something else present that made for the relaxed atmosphere: a bottle of Slivovice plum brandy Armstrong brought back from Europe earlier that year. Slivovice (now known as Slivovitz) is still around as an online search quickly shows. Louis and Lucille both testify early on about the powers of Slivovice. They warn Dan and Jack that it's pretty much going to knock them on their asses. Dan and Jack are up for the challenge, so the bottle of Slivovice is cracked open. Not only will you hear the sound of ice clinking around the glasses during this interview, but you'll also hear Dan and Jack get progressively sillier as the interview goes on. Pops doesn't change much but the laughter certainly gets goofier towards the end.

Speaking of the end, I should mention the length of the Slivovice interview: two hours and ten minutes. Thus, I obviously don't expect anyone to set in front of their computer for the next 130 minutes and listen to every second of this. But I still want to share it and let it be known that it will always be here to savor if you want to listen to it in bits and pieces. And to make it easier, I've broken it into three small segments. Here's the 50-minute first part:

Oh, and as a postscript, I mentioned my trip to Jack Bradley's last week to pack up and gather the rest of his rare Armstrong treasures. I saw so many artifacts, my head spun, but none excited me more than this one: 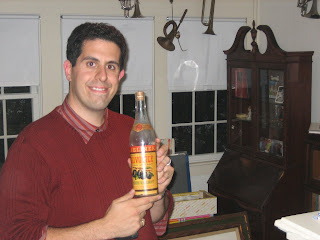 Yes indeed, that's the ORIGINAL Slivovice bottle polished off by Jack, Dan and Louis on that May day in 1965, now an artifact to be preserved and displayed at the Louis Armstrong House Museum. Incredible. So on behalf of all the Armstrong nuts from around the world, happy birthday Dan...and we hope you get to enjoy some Slivovice on this special occasion!
Labels: Louis Armstrong Jazz Swing Trumpet Satchmo Ricky Riccardi

Unknown said…
Wow! Talk about something you never want to end. This interview was like going to heaven - I got the chance to spend the afternoon with my hero and a couple of his close friends. Just marvellous! Thanks so very much.
October 27, 2009 at 7:03 PM