...And Our Baby's Crazy 'Bout Us! Yes, friends, yesterday morning, Sunday, April 5, your friendly blogger officially became "Papa Dip" as Ella Rae Riccardi was born at 8:28 a.m. I am home for one hour to gather some stuff before running back to the hospital but I wanted to share the news...which, of course means that this blog will be on hiatus for at least a week. But I killed myself in running up the number of posts over the last few months so now there's about 200 posts to choose from with about 400 music samples to listen to. Feel free to dig around some past entries while I learn the intricate art of diaper changing.

Of course, to die-hard Armstrong fans, April 5 is a significant date as that was the day Pops made his very first records in 1923 with King Oliver. Crazy coincidence, huh? I swear I didn't plan it that way!

But the baby's beautiful, weighing in at seven pounds and 14 ounces which isn't bad for 10 days early! She has my thick black hair and so far, even my demeanor, as she's barely cried for more than ten seconds at a clip. What an incredible feeling...

So it's back to the hospital for myself to spend the rest of the day with Margaret and little Ella. I'll back back as soon as the smoke clears...til then! 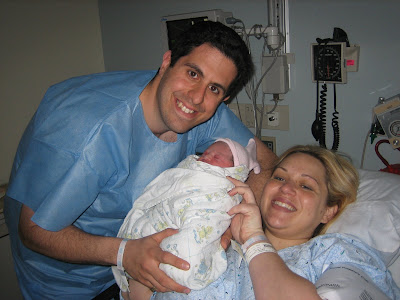 Anonymous said…
All good wishes for you and your family. Enjoy the time !!