Checking In From New Orleans

Hello, good readers and greetings from New Orleans! It's 10:00 on Thursday night and the wife and I are shot from our first two days in the land of the red beans. Things have been wonderful and it's safe to say that, even after only 36 short hours, there's no place in the world quite like New Orleans. Here's a photo tour of some of the things we've done on days one and two: 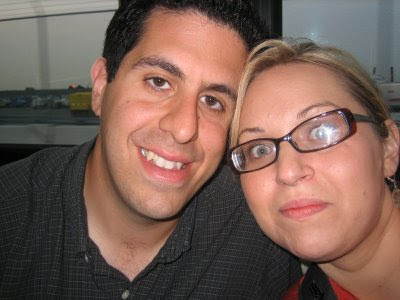 We woke up at 3:50 a.m. to catch our flight. Hence, I look like I partook in some of Pops's "mezz" while Margaret got just plain goofy.

We arrived at Louis Armstrong International Airport at 9:00, greeted as soon as we walked off the plane with a version of "Sleepy Time Down South" being pumped in over the airport's speakers. It was followed by a cover of Wynonie Harris's "Bloodshot Eyes." Yes, I was home...

The cab ride to the hotel was wild because it felt like driving through a virtual discography: Bourbon Street, South Rampart Street, Canal Street, St. Philip Street, Decater Street...it was almost impossible to find a street that hasn't been claimed by a New Orleans jazz tune. But finally, we ended up at the beautiful Hotel Provincial, a completely unique New Orleans experience, and much better than the cold Sheratons and Mariotts we passed on the way in. Here's some photos: 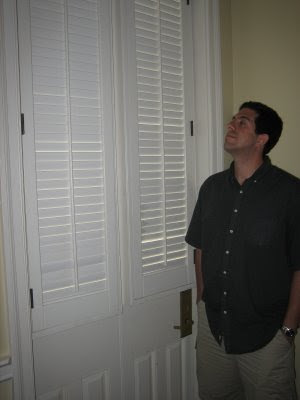 This is the first door that made me feel short. 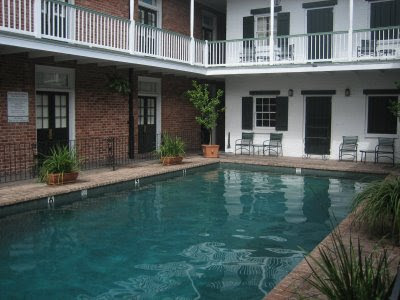 This is one of two pools, located in gorgeous courtyards (yes, this is still a Louis Armstrong site and not a travel blog...I'm on vacation so deal with it!)

Then it was time for lunch and like the pied piper, the sound of live jazz led us to the Market Cafe, where I indulged in a roast beef po' boy sandwich, the kind Pops used to write about. I wanted to take a picture of it but it was gone before I remembered. Here's the aftermath: 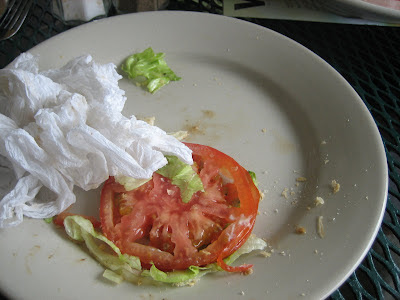 There was a nifty little jazz quartet, playing favorites like "Lazy River," "Way Down Yonder In New Orleans," "Undecided," and "Sweet Georgia Brown"...not unlike an All Stars set from the Edmond Hall years! As the picture shows, they played for tips... 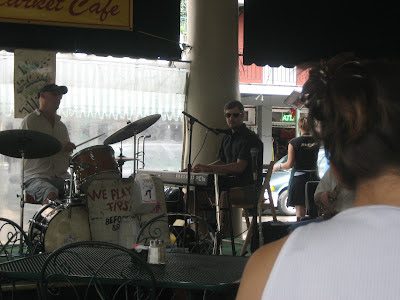 Then it was time to walk around, catching all the neat old French Quarter buildings, like this one: 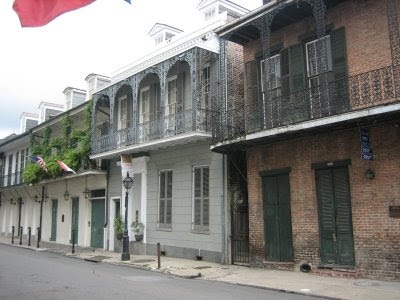 And this palace located in Jackson Square: 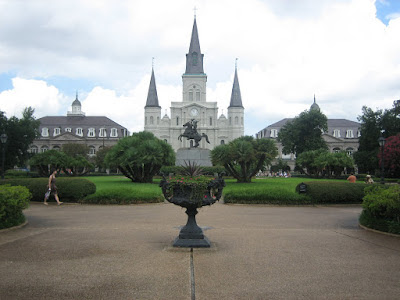 And I guess there's no place else in the world where you can find children's toys and voodoo dolls sold...in the same store: 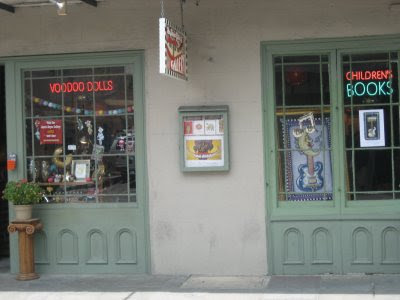 That's all well and good. Me? I immediately wanted to make a beeline for the Louisiana Music Factory since they house the kinds of New Orleans jazz CDs that you just don't find in stores anymore, even in New York. Naturally, I made a killing: 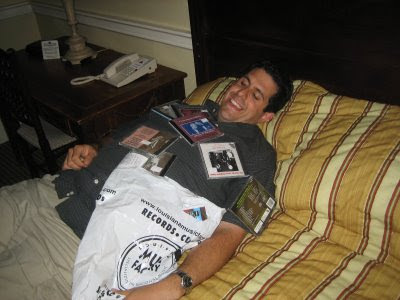 If you look closer, those are two Captain John Handy discs, two from Kid Ory and Red Allen, a reissue of Kid Ory's 1946 Columbia album, a Billie and DeDe Pierce set from 1967 and a George Lewis concert from 1959. It is heaven, right here on earth, I tell ya...

More sightseeing led us onto one of the streetcars Armstrong wrote about in his autobiography. In fact, the New Orleans streetcar system is the oldest running one in the United States (touristy information, I know): 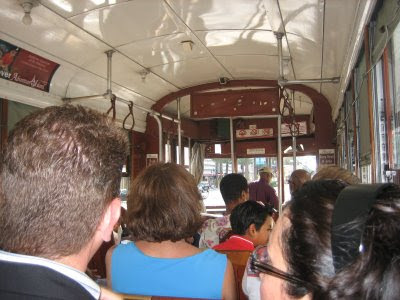 Here's a street sign for Bourbon Street, in honor of Pops's version of "Bourbon Street Parade" with the Dukes of Dixieland: 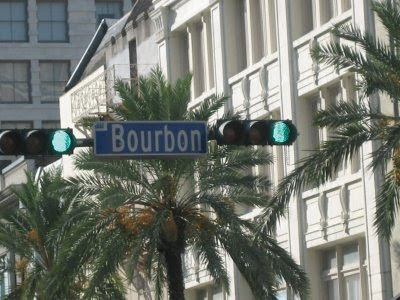 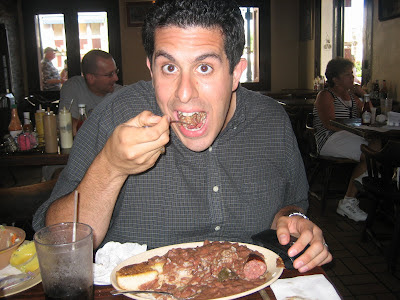 And a trip to the aquarium led to me needing to take a picture of this "big ol' rusty alligator," as Pops would have said: 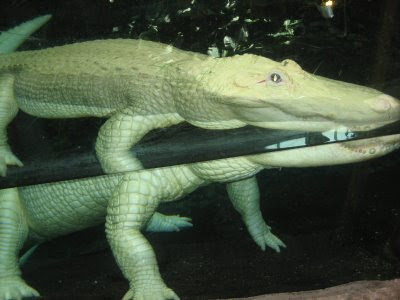 I was scared of it as it was of me, so yes, that water would not have been fit to drink! 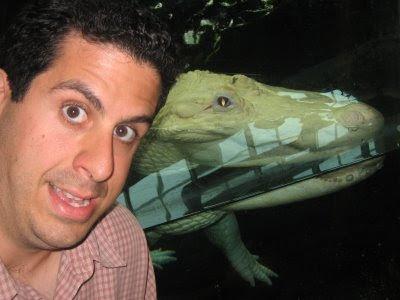 Tonight was the welcoming reception and it truly felt like heaven for a nobody like me. Here are some pictures my wife took so I can tell my grandkids. Since I won't have grandkids for at least another 25 years, my blog audience will have to do for now! 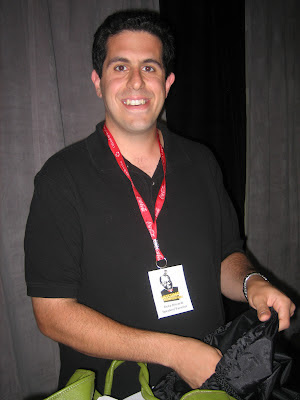 Armed with a nametag and a welcome bag filled with Italian fig cookies (they know my reputation), I was armed to mingle with my heroes. 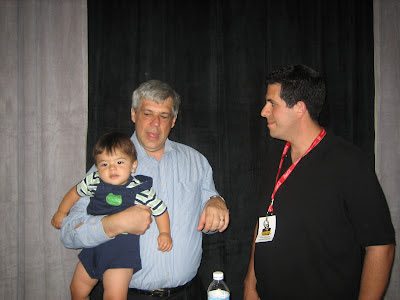 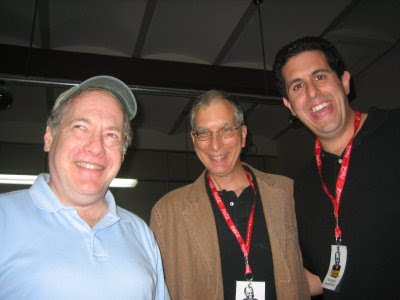 That's me, Michael Cogswell of the Armstrong House and Museum and Gary Giddins, author of Satchmo, the book on Armstrong that sent me on my mission over a decade ago (Giddins is down here to celebrate the 20th anniversary of that landmark work). 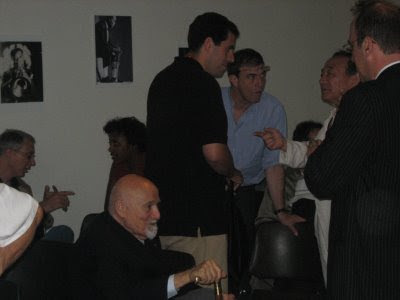 An action shot that finds myself surrounded by Michael Cogswell, George Avakian, David Ostwald, Yoshio Toyama and festival organizer Jon Pult. The Toyamas of Japan were an absolute pleasure and I cannot wait to hear Yoshio play trumpet tomorrow. Here's another shot from the same scene, this time with Yoshio's banjo-playing wife Keiko to the right: 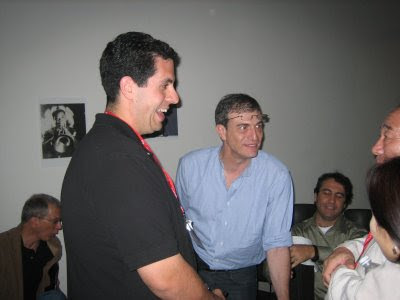 And finally, a shot of myself and the legendary George Avakian, one of my heroes. Avakian delivered a touching keynote address on his relationship with Pops that will definitely go down as a highlight of the weekend: 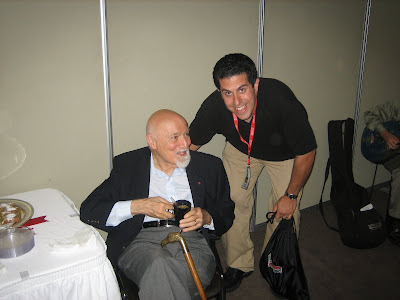 After the wonderful reception and address (they practically had to throw us out of the building, there was so much Pops talk going on), my wife and I joined Michael Cogswell for dinner at Mona's, a wonderful little spot specializing on Middle Eastern food (great gyro). If you're a hardened Armstrong fan and supporter of this blog and you've made it this far through my travelogue, then here's some breaking news for you: MIchael announced that the Fleischmann's Yeast Broadcasts double-disc set is finally going to be able for actual purchase online and as a download in August! No more need to join any C.D. clubs or anything. A press release was published on the official Armstrong House website today, Satchmo.net. You can read it in full there, but here is an excerpt:

"This set, released by Jazz Heritage Society, is currently available on CD exclusively via retail at www.JazzStore.com, and via membership in the Jazz Heritage Society at www.jazzheritage.org . Visitors to the Louis Armstrong House Museum can purchase the CD at the Museum’s shop. On August 12, this unique recording will be available digitally at iTunes, and on August 19 all digital downloading sites worldwide will be authorized to sell this title. (Note: many international sites will determine their own release date.)"

Victory for Pops! And victory for all the listeners who will now get to experience all the glories of this set.

And that's all for now and probably for a while as the next two days are packed with seminars, parties, eating and anything else you can think of. There's a Satchmo Club Strut tomorrow night that will have some of New Orleans's finest musicians playing all night long downtown and on Saturday, the wife and I are making our pilgrimage to Preservation Hall. Thus, I'll try to write more on Sunday or sometime after my return on Monday. And the subject for my return blog will be an easy one: "Do You Know What It Means To Miss New Orleans." Til then!
Labels: Louis Armstrong Jazz Swing Trumpet Satchmo Ricky Riccardi

Anonymous said…
There are only four truly unique cities in the United States, New Orleans, San Francisco, San Antonio, and New York. The rest all look the same. If you were dropped blind folded in downtown Houston, you could not tell the difference from downtown De Moines.
August 2, 2008 at 11:59 AM