Hello all. I’m back from my trip to Houston and wanted to write a quick “odds and ends” column about the trip, the past year of Armstrong releases and what to look forward to in 2008. First, the Houston visit was mainly to visit my wife’s best friend, who had a baby just last month. But I did manage to get my wife, her friend AND the baby to come along as I visited Jewel Brown on December 26. I had already interviewed Jewel at length over the phone for my book but this was the first time I had ever met her in person. She’s a dynamo, full of life and wisdom and you can’t help but get swept away by her personality. One of the highlights for me was watching her watching some very rare footage I had brought of her performing with the All Stars in 1964. She got such a kick out of watching her old self, joking about her Asian-looking eye makeup and how she had her hair pressed and not permed!

And though it wasn’t a formal interview, she still gave me some good stories. As always, I’d like to save them for my book, but I will share this one. She remembered a time shortly after “Dolly” hit that one of the band members (she wouldn’t specify) lit up a “special cigarette.” Pops looked at him and said, “No, man, we can’t do that shit no more. We done got too big!” Anyway, here’s a picture from my visit with Jewel. I couldn’t help but notice a bottle of Swiss Kriss on her desk. No, she never took it—not even with Pops—but she kept it as a souvenir and I had to include it in the shot (though, no, I am not 11 feet tall and I don't have naturally red eyes): 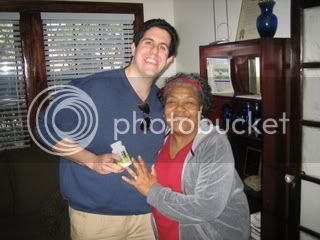 Moving on, 2007 was a decent year for Armstrong C.D. releases. Of course, the one outstanding release was Storyville’s four-disc In Scandinavia box, which I’ve written much about. As compiled by the oracle of Armstrong, Gösta Hägglöf, this has become, to me, an essential document of the All Stars and it’s a bargain to boot (available for as low as $27.94 on Amazon).

2007 also saw the release of Armstrong’s Monterey Jazz Festival set from 1958, which I have also written about in a past blog. It’s a fun night and a great show but it also gives the listener the opportunity to hear Armstrong battling with his chops. You can hear the pain and see how he had to pace himself to make it through the night, but he puts on a helluva show and he never stops going for the high notes. For a better picture of Armstrong’s playing in 1958, check out Live In North Bay Ontario, available on worldsrecords.com. It’s become one of my favorite live All Stars shows because Pops is in peak form throughout, fielding requests for different material such as “Long Gone” and coming up with new variations on pieces like “Muskrat Ramble” and “You Can Depend On Me.”

In my last “Odds and Ends” column from November, I wrote about the “Essential Jazz Classics” label finally releasing Armstrong’s complete output with the Dukes of Dixieland. The three-disc set came out in November and I quickly swiped up a copy.

I was thrilled to finally have all this material in one place, including the alternates, but my enthusiasm soon went down the drain. First off, “Wolverine Blues” is still edited, as it was on the Blue Moon disc of about ten years ago. This infuriated me because it became quite clear that the Essential Jazz Classics people just copied the Blue Moon discs I had listened to for years, right down to the botched “Wolverine Blues.” Also, when it came to the alternates, they tacked them on at the end of disc two and disc three, keeping the masters separate. Naturally, the first thing I did was reorganize them on my Itunes so I could hear the master and alternate together since Pops did so much improvising on these dates. And as far as the alternates go, they just transferred them straight from the Chiarscruo LPs, not offering any remastering in process. So, I already had the Blue Moon discs and I already transferred the alternates to CD without using any remastering so basically I spent $30 for a nice cover photo.

Oh well, if you don’t have this material, make the plunge as it’s essential latter-day Armstrong and it is nice to have it together in one set…one half-assed set.

Better news came from the Swiss TCB label, which issued an All Stars concert from Zurich, Switzerland from October 18, 1949. The sound quality is great, everyone in the band sounds wonderful and Pops is particularly inspired, coming up with all sorts of new ideas on the likes of “That’s a Plenty” and “Royal Garden Blues.” Even “Velma’s Blues” gets a rare encore and “The Hucklebuck” turns into an extended blues jam session, with everyone soloing (Barney dipping into his “C Jam” bag…remember when “C Jam” incorporated “The Hucklebuck” for a brief time?). Unfortunately, TCB shuffled up the order, which makes no sense since Armstrong was the master of pacing a stage show (Armstrong’s announced “opener” of “Struttin’ With Some Barbecue” doesn’t appear until track five!). Also, the interesting liner notes aren’t attributed to anyone in particular and some of the photos passed off as being from this visit, actually come from a later Switzerland visit from October 1955. Oh well, the music’s still great. If you’d like to preview it, some of the tracks were aired on a Swiss Radio show. Go to the following website and click the flashing icon next to the date, Mardi 13 November 2007
http://www.rsr.ch/espace-2/jazzz/selectedD...3/11/2007#mardi

Now, because I’m a freak, I paid the extra money and ordered it from a UK website so I could listen to it as soon as possible, but it looks like it will be available in the United States on February 12. It can be pre-ordered from cduniverse.com for $12.65. Check it out:

There was nothing to report on from the DVD front but YouTube continued to be a constant delight, providing plenty of rare Armstrong clips throughout the year. Here’s a recent one from my good friend, Ingo Ruppert, Armstrong and the All Stars, in their prime, playing Cole Porter’s “Blow Gabriel Blow” from a 1956 Ford Star Jubilee tribute to Porter. The band features Armstrong, Trummy Young, Edmond Hall, Squire Gersh and a relentlessly swinging Barrett Deems. Enjoy!

Looking forward to 2008, the biggest news concerning Armstrong seems to be the hopeful release of Armstrong’s 1937 Fleishmann Yeast Shows on the Music Masters label. Michael Cogswell and Dan Morgenstern have been telling me about this possible release for two years now but there’s been a tremendous amount of hiccups along the way. However, the last time I visited Michael, he told me they had the broadcasts sounding better than ever and Dan recently told Marc Myers’s JazzWax blog that he is currently finishing the liner notes for the set, which will also contain some treasures from Armstrong’s private tapes. This should be a huge release and I just hope it gets the same amount of respect given by the jazz world to recent discoveries by Monk, Miles, Mingus, Bird and Diz.

On a sad note, we also said goodbye to Armstrong’s long-time drummer Danny Barcelona this year. Barcelona was like an invisible man to most jazz historians. Picture being with Louis Armstrong’s band night-after-night for 13 years…and never being asked for an interview! So many books and articles were written on Armstrong but Danny lived with his wife and family in California, playing golf and enjoying life. Finally, with the help of Lewis Porter, I located Danny in 2005 and struck up an over-the phone friendship that resulted in hours of interviews, birthday phone calls and the sending of rare performances on DVD and C.D. to his home. Danny passed away at the age of 77 on April 1, 2007 and I miss him tremendously.

And as the whole world knows, Oscar Peterson died just last week. As a pianist, I worshipped at O.P.’s feet and I treasure the two occasions I saw him perform live at Birdland in 2004 and 2006. I regret not having had the opportunity to interview Peterson since he didn’t even mention Armstrong’s name in his otherwise terrific autobiography. I’ve always loved Peterson as an accompanist and he always gave Armstrong wonderful support on their three albums together (two with Ella). Please take out Louis Armstrong Meets Oscar Peterson and enjoy this marvelous, neglected album as a way of remembering Peterson. In fact, I got to do that in a third-hand way during my Houston trip. I found out Oscar did and two days later, visited Jewel Brown. While having lunch at a Whattaburger that was playing a ceaseless mix of country hits, all of a sudden “Let’s Fall In Love” from that album appeared from over the loudspeaker. At first, I felt sad, but damn, it’s such a joyous track that I couldn’t help but smiling and nodding as Pops picked up his horn and Oscar began backing him so wonderfully. Call it a sign, call it creepy, call it whatever, but for me, it was a pretty great moment (and the burger was good, too).

Well, that’s all I have for now. As for me, I’m looking forward to another year of keeping this blog going and meeting more and more wonderful Armstrong fans from around the world. As always, please e-mail at dippermouth@msn.com if you have want to talk Pops, or just leave a comment on the blog. On April 16, I’ll be showing some rare footage of Pops at the Institute of Jazz Studies (which footage? Come and find out!), so that’ll be exciting, I hope.

But it’s New Year’s Eve and before I set out for playing my five-hour gig tonight, I must spend some of it with Pops and fortunately, I have some live Armstrong broadcasts from New Year’s Eves past. So which one do I choose? New Year’s Eve 1953 from Yokohama, Japan? New Year’s Eve 1954 from the Down Beat in San Francisco? New Year’s Eve 1962 from the Coconut Grove in Hollywood? So much good music to choose from but you can’t go wrong as long as it’s Pops. Happy New Year!
Labels: Louis Armstrong Jazz Swing Trumpet Satchmo Ricky Riccardi