"Heart Full of Rhythm": The Unveiling!

One of the main reasons I revived this blog is to use it as a way to beat the drum for next book, Heart Full of Rhythm: The Big Band Years of Louis Armstrong, due out from Oxford University Press in mid-September. Well, if it's drum beating you want, consider this post to consist of a couple of choruses of "Mop Mop" (as played by your favorite All Stars drummer). 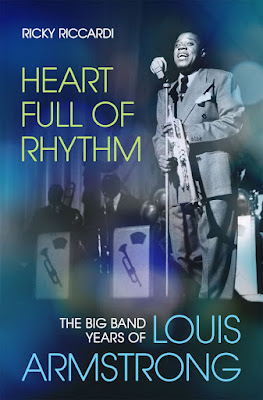 Isn't that swell? (Cover photo of Louis taken onstage at Loew's State Theater in New York City in the fall of 1943.)

Next, the official listing for the book is live on the Oxford University Press website HERE. If you head there, you can even check out the Table of Contents to see how the book is broken down.

And finally, the book is now listed on AMAZON so feel free to check it out over there and even pre-order (the price will definitely drop as we get closer). Bless my friends, too, as I posted this on Facebook yesterday and buy this morning it was the #1 best selling new release in the Popular Music category! Wish it could remain that way but eight months is a long ways off.

Yes, I should actually repeat that again, but for all of this excitement, the book is not due until mid-September. Even on the above links, the page count will probably change, the number of images will definitely change (we settled on 40), I've reached out to some heavy hitters for blurbs and oh yeah, the book is still going through a through copyediting phase as I write this.

Sooooo....how do we keep ourselves occupied for eight months? Well, I've got a billion things on my plate but I do want to keep the blog rolling and not just for promotional purposes. I'm feeling crazy and don't want to make promises I can't keep but I think this could be cool: beginning next week, every weekday I will post Spotify links to a Louis Armstrong single.

What am I referring to? I'm an idiot completist who needs everything and likes to arrange it all in painstaking, chronological order. But in the years covered by my book--1929 to 1947--Louis's new music was issued as singles on 78, two songs per disc, no more, no less. And it's interesting to see how the labels sometimes paired tracks from separate sessions to make the finished product. Everything is on Spotify and I already went through the trouble of making a playlist of all of them....270 in total, making for 135 days of Louis Armstrong singles.

I'm NOT promising to write my old 10,000 word essays on each blog, but I'll say a few words if the spirit hits me. Each track is about three minutes so I think it's a good thing if the world carves out six minutes a day to spend with Satch. Oh! Six Minutes With Satch. A series is born.....

Okay, let's see if I actually pull this off. But in the meantime, thanks for all the early buzz around the book--hope Armstrong fans around world love reading it as much as I loved writing it!