Louis Armstrong and His Hot Five
Recorded February 22, 1926
Track Time 2:33
Written by Paul Barbarin and Luis Russell
Recorded in Chicago
Louis Armstrong, trumpet, vocal; Kid Ory, trombone; Johnny Dodds, clarinet; Lil Armstrong, piano; Johnny St. Cyr, banjo
Originally released on Okeh 8318
Currently available on CD: Both the JSP and Sony Complete Hot Five and Hot Seven boxes have it (I like the JSP better but the Sony has much better packaging if you go for that sort of thing)

In November, I celebrated the 90th Anniversary of the first Hot Five session, a celebration I'll be continuing this week with a blowout post on the SIX recordings the group churned out on February 26, 1926. That blog is already in the can and will post on Friday, but what about "Come Back Sweet Papa," the lone Hot Five number recorded in between these two historic sessions? I think it's time to take a look on this Hot Five gem, recorded 90 years ago today.

Probably because of the odd-numbered amount of tunes recorded on November 12 inaugural session, OKeh's E. A. Fearn knew he'd have to make a fourth side sooner or later to balance everything out. That side was knocked out on February 22, 1926, the start of a busy week of recording activity for young Louis Armstrong: between February 22 and February 26, he'd be a part of 16 separate sides as either leader or sideman!

For the February 22 date, Louis once again reached back to two of his New Orleans homeboys, Paul Barbarin and Luis Russell--then working with King Oliver in Chicago--for their composition, "Come Back Sweet Papa." One of my theories is that with the formation of the Hot Five, Louis wasn't looking to obliterate his New Orleans roots in the quest to turn jazz into something more modern ("a soloist's art"), but rather, wanted to pay tribute to those roots, hiring three musicians from the old Kid Ory band (including Kid Ory) and performing compositions by longtime associates such as Barbarin and Russell. He never forgot his roots. (And here's Armstrong fronting Russell's orchestra with Barbarin on drums just a few years later!) 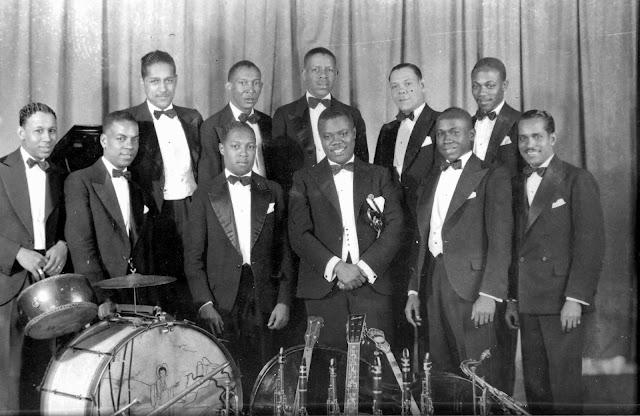 Here's how "Come Back Sweet Papa" came out, 90 years ago today:

As in the first session, this isn't quite the ensemble-fueled "jam session" some folks like to believe the Hot Five embodied. This is a well-rehearsed outfit who liked their music arranged. Thus, there's a neat introduction based on the tune's inherent four-note ascending motif, Armstrong and Ory swapping lead and breaks.

Where's Johnny Dodds through all of this? Oiling up his alto saxophone for a melody statement that has not held up very well. I love Dodds's hot clarinet playing where even his sometimes stiff phrasing can be overlooked because of the sheer emotion of his playing. But here, he's playing alto with a queasy tone and basically reading the melody off the lead sheet as stiffly as human possible.

It's a rough outing, but it only makes what follows so incredible: Louis steps up to deliver the melody in his own fashion and probably looking at the same lead sheet as Dodds, he makes it his own and more importantly, he swings. As Andre Hodier wrote, "In respect to swing, Louis cannot in any case be compared with his sidemen in the early Hot Five, whose rhythm is extremely weak. Listen to Johnny Dodds's alto solo in 'Come Back Sweet Papa.' Isn't it an excellent sample of not getting the notes in the right place, rich in rhythmic faults and anti-swing if anything ever was? Now listen to the next chorus, in which Louis is perfect; he seems to want to give the clarinetist a lesson in swing." Oof, that's harsh (sorry, Johnny) but I can't really argue with it.

But oh, that ensemble chorus is a joy! Not only is Louis's lead so relaxing, but Dodds's switches to the more effective clarinet and Ory is feeling super punchy with his energetic tailgate playing. The only way to top it is with some delicious breaks towards the end by young Louis.

This is followed by the then-common practice of playing the verse, again, set up by a dazzling Armstrong break. In the middle of the verse, Armstrong uses an example of flutter-tonguing, putting an almost "angry" spin on a note (he didn't do this often but always did it effectively; see Trummy Young's later feature "T'ain't What You Do" for good examples).

We're only at the 1:47 mark, but the band decides to only do one more chorus, the first half of which is taken up by a meaty two-fisted piano attack by Lil Hardin Armstrong. Louis re-enters with a searing held note and continues keeping the melody front and center, Ory really raising hell behind him. A short stop-time section allows Armstrong to float a bit before the arranged ending, complete with stop-time break.

"Come Back Sweet Papa," to me, is a great recording for that middle ensemble chorus alone (and yes, I've used it lectures to illustrate the rhythmic difference between Armstrong and Dodds and as an example of what swing is all about) but it's never been one for the pantheon (though it has inspired some very nice recordings, including an early one by Bob Crosby). The real biggies would be recorded later that week so come back sweet papas--and mamas--to get the full scoop on those.